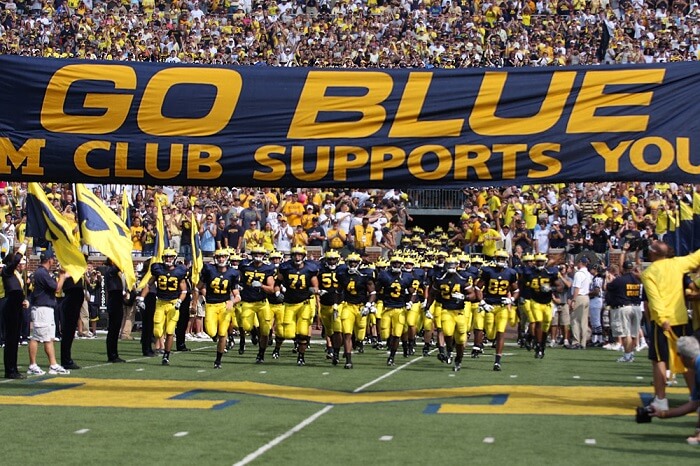 Welcome to Twelve in the Box. Here, you will see twelve teams making the biggest impact on college football. Is this a CFB week 11 ranking? Not really—you won’t find any numbers by the team names. Is this a power ranking? Sort of, kind of. The Judge, here, will use his arbitrary sliding scale of indiscriminate factors to present the twelve teams (and three alternates) that Your Honor thinks you need to be paying attention to.

Week 10 threw us an absolute haymaker as we saw three teams ranked in the top 10 go down. Alabama, Clemson, and Tennessee’s playoff hopes took the brunt of that punch. The postseason is continuing to take shape, but there is plenty of room for chaos. We are inching closer to the finish line and all we can do is hang on to our seats and appreciate the wild ride of a season that 2022 has delivered.

There was a low tide in Baton Rouge when Alabama dropped their second game of the year against LSU. If you listen to the talking heads, you might even think Alabama is fighting for a bowl appearance and the program is disintegrating before our very eyes. That is just what the standard has become for Alabama under Nick Saban. So yes, the Crimson Tide will have to wait another year before getting a chance at another championship. But no, the sky is not falling, and this is still an elite program.

Next Game: at Ole Miss

This was a put up or shut up game against Notre Dame and we got our answer. Clemson had a chance to silence the doubters and stamp their playoff application with a win in South Bend. Instead, they laid an egg, going down 28-0 before eventually losing 35-14.

We saw more quarterback issues with DJ Uiagalelei being replaced for a second straight week. The winners here are college football fans because they won’t be subjected to watching an undeserving team in the playoffs.

Next Game: vs. Louisville

If there was any doubt whether Georgia would put it all together before the postseason, we saw exactly what the Bulldogs are capable of in Week 10. That is shutting down the nation’s top offense and holding them without a touchdown until late in the fourth quarter. The Dawgs are one conference win away from locking in a trip to the SEC Championship game. That game appears to be a mere formality on the way to two more important ones.

Next Game: at Mississippi State

Hugh Freeze has this Liberty team sitting at 8-1 and is making life miserable for big programs. The Flames captured a road win at Arkansas in Week 10, but that shouldn’t come as a surprise to anyone. This is the same team that took Wake Forest to the wire and blew out BYU. What Freeze has done with this program is exactly why, despite any past transgressions, he will be considered for another shot at a big-time job. Until then, Liberty will continue to keep Power 5 opponents up at night.

Next Game: at UConn

The Tigers pulled off an incredible overtime victory over Alabama in Week 10 launching them up this CFB week 11 ranking. They rolled the dice and connected on a two-point conversion to get the win. LSU doesn’t just find themselves on the good side of an upset. They find themselves now in first place in the SEC West, needing two more wins at Arkansas and LSU to clinch a spot in the conference championship game. Brian Kelly’s team has made some impressive strides this season. How bad would the Tigers like to have back the end of that Florida State game?

Next Game: at Arkansas

The Wolverine defense showed out in Week 10, holding Rutgers to 180 total yards of offense on the way to a 52-17 win. Michigan shares first place in the Big Ten East with Ohio State. All signs point to The Game deciding who will play for the Big Ten Championship and go to the playoffs. With the way things are shaping up, it is possible that Michigan could make it in without beating Ohio State. They will need to take care of their next two opponents, Nebraska, and Illinois, before that talk can start.

Next Game: vs. Nebraska

Wow, that was an ugly one. The Buckeyes struggled on the road against Northwestern and made it out alive with a 21-7 victory. Is it fair to be concerned about the Buckeyes at this point? Maybe, a little. However, Ohio State is still finding a way to win. In a week where top teams fell on the road, that was all that was needed. The Buckeyes are still cruising for a showdown against Michigan to finish the regular season. However, if Week 10 told us anything, Ohio State should be very careful at Maryland in Week 12.

Next Game: vs. Indiana

Ole Miss enjoyed their bye week and looks forward to hosting Alabama for Week 11. Never mind that Alabama saw their playoff hopes dashed in Week 10. This one is a good old fashioned grudge match as Lane Kiffin surely has some tricks up his sleeve for former boss Nick Saban. The Rebels are also playing for a spot in the SEC Championship game. They will need to win out and need LSU to lose to make that happen, but a win against Alabama would go a long way.

Next Game: vs. Alabama

The Ducks cruised to a 49-10 win at Colorado in Week 10, extending their winning streak to eight. Oregon is now gearing up for a challenging finish. The Ducks will host Washington and Utah before finishing the season at Oregon State. Three wins and Oregon will be knocking on the door of the playoff. Could a non-conference champion jump a one loss Pac-12 champion Oregon for a playoff berth? Oregon would like to be in the position to find out, but they need to play well to avoid making that a tough decision.

Next Game: vs. Washington

USC is finding a way to make every game interesting, which is not a good thing. The Trojans defeated a Cal team with one conference win by a six-point margin in Week 10. The offense is not the issue with this team as Caleb Williams posted another four-touchdown game. Not to mention two Trojan running backs eclipsed the 100-yard mark. The defense has given up at least 35 points in each of their last three games. The Trojans will need to win out and have some lucky breaks across the country if they want to make the playoffs.

Next Game: vs. Colorado

This TCU team just keeps finding a way to steady this ship amidst adversity and win games. The Horned Frogs have now won five straight games by a total of ten points or less. That is not a knock at TCU, as three of those games were against ranked opponents and another one was on the road. TCU has a chance to legitimize its candidacy for a playoff appearance with a road win against Texas in Week 11.

Next Game: at Texas

Tennessee’s scorching hot season took quite a dousing in Week 10 after a 27-13 loss at Georgia. Unfortunately for Tennessee, it was not a loss that inspired confidence in their chances if a rematch were to occur. It was so bad they were almost kicked out of the CFB week 11 ranking altogether. That is the key for Tennessee now that they have a loss. If they hope to make a playoff, they need to look like the team we saw against LSU and Alabama. Oh, and they will most likely need some help from other teams along the way.

Next Game: vs. Missouri