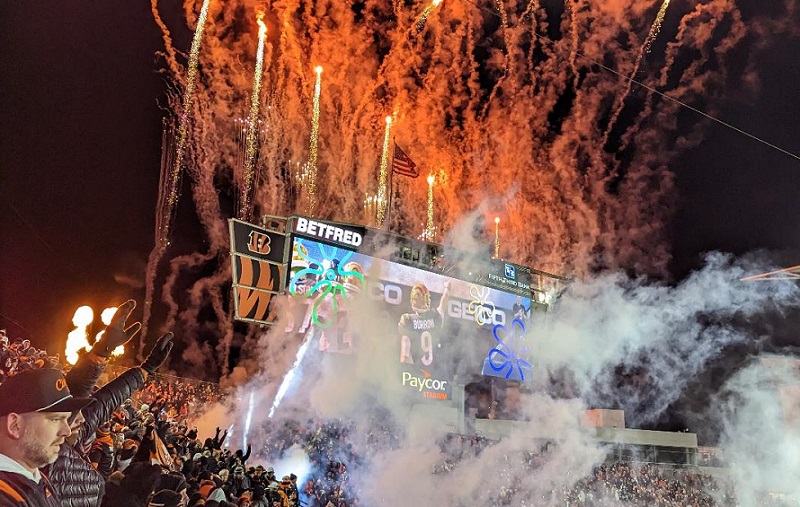 The Bengals gave everyone a scare on Sunday night, but managed to put the game away behind a scooped fumble recovery for a touchdown by Sam Hubbard. The Bengals will now turn to face the Buffalo Bills for the first time following the tragic Monday night game. Let’s look at the Bengals WildCard Review and key takeaways from the game.

Is anyone else’s blood pressure still through the roof after last night’s victory? I know mine is. At this point, I have watched the clip of Logan Wilson punching out the ball and Sam Hubbard returning it for nearly 100 yards over ten times. Sunday night was exactly what I thought it would be, an AFC North ugly battle between two teams who know each other very well. It certainly wasn’t pretty, but that doesn’t matter in football, especially come mid-January. Just as Cincinnati made a run last year in the playoffs, the defense managed to make a play that ultimately won the game. I think the entire league understands that you can never count out this Bengals team or Lou Anarumo.

Looking forward, Cincinnati will now have to travel to Buffalo (don’t get me started on how unfair this is) to take on the Bills for a rematch that didn’t get completed just weeks earlier on Monday Night Football. For Cincinnati to come out of this game victorious though, they will have to play much better come kickoff time against the Bills. On the other end of the bracket, the Chiefs will be taking on the Jaguars. While many are counting out the Jaguars, they have played some good football down the stretch and Kansas City nearly lost a few games against bad opponents at the end of the year. Hold on tight Bengals fans, as we have another crazy ride ahead of us!

The one and only, Bootsy Collins kindly joined Matt’s Take this week. William Earl “Bootsy” Collins is a Cincinnati legend and a famous bass guitarist and singer. He is known for his widespread genres of funk, hip hop, soul, and rock music. Bootsy is a member of the Rock & Roll Hall of Fame and has spent time in his career playing with many others such as James Brown, Snoop Dogg, and George Clinton. Rolling Stones even has Bootsy listed as the 4th greatest bassist of all time! As my wife and I were at Bengal Jim’s tailgate before the game, we were lucky enough to meet up with Bootsy, as well as watch his awesome halftime performance. Bengals fans were more than ecstatic to “crank it up fool” as we awaited an exhilarating 2nd half of football.

Q: What has been your favorite moment in your long career?

A: “Hahaha, wow that is a loaded question, but the best moment was when I played my 1st gig with my elder brother Phelps “Catfish” Collins. I always looked up to him & wanted to be just like him. We played our 1st gig in a Rathole, but it was so much fun.”

Q: As a member of the Rock & Roll Hall of Fame, how did it feel when you learned you were going to be inducted?

A: “I didn’t know how I felt or how I had got there, but the feeling was like jumping off the highest mountain in the world just to discover I had Wings! I would have never known that honor had I not made that jump.”

Q: What has been your favorite show that you have ever put on and where was it?

A: “It was in LA at Mavericks Flat in 1972/73 when we pulled into town in two station wagon cars with Ohio license plates. Unbeknownst to us, 11 inmates had escaped from Ohio prison. So guess who the LAPD pulls over as soon as we hit town? Yep, we did look guilty, but we didn’t do it your honor, I promise (Lol). Well after the people demanded that they let us out to play the gig at Mavericks flat plus a mere 5000.00 bail, we were spared. The rest of this story will be in my 2023 book!”

Q: As all fans are excited for your halftime performance on Sunday, what is your score prediction for the game?

A: “You know I’m not good at predictions, but I feel like we have to come out blazing, so I’d say Bengals by 7 points.”

Q: If the Bengals would happen to win the Super Bowl, can we expect another performance from you!?

A: “Wow, do you know how long it has taken to get 4 minutes of Funk at a halftime show? I feel that we are so blessed to be able to perform in front of a multi-cultured audience, whom for the 1st time never knew what a Bootsy was. My Mother named me that & I asked her why she named me that. She said, because u look like a Bootsy! Well I guess I will leave that one alone. The Funk will not be denied, we shall funk until the end of time! Bootsy baby!”