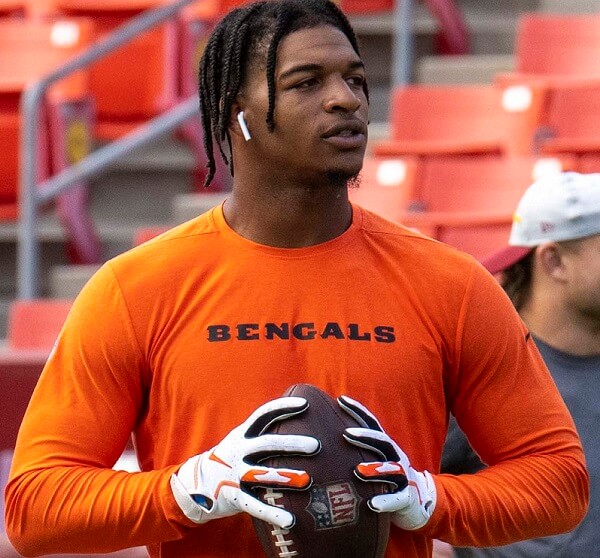 The bye week was much needed this week for the Bengals roster, as this team needs some time off, time to get healthy, and time to prepare for the second part of the season. In this weeks Matt’s Take, I’m joined by Ja’Marr Chase’ father and Dan Hoard. We’ll also take a look at the current state of the Bengals during their bye week, including the Bengals record. Plus, what are the Bengals divisional standings and how do they stack up.

Q: At what point did you realize Ja’Maar was an NFL caliber player?

A: “After the championship year at LSU, he faced several big-time corners and he showed out against all of them.”

Q: What are you most proud of with Ja’Marr outside of football?

A: “I found out after he opted out of college football that he was still enrolled in school at LSU online.”

Q: What does Cincinnati need to do to be back in the Super Bowl?

A: “Finish up strong, they have a tough schedule and if they can get through that schedule with 2 or less losses, they’ll have a great chance at getting back to the Super Bowl.”

Q: When do you expect Ja’Marr to be back on the field?

Q: Which flavor of his chips are your favorite?

A: “His barbecue flavor is my favorite chip.”

If you have ever listened to a Bengals game, then you definitely recognize Dan Hoard, as he teams up weekly with Dave Lapham to give in-depth knowledge to the Cincinnati fan base week-in and week-out. I have many memories of listening to Dan, including his call of sending the Bengals to the Super Bowl and even back quite some time, as I sat in the car in Gatlinburg, Tennessee with my cousin and listened with great excitement to Cincinnati extend their undefeated streak back in 2015. This is Dan’s 12th season as the Bengals radio voice. He also calls Cincinnati Bearcats games and previously hosted the Cincinnati Reds pregame and post-game shows.

Q: Since joining the Bengals, what has been your favorite game that you have called outside of the Super Bowl run last season?

A: “My favorite game was the playoff victory over the Raiders because it was such a cathartic experience for Bengals fans who have yearned for a playoff victory for so long. The sheer joy in the stadium that night was unforgettable. Outside of the Super Bowl run, my most memorable game was the 13-10 win in Pittsburgh on December 23, 2012. It was an early Christmas present for Cincinnati as the win clinched a playoff berth for the Bengals and eliminated the rival Steelers from the postseason.  It remains the most physical game I have ever seen and ended in thrilling fashion on a game-winning field goal by Josh Brown in the final seconds.”

Q: What is it like working with Dave Lapham on a day-to-day basis?

A: “Working with Lap is a joy. We have adjacent cubicles at Paycor Stadium and joke that we spend more time with each other during the football season than we do with our wives.  I have the utmost respect for Lap for his knowledge, passion, and work ethic. And he is one of the best storytellers on the planet. Bengals fans are lucky to have been informed and entertained by him for 37 years!”

Q: For the Bengals to be playing playoff football this season, what do you think they need to continue to improve on?

A: “A more consistent running game is the first thing that comes to mind. Joe Mixon is one of the best running backs in the NFL and when he’s having success, it makes it easier for the offensive line to protect Joe Burrow. Hopefully, Mixon’s remarkable performance against Carolina is a sign of things to come in the second half of the season.”

Q: Outside of Paycor Stadium, what is your favorite stadium?

A: “As a broadcaster, it’s hard to top Baltimore. The location and size of the visitor’s radio booth is ideal and makes it easier to see the entire field and call the game.  But from a personal standpoint, it’s always special for me to broadcast a game in Buffalo. I attended many Bills games as a kid and it’s almost unimaginable to be in the radio booth there. How lucky am I? My childhood dreams came true!”

Q: As someone who is the radio voice for the Bengals and Bearcats, if you could call a game with any person, who would you choose?

A: “The late, great Van Miller who was my broadcasting hero growing up near Buffalo, NY. Van was the voice of the Buffalo Bills for more than 40 years and had a huge impact on me because he had a great flair for the dramatic and a tremendous sense of humor. When you listened to Van, it always sounded like he was having a ball regardless of how the Bills were doing. If I had a chance to broadcast a game with him, I would just shut up and listen to the master at work.”

As everyone knows, one of my favorite things to do is dive into the positive and negatives at the end of each game.  The bye week is a great week to dive into the good and the bad of where Cincinnati sits during the 10th week of the NFL season. With the tough schedule that Cincinnati holds to close out the year, it is time for Cincinnati to be consistent and it wouldn’t hurt if the Ravens would fall apart in the upcoming weeks. Especially as the Bengals record currently sits at 6-3 in the AFC North. Cincinnati’s odds to win the Super Bowl are currently at +3000 and if you believe this team will be healthy, it might just be a good idea to place a bet on Cincinnati come January 1st. The odds are favorable to the bettor, based on the Bengals record currently – taking this now means a huge payout when it hits!

Join me in the fun by Pre-Registering for Ohio Sports Betting now for a chance to win a Pre-Game Package.