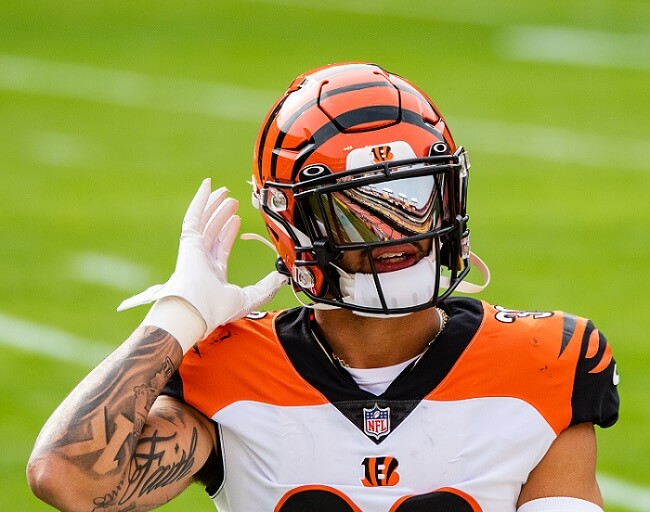 The pre-season has been hectic all around the NFL with injuries, player movement, and endless brawling. Let’s take a moment to look at the hottest topics related to the Bengals over the last week.

Daxson Hill’s incredible rookie preseason performance pushed Jessie Bates to put down the coconut drinks and get into camp. Hill looks like he can handle the position, and everyone knows Bates will be gone in 2023. They could trade Bates before the season or keep him for another run at the Super Bowl this year. He makes the extremely flexible in the secondary.

Tee Higgins Not in NFL Top 100

The NFL Top 100 is fun, and it provides a lot of debate for fans and experts alike. The one head scratcher is Cee Dee Lamb at #57. Look at Lamb’s 2021 regular season numbers compared to Higgins:

Based on those numbers, if you put Lamb at 57 then it’s only right to put Higgins at 56. Further up the list, Joe Burrow was ranked 21st. This is offensive simply because Mahomes is ranked 3rd. Burrow beat Mahomes in two huge games last year, with the latter crumbling in the second half of the AFC title game. Honestly though, it’s better to have players ranked low, just for the chip on the shoulder factor.

The battle rages on for left guard with Volson currently in the lead but struggling in pass-blocking. The blocking issue could be due to poor communication, but he’s still the front-runner. The man of the night for preseason game 2 was linebacker Clay Johnston. He looked strong on special teams against the Cardinals, but Sunday night he was a machine. An astounding 16 solo tackles, 4 assists, and a sack. He will make the roster. He’s the kind of guy that may not show up at the combine but is just simply a football player. These guys are DAWGS!

Word on the street is that he didn’t like the “why not us” motto the Bengals had last season – and most fans agree with him. He isn’t an underdog, and his mindset is refreshing – this is what will push this organization over the top. To be the best, you just have to project it from top to bottom.

Fighting on the Field

A brawl between the Rams and the Bengals broke out during joint practices last week. It got heated and ended the practice for both teams. Videos and images of the melee have gone viral with La’el Collins and Aaron Donald at the center of the fray. Both teams have said publicly that they will handle the matter internally, and the NFL league office will look to stay out of it (thankfully).

Fanduel has Detroit set at +3.5 ATS, and with all the Hard Knocks buzz the Lions will come out firing. Lion fans are likely to hammer this spread because of the hype around the show. Money coming in on the Lions could through week 1 could drop the Lions number as low as +1.5. This game should be tight.

Take Detroit +3.5. If it goes under 3 then hammer the Eagles on the other side.