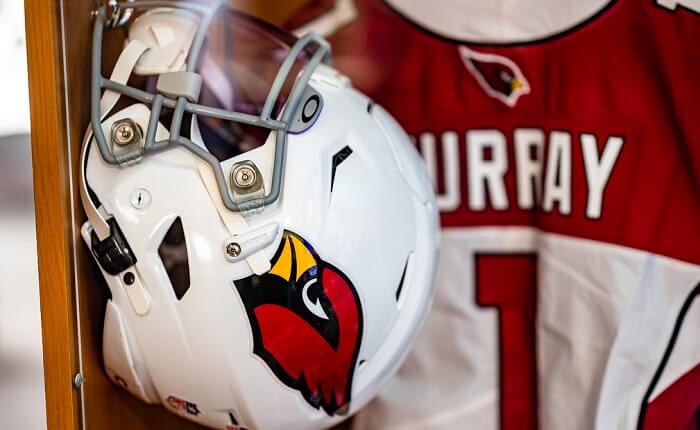 New England enters Monday Night’s matchup looking to put an end to their current 2-game skid. On the other side, Arizona is currently on their own 2-game skid as they’re set to face the Patriots on Monday Night. Keep reading our Week 14 MNF preview to find out what who we’re starting in fantasy and what bets we’re on tonight.

The Patriots are coming off losses to both Buffalo and Minnesota. They desperately need to get back into the win column if they want to keep any postseason hope alive. Their offense took a hit after they announced both wide receiver Jakobi Meyers is out and running back Damien Harris is questionable. Meyers is crucial because he leads the team in receiving yards (593). However, Harris hasn’t been a huge factor in the offense this season, but he has been a decent complement to Stevenson.

Rhamondre Stevenson leads the team in rushing yards with 734 as opposed to Harris’ 383. Mac Jones is coming off a lackluster performance against division rival, the Buffalo Bills. In that game, he threw for just 194 yards in the team’s 24-10 loss. He is going to need to be much better especially without his WR1 Monday night. The Patriots come into Arizona ranked 25th in total yards per game (336.7).

The New England defensive unit has been good this year. They rank 7th in the NFL in yards allowed per game (331.9). The Patriots have allowed just 18.8 points per game, ranking them at 7th in the NFL. New England will need to keep dual threat quarterback Kyler Murray in the pocket and make him beat them with his arm. Murray is a threat regardless of the kind of year he is having and keeping him contained will be the key to victory for the Pats.

The Cardinals are coming off a heartbreaking loss to the Chargers in which they let up the game winning touchdown and 2-point conversion in the final 20 seconds. The Cards’ offense has been about as average as it gets this season as they rank 17th in yards per game (355.4) and 16th in points scored per game (22).

They will face a stingy New England defense and will need a big game out of Kyler Murray. Murray threw for 191 yards and two Touchdowns in his first game back from injury in their loss to the Chargers. He also added 56 yards on the ground. New England’s goal will be to keep Murray in the pocket which will create a lot of opportunity for DeAndre Hopkins and Marquise Brown to have big games. Hopkins leads the team in receiving yards (574) and is tied for the team lead in receptions (49) with Marquise Brown.

Arizona was one stop away from taking down the Chargers in their previous game. Coming off a bye week, the defense should be refreshed and ready to move on as they set to face a banged up New England offense. The Cardinals have allowed 26.8 points per game, good for 31st in the NFL. They are not doing their offense any favors. They have allowed 63 combined points during their 2-game skid that saw the heartbreaking loss against the Chargers and a brutal 38-10 loss to San Francisco. Luckily, they face an offense that is not nearly on the level as Los Angeles nor San Francisco.

They will need to steal some possessions for their offense and Arizona ranks 15th in the NFL in takeaways this year. At 4-8, Arizona’s playoff hopes are all but demolished. After the last games, you can expect this defense to come out with some fire at home on Prime Time.

This game will come down to New England’s ability to keep Kyler Murray inside the pocket. Expect DeAndre Hopkins to have a big night as Murray will be forced to throw the ball quite a bit. Arizona will pull the upset as home underdogs.