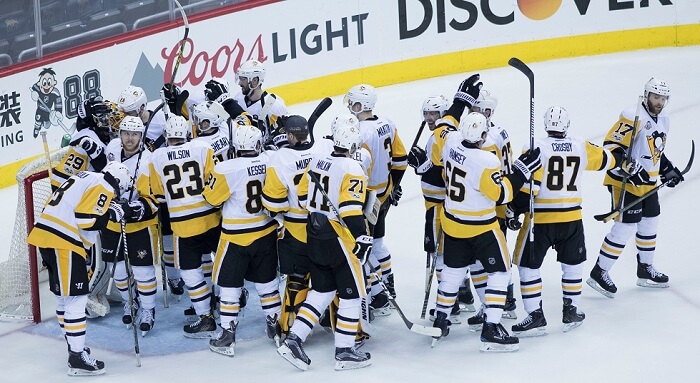 The NHL is giving us a loaded slate for this January Thursday night, and we’ll take it. However, with tons of excellent matchups to bet on, how do you find the best value? That’s where TheUSGambler comes in. Our NHL analyst has broken down his favorite games with the best NHL Thursday picks, and the best odds for betting them.

One of the best rivalries of the past decade and a half is renewed once again tonight. Washington vs. Pittsburgh. Ovechkin vs. Crosby. 17 years later, this rivalry is still as fierce as it was when these two future Hall of Famers were drafted. Pittsburgh occupies the 4th spot and Washington the 5th in Metro Division.

Washington is back home after a 9-day trip to the West Coast where they went 1-2. Their most recent loss came at the hands of the defending champs, the Colorado Avalanche on Tuesday night. Washington was far from full strength in Tuesday night’s tilt. Forwards Nicklas Backstrom and TJ Oshie did not play and Tom Wilson left the game in the second period due to a lower body injury. All 3 of these players are expected to be back in the lineup tonight which will give this Washington team some much needed firepower as they face Sidney Crosby and company. Tuesday night saw Ovechkin score his 31st goal on the year bringing his total to 811 goals and yet another goal closer to Wayne Gretzky’s all-time mark of 894 goals. Washington has play shorthanded much of the year, but Wilson, Oshie and Backstrom being back in the lineup should be the extra pep they need to take down Pittsburgh on home ice.

Pittsburgh is coming off an emotional 7-6 Overtime victory over the Florida Panthers Tuesday night. Tuesday night also marked defenseman Kris Letang’s first game back from injury. Letang returned in a big way for the Pens; ultimately, scoring the overtime winner. The Penguins have played a ton of hockey lately. 4 of their past 5 games have gone into overtime. They have managed to go 3-2 in these games, but all that extra hockey will take a toll on the body eventually. Letang being back in the lineup is a huge plus for this Pittsburgh especially as they enter second half of the season. Pittsburgh will be without starting netminder Tristan Jarry tonight. Jarry is expected to be out with an upper-body injury until after the All-Star break. The Pens will rely on backup Casey DeSmith.

Detroit enters Montreal following an overtime win against San Jose Tuesday night. Dylan Larkin recorded his 400th career point in the win. Larkin leads the Wings with 42 points on the year. The Wings Captain is on pace to eclipse his career high of 73 points barring he stays healthy and consistent. He has been hot as of late tallying 2 goals and 7 assists over the past 10 games. Detroit is not out of the playoff hunt as they sit just 8 points behind the 8th seed Capitals. Detroit ranks 21st in the NHL in both goals scored per game (3.04) and goals allowed per game (3.3). They face a banged-up Montreal team that currently sits in 8th place in the Atlantic Division. These are the types of games that Detroit cannot afford to drop if they are going to make a playoff run in the second half of the season.

Things continue to get worse for the Habs as the season goes on. They are currently 8th place in the Atlantic Division and are the second worst team in the Eastern Conference behind just the Columbus Blue Jackets. They are tied for 29th in the NHL in goals scored per game (2.56). Montreal also struggles defensively as well ranking 28th in goals allowed per game at 3.65. To make matters worse, it was announced this week that forward Cole Caufield will miss the remainder of the season with a shoulder injury. Caufield sits just 2 points behind Captain Nick Suzuki with 36 points for the team lead.  Caufield is a huge loss for this team, but there is no reason to rush back the young superstar with Montreal’s playoff chances being as slim as they are.

Philadelphia enters Minnesota after a hard-fought loss Tuesday night to the Kings on home ice. The Flyers gave the Western Conference powerhouse everything they had before eventually falling in overtime. It has been another frustrating year for the Fly Guys as they are in 7th place in the Metro Division. Their young offense has struggled tremendously this season posting just 2.78 goals per game. Philadelphia lacks continuity being such a young roster. They have shown promise at some points, but at the end of the day they just don’t have the right tools to truly compete in the Eastern Conference right now. Their biggest bright spot is their young goaltender in Carter Hart. Hart has played well this year. He has a 2.97-goals against average and a .908 save percentage. On a team that lacks the firepower to compete, Hart has been a major positive for this team.

Minnesota is riding a 3-game skid ahead of their Thursday night matchup with Philadelphia. They are in 4th place in the Central Division and sit just 1 point behind the third place Avalanche. The differentiator for this Wild team has been their defensive play as well as goaltending. Minnesota is allowing just 2.87 goals per game, good for 11th in the NHL. Goaltender Filip Gustavsson is 11-7-1 with a 2.26-goals against average. Gustavsson has kept this team in many games while they are still in search of more offensive production. They rank 20th in goals per game with 3.09. The Wild have plenty of talent up front. They are led by rising superstar Kirill Kaprizov, who leads Minnesota in goals (27), assists (30) and points (57). With the consistent goaltending the Wild are getting along with the play of Kaprizov, the Wild will be dangerous hockey team.