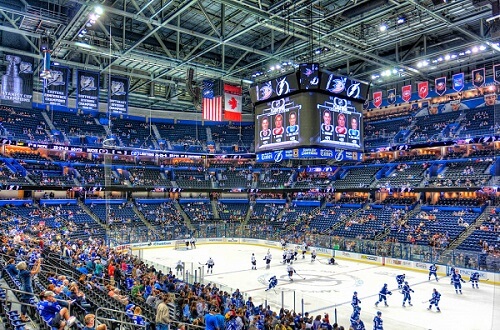 The NHL is back and in full swing as we get deeper into October. We’re already starting to see some of the teams separate themselves from the pack. Tonight’s slate is deep and full of high powered teams that are sure to give us some great entertainment. Let’s dive into our NHL tonight best bets and previews for the game.

The Oilers enter this Wednesday night matchup with a very underwhelming 3-3 record. However, the upside is that they are coming off a convincing win against a solid Pittsburgh Penguins team. Wednesday night is the start of the Oilers’ first road trip of the season. They will look to avenge their 2-0 loss from Saturday night in St. Louis.

Edmonton managed to put up six goals in their last contest with Pittsburgh despite McDavid not registering a single point. However, McDavid is off to a hot start with 5 goals and 5 assists through the team’s first 6 games. Expect him to find his way back onto the scoresheet Wednesday night.

St. Louis enters tonight night fresh off their first loss of 2022 after being shut out by Winnipeg on Monday. This was the first time the Blues have been shutout since March 25, 2021. This St. Louis’ matchup with Edmonton will be their first of 3 games in 4 nights. It will be crucial for them to have a fast start. The Blues’ netminder played extremely well in his Blues debut making 39 saves despite falling to Winnipeg. This is reassuring moving forward if Greiss continues his strong play and Jordan Binnington does what he’s capable of. This St. Louis team will have their work cut out for them as they look to go 2-0 against McDavid and the Oilers early in the season.

This is Edmonton’s first time on the road in 2022. They just played six games at home and went 3-3. They will figure it out, but it won’t be Wednesday night and St. Louis will take this one at home.

The Eastern Conference finalist comes into this matchup sitting at 6th in the Metro in the early going. The Rangers are completing a back-to-back after falling to the defending Stanley Cup Champs last night. The Blue Shirts are currently on a 3-game skid as they get set to face their fellow New York rival.

Artemi Panarin has led the way thus far for the Rangers with four goals and assists, both team highs. Reigning Vezina trophy winner Igor Shesterkin comes into this game with a 3-0-2 record and 2.32 GAA. Backup goaltender Jaroslav Halak has struggled in his first two starts going 0-2 and posting a 4.03 GAA. The battle of New York is always a good one, but it hasn’t been good for the Rangers as of late. They have dropped six of their last eight against the Isles. The Rangers will come out flying for this rivalry matchup as they look to get back on track and grab a crucial 2 points.

The Islanders come into this matchup also riding a 3-game skid where they have been outscored 12-6. The Isles currently sit at the bottom of the Metro division. Anders Lee comes is leading the way with 4 goals and 7 points through the teams’ first 6 games. They will be getting a tired Rangers’ team after going all the way to a shootout with the high-flying Avalanche.

On paper, the Rangers are clearly the better team, but rosters go out the window in rivalry games. Even more so when two teams are fighting for intrastate dominance. Both Islander goaltenders have posted an above 2.50 GAA in the early season and they will need a BIG performance out of Ilya Sorokin if they want to get back on track tonight.

Both of these teams are coming in on a 3-game losing streak. The Rangers just battled the Avalanche all the way to a shootout last night and will be slow out of the gate. This will be a low scoring affair and the Islanders will reap the benefits of not coming off an exhausting game.

Tampa Bay comes into tonight as a heavy favorite in their 2nd out of 3 games on the West Coast. The Bolts fell to the Kings 4-2 in their first of back-to-back games. The 3-time Eastern Conference Champions have gotten off to a rough start this season. They are currently second to last in the Atlantic with a 3-4 record. We’re only seven games into the season, but in today’s league, a fast start is critical. Already teams such as Boston, Florida and Ottawa have all gotten off to fast starts out of the gate.

Captain Steven Stamkos is off to a phenomenal start with 9 points, tied with Kucherov for the team lead. Tampa Bay’s big guns are firing but they just need to put it all together, which they will. They are facing a rebuilding Ducks’ squad and should be able to take care of business.

Anaheim is a not so surprising underdog against Tampa Bay. The Ducks also come into this game second to last in their division. Contrary to the Lightning, they will probably remain here or lower for the entirety of the season. After losing Ducks’ legend Ryan Getzlaf to retirement, Anaheim is in a full rebuild mode once again. This team will be very good in a few years if they can manage to keep their young core together. Troy Terry and Trevor Zegras are rising stars in this league and just need more continuity. Former Denver University standout Troy Terry leads the team with seven points. The Ducks haven’t won a game in two weeks dating back to their October 12th victory against Seattle. Wednesday could be a long night for the youngsters.