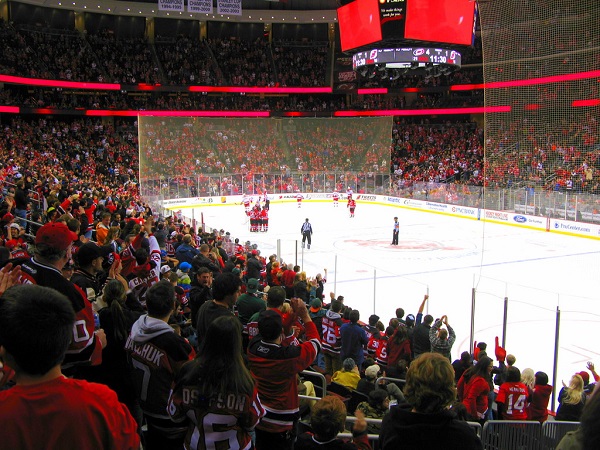 Following the Global Series from the weekend, the full slate of Opening Week NHL games begins this week. Finally!

This offseason was one of the most eventful ones in recent history. Many of the biggest stars in the NHL will be sporting a different color sweater this season. Will this season see a new Eastern Conference Champion? Will Colorado suffer a Stanley Cup hangover or will they continue their dominance? Stay locked into TheUSGambler as I keep you up to date with NHL news around the league. As well as weekly picks and odds my favorite matchups.

Let’s dive into the best matchups for NHL opening day.

This offseason was hectic, but the Columbus Blue Jackets are counting their blessings as they won the Johnny Hockey sweepstakes. No one, and I mean no one, can be happier about this move than Patrik Laine. Laine is coming off a year that saw him light the lamp 26 times in 56 games. Five years removed from his only 40+ goal season, Laine is hoping that Gaudreau is the missing piece to bringing back his lethal scoring touch. Johnny is going to do everything in his power to get Laine back atop the NHL scoring race. Watching these two stars open the season against reigning Metro Division champ, the Carolina Hurricanes is going to be special.

Carolina comes into this season looking to flip the script. They won the Metro division but lost in seven to the New York Rangers in the Eastern Conference Semi Finals. This offseason saw Carolina lose one of their leaders in Vincent Trocheck to the Rangers. The Hurricanes added some veteran depth to their blue line when they acquired former Norris trophy winner Brent Burns. Burns isn’t the player he once was, but the young guys in the locker room must be thrilled. This team possesses some elite talent and speed up front in Sebastian Aho and Andrei Svechnikov. It will be exciting to see how these guys stack up with Gaudreau and Laine in this NHL opening day matchup.

The imploding Chicago Blackhawks get the privilege to open against the defending champs. Sadly, this Blackhawks team run is over. All they have left is Patrick Kane and Jonathan Toews. Don’t be surprised if neither of these guys are still Hawks by the trade deadline. This offseason saw Chicago get rid of yet another superstar and 40 goal scorer, Alex Debrincat. He was acquired by the Ottawa Senators this past summer. The Blackhawks are in a rebuild year and are hoping to at least stay out of the very bottom of the standings. They are going to need the leadership of Kane and Toews more than ever until they part ways. Kane can play with anyone due to his elite skating and playmaking abilities, but one line just won’t be enough. This team is going to struggle and it’s going to start in game 1.

The defending Stanley Cup Champions receive their rings in front of their home crowd Wednesday night. The biggest hit this offseason for the Avs was seeing Nazem Kadri go to Calgary. Kadri was a key piece to Colorado’s Cup run racking up 15 points in 16 games. Fortunately, the Avs have so much depth that they will be able to make up for the loss of Kadri.

2022 Norris trophy winner Cale Makar is poised to eclipse the 100 points mark this season. He will continue to prove that he is already the best defenseman in the NHL. The Avs made it a priority to fix their goaltending issues through the acquisition of Alexandar Georgiev. Like the Oilers, they didn’t pick up a stud goaltender, but they simply improved the position. That’s really the only thing this team struggled with last season.

They’re back this season, returning almost everyone from last year, and now know what it takes to win a Cup.

Nothing like a battle of two Canadian teams on NHL opening day. If you want to talk about a team on the up and up, look no further than the Vancouver Canucks. This team is fast and talented. Vancouver is going to make the playoffs this year.

This matchup against Edmonton is going to be fast paced from the minute the puck drops. One young guy to be particularly excited about is defenseman Quinn Hughes. Hughes is heading into his fourth full season after setting a career high in assists (60) and points (68). He’s going to have his hands full with Connor McDavid’s speed all night. This will be a good early test for the young defenseman and an awesome matchup for fans to watch.

Their opponent will be the team that we projected to represent the Western Conference in the Stanley Cup this season. It’s hard to talk about the Oilers and not mention Connor McDavid. McDavid is coming off his best statistical season and a season that should’ve ended with another Hart Trophy. Nevertheless, the Oilers are hungry after coming up two games short of the Stanley Cup Final last season.

The two best moves this offseason were locking up Evander Kane and goaltender Jack Campbell. Campbell is far from a Vezina Trophy winner, but he’s the best goalie this team has had in years. If the defense can stand strong this year, the Oilers are going to be an absolute juggernaut.