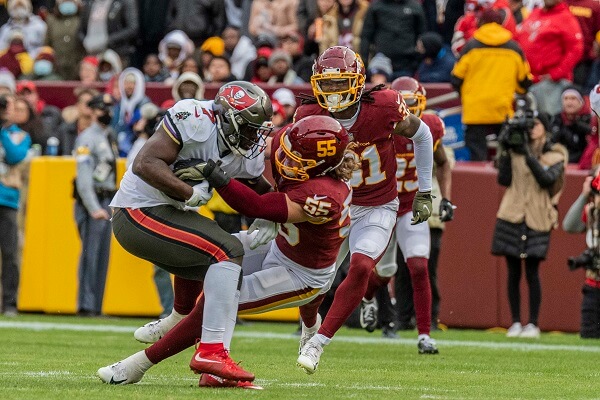 After last week’s Saints at Cardinals game, we can once again say that (good) Thursday Night Football games are back! Week 8 kicks off with the (4-3) Baltimore Ravens traveling to Florida to face the (3-4) Tampa Bay Buccaneers at Raymond James Stadium. The Ravens could very well be undefeated if it weren’t for a few 4th quarter meltdowns. On the other side, the Buccaneers have just been flat-out bad. Let’s dive in and answer some lingering questions before this Week 8 Thursday Night Football game.

Can Tom Brady and Tampa Bay right the ship? Even though Baltimore hasn’t played up to this season’s expectations, it’ll be a tough matchup for the Buccaneers.

Sunday’s game against the Browns almost ended like the rest of the Ravens three losses. Baltimore held a 23-13 lead in the 4th quarter and almost blew it. Justin Tucker hit a field goal to go up by 10 points with just under 12 minutes left. However, Cleveland answered back with a rushing touchdown from Kareem Hunt. Ravens running back Justice Hill then fumbled on the ensuing drive, giving the Browns a chance at a comeback. It seemed as if the comeback was complete when Amari Cooper caught a 34-yard touchdown. However, a flag was thrown because due to pass interference. Cleveland trotted out their field goal unit, but Baltimore blocked the attempt with just under 2 minutes left. Baltimore was able to run most of the clock out after that to finish the game 23-20.

If the Ravens can play four quarters of clean football, they won’t have a problem cleaning up Tampa Bay. The biggest question for tonight’s game is the status of tight end Mark Andrews. He holds a questionable designation after missing practice on Tuesday and Wednesday due to a knee injury. The silver lining is that he was questionable with the same issue for Sunday’s game but suited up and was on the field for almost 90% of the offensive stats.

Through the air, Andrews has been quarterback Lamar Jackson’s #1 target and security blanket. If Andrews is out, the Ravens will have to lean on the ground game from running backs Gus Edwards, Justice Hill, and Kenyan Drake. Tampa Bay is solid against the run, but they’re not the brick wall they once were.

If you’re a Buccaneers fan and sat through the entirety of the game against the Panthers, you should be commended. Most thought that the loss against the Pittsburgh Steelers was rock bottom, but they were wrong. The Tampa Bay team from Sunday was the worst we’ve seen since before Tom Brady joined the team in 2020.

On the first drive of the game, wide receiver Mike Evans dropped a wide-open pass that would have been a touchdown if he held onto it. From there it was all downhill for the Buccaneers. The run game couldn’t get going and Brady just looked out of sync with his wide receivers. This is something that’s been present throughout the season so far.

The first half ended with Tampa trailing 0-7 but the defense was playing well. However, in the 2nd half, the offense’s inability to sustain drives wore them down. Panthers quarterback, PJ Walker was kept in check, but the Buccaneers allowed 173 yards on the ground. When it was all said and done, the Panthers handed the Bucs a shocking 21-3 defeat. Carolina had entered the game as a 13.5-point underdog.

Nothing from the last few weeks has instilled any confidence in Tampa Bay. They’ve lost two weeks straight where they were favored by 11 or more points. They’ve lost four out of their last five games and were bailed out against the Falcons a few weeks ago. To add insult to injury, the Buccaneers will be without their top cornerback Carlton Davis and best defensive playmaker, Antoine Winfield Jr. If Mark Andrews is out, Tampa won’t have to worry as much about the passing game. However, the Ravens do have a good ground attack. Not to mention, Lamar Jackson is one of the most electric quarterbacks in the National Football League.

Brady and the Buccaneers will look better than last week, but not good enough to defeat the Ravens.  Tampa Bay is banged up on defense, and Baltimore will be able to move the ball with relative ease with Lamar at the helm. They will move to 5-3 on Thursday night if Jackson plays it safe and manages the game instead of trying to do too much. Brady will have a fire lit under him and the Buccaneers will put up a fight. I am hitting the over tonight along with the Ravens -1.5.