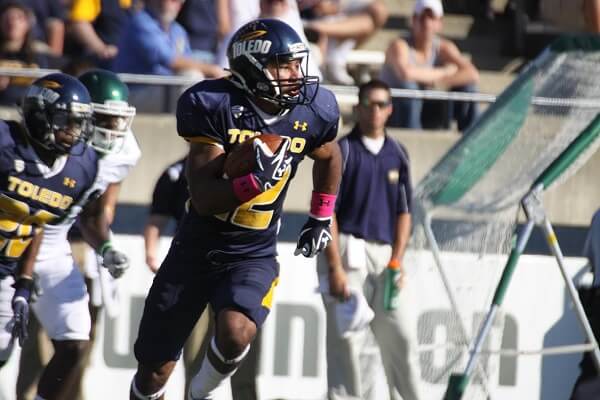 It was a tough week to bet the MAC in week 7, plain and simple. The slam-dunk EMU Eagles got absolutely crushed at home to an inferior team. All the while, Ohio & Western Michigan came nowhere close to their point total, and Central Michigan could not separate themselves from one of the worst teams in the conference in Akron. The MAC Daddy remains undeterred, it’s about how you finish after all, not about how you start. Let’s roll into the best week 8 MAC CFB picks.

This game will be the MAC game of the year to this point, featuring the current leaders from both divisions. The Rockets found themselves in a big hole last week, going down 21 points in the 1Q versus Kent State. However, they ultimately won the game handily by three scores. Toledo has been an impressive MAC side so far this season, with a top-25 scoring offense that can go off at any point during a game. Quarterback Dequan Finn will keep his team in any game, much like he did with a 7-TD performance last week.

Buffalo played lowly UMass in an out-of-conference game last week. They took care of business on the road, covering their 17.5-point spread by a touchdown. After an 0-3 start to the season, Buffalo has been arguably the best team in the Mid-American Conference, winning each of their last 4 games.

Buffalo is one of few teams in the MAC that can hang with Toledo on the offensive side of the football. Both teams are averaging roughly 400 total yards per game. The Bulls have a slightly better defense based on rankings, so expect this game to be closely contested on Saturday.

I like Buffalo in this spot, especially being at home. Toledo hasn’t yet faced a MAC team with the strength of the Bulls. Buffalo could win this game outright at home.

The Eagles were blown out last week at home against Northern Illinois 39-10. It was a disappointing result for a team that was looking to make some noise in the conference this year. EMU turned the ball over twice and weren’t able to get anything going against a statistically inferior Huskie’s defense. They managed to rack up just 226 total yards. Other than an unexpected road blowout of conference rival Western Michigan, there has not been much to be excited about from this Eagles team so far this year. If Eastern Michigan wishes to remain in the conference championship picture, they must win the rest of their games down the stretch, which will be no easy feat.

Ball State has been carried by their defense the past couple of weeks. The 2020 MAC champions have held their opponents to 16 and 21 points respectively in their last two games. They look to keep that momentum going against Eastern Michigan, who has been very hit-or-miss offensively on a weekly basis. If Ball State continues to have success, it will be due to their running game, anchored by Carson Steele. Steele ran for 180 yards and 3 touchdowns last week.

Aside from last week’s abysmal offensive performance, The Eagles of Eastern Michigan are averaging nearly 38 points per game. It’s safe to say that last week’s point total was a bit fluky, given how solid quarterback Taylor Powell has been in past weeks. This week is a good bounce back spot for the Eagles coming off a crushing home loss. You can expect them to provide a solid offensive output. On the other side of the ball, EMU has been giving up a good number of points of their own. Take the Over here.

The Huskies are coming off their best performance of the year by far. They will be looking to keep that momentum going in Athens, Ohio on Saturday. NIU hasn’t seen the Bobcats since 2019, when the Huskies won a 39-36 thriller. The Huskies won in blowout fashion at Eastern Michigan last week. In that game they gained 410 total yards, 287 of which were on the ground. Northern Illinois is posting 32.7 points per game and allowing even more per game (34.3 PPG). When the Huskies come to town, you can certainly expect points to be scored by one or both sides.

The Ohio Bobcats won against Western Michigan last week, bringing their conference record to 2-1 in MAC play. Ohio is similarly built to NIU in the sense that they can put up points but have been allowing opposing teams to score at an equal or greater clip. Kurtis Rourke leads an offense that ranks 45th in the country in PPG (33.1), but the defense is certainly susceptible to give up some big plays of their own. Last week, the defense was able to muster 6 turnovers, which played a key part in their win as underdogs.

If the defense of Ohio can replicate their performance from last game, they will win again as underdogs this week. You can expect the Huskies to try and dominate the running game again on Saturday, which the Bobcats will be game planning for. Three of the last five meetings between these two teams were settled by 3 points, so it would not be a surprise if this game had a back-and-forth feel to it.

Miami (OH) have had their issues moving the ball on offense since losing Brett Gabbert early this year. The offense currently stands at 17th-worst in the FBS in scoring, with 19.7 points per game. Due to this, the RedHawks have only played in one game that has gone over the point total so far this season. Miami is being carried by their defense this year, and they look to have success this week against another bottom-25 offense in Western Michigan.

It has largely been a season to forget for the Broncos of Western Michigan. After being smoked 33-14 by Ohio last week, they sit at 1-2 in the MAC, and don’t show many signs of improvement on either side of the ball. Western Michigan’s passing game has been struggling, ranking 21st-worst in the FBS with 190.4 passing yards per game. They have also turned the ball over 16 times to this point, which is not going to keep a team in many close games. Western Michigan has failed to cover the spread in any of their three games this year in which they were touchdown-or-greater underdogs.

While neither of these teams are wowing anyone with their offensive prowess, I think the total here is set incredibly low. While these teams haven’t been producing to this point, this doesn’t necessarily mean that the trend will continue. Oddsmakers will continue to set the lines lower and lower until these teams go over the total, and I predict that this weekend we will see the breaking point. Western Michigan is allowing over 30 points per game by themselves, so it isn’t asking the Broncos too much to score a couple touchdowns of their own on Saturday. The total has gone under 4 of the last 5 meetings between these teams, but the MAC Daddy sees things going the other way this weekend.