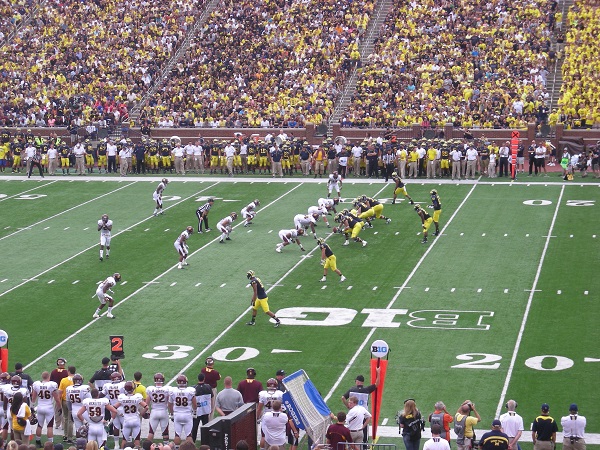 Another 3-1 week for the MAC Daddy in week. No surprise there as every prediction from last week was a slam dunk except for Kent State. That’s the Kent State who started the game in a 17-0-hole vs Miami of Ohio. Much respect to the RedHawks, who are still putting up solid performances while missing their best player at quarterback.

Week 7 is our last full slate of Saturday games before we get into midweek MACtion. Let’s dive into these Week 7 MAC Picks.

Central Michigan remains winless in the MAC after losing 17-16 versus Ball State last week. The Chippewas were stellar on the defensive side of the ball, but a missed PAT ended up being their downfall in a game where they won in most major statistical categories. Their lone win this year is FCS team Bucknell. The Chips face-off against Akron this week, who also shares one lone FCS win this season. Both of these teams have played a really tough non-conference schedule, so it is hard to judge them based purely on their performances so far, but you can be sure that both teams are hungry for their first MAC win.

The difference in this game will most definitely be the defense of the Chips. Akron has allowed 23 sacks through 6 games this year, with 6 of those coming against Bowling Green last week. For a team that relies on their passing offense, it is certainly not a good sign when quarterback DJ Irons doesn’t have the time to get the ball out of his hands.

On the other side of the football, CMU has senior play caller Daniel Richardson, who led the Chips to a 6-2 conference record last year. The team is certainly banking on him to return to form, and his experience should play a big part in this one. Akron’s pass defense currently ranks 123rd in the FBS, conceding over 40 points a game to this point. I expect Central Michigan to return to form in a big way here at InfoCision Stadium in Akron this weekend.

Toledo is looking to build off of their strong 4-2 start at home this weekend as the Golden Flashes come to the Glass Bowl. The Toledo Rockets have won 5 of their last 6 home games. Dequan Finn is completing 60.4 percent of his passes for 1,139 yards, 11 touchdowns and 5 interceptions.

One trend that stands out amongst the others is that Kent has gone 4-10 ATS in their last 14 road contests. Kent currently has all sorts of problems on defense, ranking 113th in total team defense, which is particularly concerning when Toledo boasts a top-30 scoring offense. The Rockets have yet to lose a game at home this year, and I expect that trend to continue. Toledo has the potential to make this a blowout game at home, and I predict an easy double-digit win for the Rockets at home on Saturday. Take this spread all the way up to -9.5 if it gets to that point.

The Huskies of Northern Illinois have not put on a good showing this year, losing their last 5 games. While they haven’t had any issue scoring points, they have been allowing even more, ranking 125th in the FBS in Points Allowed per game. Overs are an impressive 12-2 in NIU’s last 14 games, which explains the high total number this week. Rather than try and hit a high total, let’s look to the Eagles of Eastern Michigan.

The point spread this week is confusing considering how much better of a team Eastern Michigan is. The Eagles are putting up points of their own, posting 30+ in 4 of their last six games. They will be looking to follow up an impressive performance last week when they drubbed the Broncos of Western Michigan by a score of 45-23. Starting quarterback Taylor Powell returned in a big way, throwing for almost 300 yards and 3 touchdowns last week, and I don’t see how he doesn’t do more of the same this upcoming Saturday. As long as they take care of the football, Eastern Michigan should take this one pretty handily.

Ohio has shown plenty of firepower on the offensive side of the football but have been a pretty mediocre team so far this year. It is almost an impressive feat when a team ranks last in the FBS in anything, and that is what we have with the Ohio Bobcats this season, who rank 131st amongst Division I schools in total defense. So far this year, they have allowed 38 points to FAU, 52 points to FCS Fordham, and most recently, 34 points to lowly Akron. They will be trying to tighten up the defense this weekend on the road against Western Michigan, who are having problems of their own.

Western Michigan has the potential to turn their season around against an Ohio team that has lost 7 of their last 9 road games. QB Jack Salopek had a tough time against Eastern Michigan last week, but should not have an issue moving the ball down the field this week. Rather than take a side in this one, the MAC Daddy will be looking at the total this week. This game should be closely contested, and I foresee lots of points being put up in Kalamazoo this weekend. Ohio has a superior passing attack but will most likely give up 30+ points of their own. The total has gone over in 5 of Ohio’s last 6 games, and it has gone over in 6 of Western Michigan’s last 7 games. I do not see this trend regressing to the mean anytime soon.