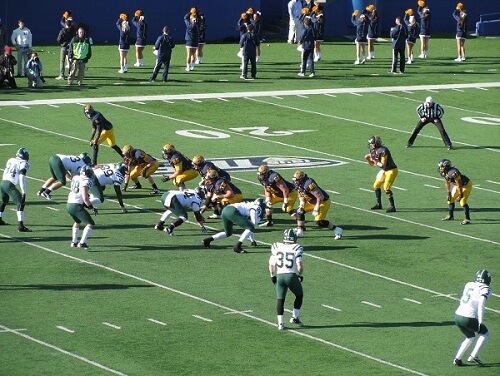 The MAC Daddy is back for Week 6 College Football! Last week’s picks would have been perfect if Bowling Green hadn’t let up in the second half against Akron. Much like the performance of the Buffalo Bulls, we’re on track for a successful betting season after a rocky start. Let’s dive into this Week 6 MAC preview for college football.

Last week, Eastern Michigan needed all four quarters to put away UMass, one of the worst teams in the FBS over the past few seasons. The Eagles did not come close to covering their 20.5-point spread last week. They have now only covered the spread once in their last seven bouts. The Eagles have been without starting quarterback Taylor Powell, who has missed the past couple games with a shoulder injury. He is still questionable again heading into this upcoming weekend. While replacement Austin Smith has stepped up to the task in Powell’s absence, he has not shown enough to convince MAC Daddy that he is a capable starter in this conference, throwing for just 372 yards in his two starts.

Western Michigan has a 2-3 record this season but is 1-0 in a wide-open MAC Conference. Last season, Western Michigan was a 6-point road favorite in this matchup but lost outright by a score of 22-21. They will be looking to get their revenge this weekend in Kalamazoo. A troubling stat is that they have allowed 30+ points defensively in 3 out of their first four games. The defenses only good performance coming against FCS school New Hampshire last week.

If the Eagles get their starting quarterback back on Saturday, they’ll be getting a significant boost to their offensive production. While neither of these teams have been in great form lately, I’ll take the team that’s getting a 5-point cushion. If Taylor Powell is announced as the starter prior to gametime, then watch that line jump towards Eastern Michigan.

The Broncos have only covered one of their last six against Eastern Michigan. Expect this to be another close game this weekend.

While Buffalo had an atrocious start to the year, they appear to have refocused themselves. They have won their first two MAC games after a tough start to their schedule. They are one of three MAC East teams that haven’t lost a conference game yet, alongside Kent State and Bowling Green. A win for the Bulls this week would be a huge step in turning their season around. It would also show everyone else that they can be true contenders in the MAC this season. Two weeks ago, they racked up 500 yards against Eastern Michigan, and scored in each of their first 10 possessions. Expect them to do more of the same this week against the Bowling Green Falcons. Bowling Green ranks bottom five in the FBS in points allowed per game this year (41.6).

Bowling Green has had a tumultuous start to the season to say the least. From 7-overtime thrillers, to winning as 20-point underdogs, there hasn’t been a game this year that’s been boring or slow. Last week, they had a commanding lead against Akron. However, they allowed the Zips to come back in the second half and cover the almost 10-point spread as underdogs. Falcons quarterback Matt McDonald has thrown 13 touchdowns to just one interception this year, which is downright impressive. However, it’s something that probably isn’t sustainable going into in-conference play.

Buffalo were 14-point favorites in this game last season and has covered the spread in 6 of the last 8. While the over is enticing here, there is some insane value in the Buffalo Bulls at anything under 3 points. The MAC Daddy expects the Bulls to make a statement as they pull for the division title.

Toledo has been scoring an average of 33 points-per-game, good for 32nd in Division 1 football. The Huskies of Northern Illinois are right behind them, scoring 31.6 points-per-game. Toledo’s strength is their run game. However, they can throw also, ranking in the top-30 in the FBS in passing yards so far this season. Toledo took care of business at home last week, with a convincing 38-17 win over Central Michigan. The game was 31-3 at half, showing just how dominant the Rockets were in this one.

Northern Illinois jumped to a 24-7 halftime lead last week versus Ball State but ended up losing the game in double overtime by a 44-38 score. The Huskies dropped to a 1-4 record following the loss, losing each of their last four contests. NIU has been led by their offense this season, and the over has hit in each of their 5 games. Rather than take a road team to cover a near-touchdown spread, it’s a safer play to expect points in droves. Nothing we’ve seen from the Huskies this season shows that they’ll be able to contain this dynamic Toledo offense. Northern Illinois has a solid offense that has shown they can be dangerous in small spurts. They should be able to put up some points of their own against the Rockets this weekend.

Kent State is probably the happiest group-of-five team in the country now that they can play in-conference games. Kent has had an incredibly tough schedule so far this year, playing ranked opponents in Washington, Oklahoma, and Georgia already. While they did not win any of these matchups, they did cover the spread in two out of three. They will travel to Oxford this weekend to face the RedHawks of Miami, who boast a 10-game home winning streak.

Miami has alternated between wins and losses this season. However, they are an entirely different team now that starting quarterback Brett Gabbert will miss the rest of the season. While freshman Aveon Smith has been fine in his place, there’s an element of the RedHawk offense that’s now missing. Smith is adept as a runner but lacks the big-play ability with his arm. That ability made Miami a popular pick to win the MAC this year with Gabbert at the helm. The RedHawks have also now failed to put up 21 points in each of their last three games.

Much like last week, MAC Daddy will be fading the team missing its most important player. While Miami has an impressive home streak going, this is not the same RedHawk team as last season. The Golden Flashes are a confident team. They have already had to play in some tough environments so far this year, and they held their own.

The line has already moved from -2.5 to -5.5 in this one. This shows either a lack of confidence in Miami’s ability to move the ball with a freshman quarterback, or a vote of confidence in a solid Kent State football team. Let’s go with the latter.