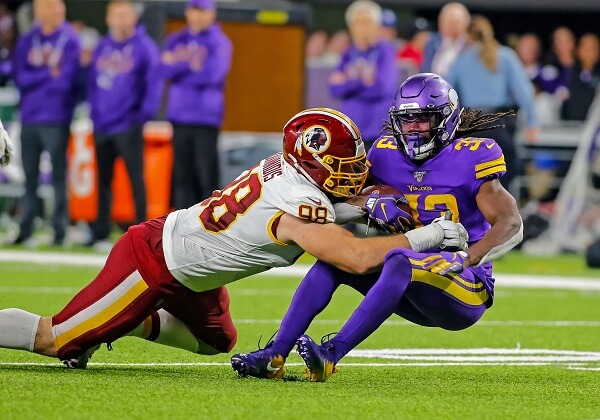 Week 5 is here, and the NFL is as exciting as ever. It’s important to look over projections every week as we get further into the season. Make sure to play around with your fantasy football lineups and connect those with the equivalent player props. Let’s jump into the best Week 5 NFL Player Props.

The main strategy this season has been heavily reliant on watching fantasy football and looking at what player projections are. From there, you can basically let the fantasy platforms do most of the baseline research to help dial in on who to really invest money in.

I’ve got 4 player props that I’m on this week. Also, a plethora of anytime touchdown scorers because those are fun and often give us plus money odds.

The Jags offense has looked good this year, and Etienne has been an excellent compliment to lead back James Robinson. Over the past two weeks, Etienne has seen more playing time, and gotten consistent carries each game. He only got four less carries in week 3 and saw equal running opportunities in week 4. Etienne is the more talented of the two running backs, and we are trending toward a 50/50 split moving forward. Etienne reminds me a lot of Kareem Hunt, and they have similar roles.

Expect Etienne to get about 10 carries this week. He’s averaging 4.2 YPC on the season going against a Houston team giving up 172 YPG on the ground. This all adds up to Etienne getting over this short number. This is a game that the Jags should control, which will mean additional carries for both backs in Jacksonville.

Cook is coming off a nice game against the Saints, where he was able to rack up 86 total yards. This wouldn’t number obviously wouldn’t have gone over but the Saints defense is much more formidable than the Bears. Many critics believe that Cook has fallen off due to low fantasy numbers. However, people forget what a consistent threat this guy is out of the backfield. The Vikings have quietly started the season 3-1, and get a Bears team this week that is mediocre at best. Chicago has given up 5.1 yards per carry to opposing running backs, and allowed two backs to top 100 yards already. Minnesota should roll in this game, which will lend itself to a heavy dose of the run in the second half. Cook is due for a breakout game, and this is the one. He gets to 100 yards this week and he scores a touchdown.

Chubb has been outstanding this year, and he’s been putting up huge rushing numbers every game. That total this week is 92.5 and is less certain against a stout Chargers defense. The way this game could turn into a sneaky shootout makes a play on Chubb’s rushing prop risky. Considering projected game flow, expect him to get targets out of the backfield and get 8 yards from those opportunities.

This number is just simply too low for me not be on it. He’s gone over 7.5 receiving yards in two games this year and gotten at least one pass target in each. If he catches two passes this ticket is going to cash. The Browns are going to have to target him a couple of times out of the backfield. It will probably catch the Chargers off guard because he is not their typical receiving back. Chubb also went over this number seven times last season. He’s shown us he has the receiving history to get us to 8 yards and cash this ticket.

This feels like the type of game that Buffalo is going to win 41-17, or some version of a blowout. Allen has been everything that we expected him to be this year. He is playing terrific football, and he’s going to have a monster game on Sunday. Bills Mafia is going to be in full effect, and the Steelers are going to be punting early and often. This is bound to give this potent Bills offense, and Josh Allen, plenty of opportunities to rack up the stats. The Bills quarterback has gone over 317.5 in 3 of 4 games so far, and Sunday will be no different. The projection here is Allen to have 300 passing yards and 35 rushing yards, easily pushing him over this total. The books haven’t adjusted this number enough, and I’ll lay action and make money on Allen and Buffalo at home.

Romeo Doubs (+200) – The rookie has been getting the attention from Aaron Rodgers this year. That will continue against a Giants secondary that is vulnerable to the big play.

Kareem Hunt (+165) – Hunt failed to score last week, and that won’t happen again. The Browns will probably be playing catchup which should give Hunt some extra snaps.

Brandin Cooks (+160) – He gets a ton of volume, and the Texans should be able to put up a couple of scores this week. Cooks is one of those guys that gets in the endzone.

Isaiah Mackenzie (+240) – I’m starting him in my flex, and the Bills are starting to treat this guy like the #2 receiver. He will get plenty of chances to get in the endzone this week in a blowout win.

Tyreek Hill (+105) – Miami has one of, if not the best, backup quarterbacks’s in the league. Bridgewater will get Hill the pigskin and anything can happen once he has the ball in his hands. Look for him to score early in this game as Bridgewater stretches the field.

Mike Evans (-125) – This is the lock touchdown scorer of the week. Atlanta is weak in the secondary and Evans is the #1 guy. At +500 to score twice, this is worth a little pizza money too.

Dallas Goedert (+220) – Arizona is going to give up a ton of points, and Goedert gets in the end zone as part of a high scoring day for Philly.