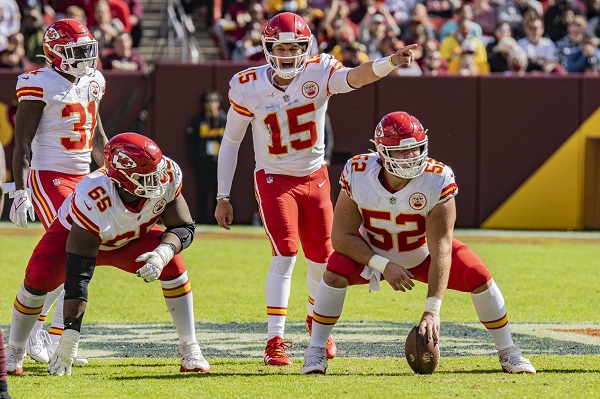 The NFL has been slacking with some of these Primetime games in the early going this season. Having the underachieving Denver Broncos on the Primetime slate 3 weeks thus far has certainly backfired. The one thing the NFL’s gotten right is the divisional matchups on Monday Night Football and this week is no different. We’ve got a heated AFC West matchup between the Las Vegas Raiders and Kansas City Chiefs at Arrowhead Stadium.

The Raiders come into this game as the season’s biggest head scratcher. The aspirations were high for this team after acquiring All-Pro Wide Receiver Davante Adams from the Green Bay Packers. Although they are 1-3, now is not the time to abandon ship and panic. This team is extremely talented and has just had some trouble putting it all together.

A big upside in their Monday Night matchup at Kansas City is the comeback of wide receiver Hunter Renfrow. The speedy receiver from Clemson is going to open the field for Derek Carr and take pressure off Davante Adams. Adams has had two games over 100 yards receiving and two games well under 100 yards. Considering that Renfrow will be back in the lineup, we’re going to see Adams let loose in this crucial matchup. The Chiefs’ run defense has been stingy only allowing 3.3 yards per carry, expect to see Carr airing it out. This bodes well for the Vegas’ receivers. Expect this offense to show you what they’re capable of come Monday Night.

The Raiders’ defense has struggled this season. According to ESPN, they come into this matchup with the 22nd ranked defense. The Raiders’ have just five sacks this season and four of them have come from defensive end Maxx Crosby. Crosby is anticipating the arrival of his first-born child, so his status for Monday Night is uncertain. This would serve as a huge blow to the Raiders’ D line. If they are missing Crosby rushing from the edge, Mahomes is poised to have a Mahomes type of night. Monday Night will be an opportunity for newly acquired defensive end Chandler Jones to step up and wreak havoc for the Chiefs Offensive Line. Chandler Jones signed a 3-year, $52.5 million dollar deal this offseason and the Raiders are still waiting for the return. A huge performance on Monday Night Football would certainly do the trick

The biggest question for the Chiefs ahead of this season was, “How will they fare without Tyreek Hill?” So far, they are averaging 384 yards per game which ranks 5th in the NFL. They are also averaging 32.3 points per game, which is just behind the Detroit Lions. It’s crazy but the Chiefs’ offense is doing just fine. That Kansas City offense just hung 31 points on a very tough Tampa Bay defense after a really uncharacteristic loss against the Colts in week 3. Even the best teams lay an egg every here and there and as we all expected, it was just a flukey win for Indianapolis. Tight End Travis Kelce comes into this game as the team’s leading receiver in terms of yards (322) and receptions (26) and you can fully expect this to continue. Without the wheels of Tyreek Hill, the deep threat isn’t quite as prominent for the Chiefs’ offense this year. Nevertheless, when you have a Tight End as talented as Kelce, it allows you to give the defense much different looks than they’re used to. Mahomes has been able to spread the ball out a bit more to his other receivers in JuJu Smith-Schuster and Marquez Valdes-Scantling. There is a lot to handle with this KC offense and if the Raiders’ pass rush can’t get to Mahomes, it’s going to be a long and painful night at Arrowhead.

The Chiefs’ defense has forced only 4 turnovers this season, but they have scored on every single one of them. Their play has been underwhelming, but they have been opportunistic. They have shown they can get after the Quarterback and take advantage of their opportunities. KC will need to have this on full display Monday Night as this game has all the makings of a shootout and stealing a possession or 2 is going to end up being the difference in the game. It’s hard enough to prepare for a generational talent like Davante Adams, but with the return of Hunter Renfrow, their hands will be full. The key to this game will to smother these two receivers and make Vegas beat them on the ground.

The obvious choice is to always start Davante Adams, but Renfrow is due. First game back in a couple of weeks, Monday night football, division rivalry. Renfrow is going to get a lot of looks and a much softer coverage than he is used to. Adams will get a lot of attention in this matchup which will open the field up for Renfrow to have a big night. Start Renfrow in your FLEX.

With the uncertainty upfront for Vegas, running back Clyde Edwards-Helaire will get a ton of looks both in the run game as well as the passing game. Expect him to eclipse over 100 yards total in this marquee matchup. Vegas has to be praying that Crosby’s child waits a few days longer because they will be hurting up front. All signs lead to a big night Helaire in your RB2 spot.

There’s nothing more motivating to a good team than being written off, especially early in the season. Before the season, we all thought the AFC West was going to be the best division in football. While it is still early, that is not looking like the case. The Raiders are much better than their record shows. They are going to prove that Monday night when they take down their heated rivals on the road. This game will be a shootout and Las Vegas is going to prevail and get their season right back on track moving forward.