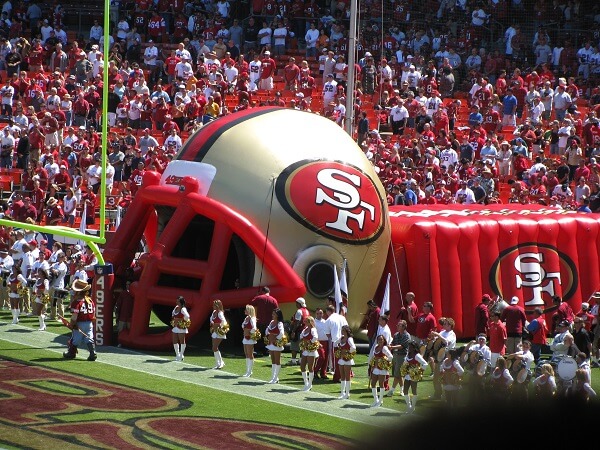 Week 4’s Monday Night Football matchup is a rematch of the 2021 NFC Championship game. It’s the game that saw the Rams just inch past the 49ers en route to their Super Bowl victory. Los Angeles is coming in on a 2-game win streak after getting blown out on opening night against Buffalo. The Niners on the other hand are coming off an abysmal 11-10 loss to the Broncos. Let’s dive into Week 4 Monday Night Football picks and odds.

The Niners are coming off one of the worst performances of this early NFL season. They suffered an 11-10 defeat to Russel Wilson and the Broncos. Not the type of game you want to come off before playing your bitter rival.

Quarterback Jimmy Garoppolo will be without his All-Pro tackle Trent Williams, who injured his ankle in week 3. This does not bode well for the 49ers offensive line as they face future Hall of Famer Aaron Donald. Jimmy G has an opportunity to earn a big pay day after this season now that he’s reclaimed the starting role with an injury to Lance. Garoppolo has been average through the two games he’s played this season, throwing for 154 yards and 211 yards respectively. The good news is tight end George Kittle made his season debut in week 3. Look for him to get more involved in the offense in this matchup if the Niners want to keep up.

The San Francisco defense was the backbone of this team last season, and the first three weeks of 2022. They’ve given up 19, 7 and 11 points respectively this season. This defense will be the reason San Francisco walks out of their Monday Night matchup with a victory. Jimmy G is not going to steal them a win against Los Angeles. The Niners’ secondary will have their hands full trying to contain Cooper Kupp. Kupp is coming off a 4 reception, 44-yard game. He’s going to be looking to have a huge bounce back game against his division rival. This does not favor the 49ers’ defense.

For a 2-1, reigning Super Bowl Champion; the Rams have not been impressive thus far. Week 1 was a hangover game and Buffalo came into that game hungry after the heartbreak they suffered last postseason. Quarterback Matthew Stafford is coming off his second-best season, statistically, after throwing for over 4,800 yards and 41 touchdowns in 2021. Stafford still struggles with interceptions as he has thrown 5 through only 3 weeks. He will need to tighten this up big time against a tough San Francisco defense. Fortunately for Stafford, WR Cooper Kupp is off to another good start. He struggled a bit in week 3 after back-to-back 100 yard games, but I fully expect him to eclipse the century mark again this week.

The big question for the Rams is the run game. Someone needs to step up. Both Cam Akers and Darrell Henderson have rushed for under 130 yards through 3 games. This is a big test for Los Angeles and it’s time for the run game to step up.

It’s no question the Los Angeles defense got torched in week 1. They didn’t play much better in week 2 after allowing 27 points to a mediocre Atlanta Falcons team. Like the run game, it’s time to step and what better game than against your cross-state rival. The Rams’ defensive unit took a MAJOR hit this offseason after losing Von Miller. Miller consequently sacked Stafford twice in week 1. This defense will step up in a big way Monday night. Newcomer LB Bobby Wagner gets his first taste against the Niners and will look to cause havoc for Jimmy G and the Niners offensive line. Los Angeles’ defense is poised to have a big game on the road in this MNF showdown.

Tight end George Kittle should excel in this matchup. Coming into his second game off an injury, Kittle is gearing up for a big game in a huge divisional matchup. Quarterback Jimmy Garoppolo will look to get Kittle involved as much as possible. As always Kittle is your TE1 this week, but expect him to keep you competitive in your week 4 Fantasy matchup.

Los Angeles comes into this game as a road underdog. You should lay the points with the Rams at 1.5 points in this one, but they don’t need it. The Rams will take care of business and move to 3-1. Jimmy G just doesn’t have it and the Rams offense is due for a big explosion. Expect the Rams to win this one by two scores.