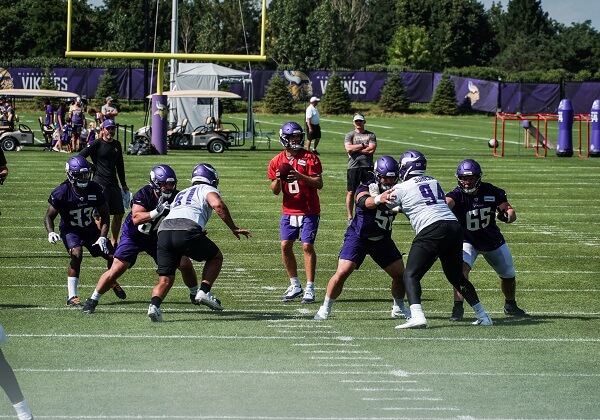 We’ve been waiting all week for Monday Night, and this week we get a double helping. It’s the only time this year that we’ll get two games in this unique Week 2 MNF.

Sit back, relax, and check out these full game previews and picks.

If there’s one team no one wants to face after week 1, it’s the Buffalo Bills. Buffalo put a 31-10 beatdown on the defending champion Los Angeles Rams in the opener. Tennessee lost a heartbreaker in week 1, 21-20, to the New York Giants.

There is no question that Tennessee’s offense took an enormous hit this offseason. The 2021 #1 seed in the AFC lost star receiver AJ Brown, as well as 7-time Pro Bowler Julio Jones. Tennessee dealt Brown to Philadelphia for the 18th overall pick, where they took Arkansas wide receiver Treylon Burks. Philadelphia is ecstatic for this steal. Burks has a lot of potential but getting rid of a franchise receiver like Brown at age 25 is insane.

However, they didn’t leave Tannehill completely hanging after acquiring WR Robert Woods. The Super Bowl LVI Champ is coming off a torn ACL that saw him play only 9 games last season. Look for Woods to be heavily involved if the Titans are going to stand a chance in this Week 2 MNF showdown.

If you’re talking about the Titans, then you have to bring up Derrick Henry. The former 2,000-yard rusher is coming off a season where he played just 8 games due to injury. Of course, he was still just over 60 yards away from a 1,000-yard rushing season. Henry has had no issues finding the endzone against the Bills over the course of his career. In four career games against Buffalo, Henry has 334 yards and 6 touchdowns. Tennessee is going to need some Henry magic if they’re going to penetrate a stout Buffalo defense.

Buffalo proved in week 1 why they’re the early season favorite to hoist the Lombardi Trophy in 2022. The Bills offense torched Los Angeles in Los Angeles. Quarterback Josh Allen may be without receiver Gabe Davis, who is questionable with a sprained ankle. Davis is a big loss in the passing game, but with the combo of Allen-Diggs connection, Buffalo will be fine. The duo connected for 8 receptions, 122 yards, and a touchdown in their week 1 victory. Expect to see more of the same against the Tennessee defense. Josh Allen for MVP is off to a good start and expect him to continue on this path in week 2.

The Buffalo defense came to play in week 1 only allowing 10 points to a very talented Rams offense. Arguably the best defense last season, the Bills went out and inked future Hall of Famer Von Miler to a deal. Miller was good for 2 sacks against his former team in week 1. This defense is scary and they came into this season firing. As long as they just contain Derrick Henry, they won’t allow more than 14 points.

This is a big test for running back Derrick Henry. After missing half of last season, Henry is looking to remind the league who the top dog is. While Tennessee won’t score a lot of points, Henry will get his yards. Henry is an obvious RB1 every week but expect him to show out in this primetime matchup.

Tennessee doesn’t have a Jalen Ramsey in the secondary like Los Angeles last week. QB Josh Allen is going to pick them apart. Allen is coming off a 3 touchdown, 2 interception performance against a tough Rams’ defense. Tennessee’s defense is not nearly as strong. Josh Allen will have a huge performance for Week 2 Monday Night Football.

Tennessee has won the past two matchups against Buffalo. This streak will end in week 2. Buffalo is on another level this year already and they will continue this against Tennessee. While Buffalo will win, I also like Tennessee +10 in this one. The Titans are going to look to kill a lot of clock by just feeding Henry. This will keep the score closer than the game will actually be.

If your plans are anything besides watching the Week 2 MNF night showdown between Minnesota and Philadelphia, then you’re wrong. This will be matchup 1 of 2. These 2 teams will see each other again in January. Nothing better than an early season matchup between two NFC juggernauts. Anyone that’s been following me for a few months now knows how high I am on both Minnesota and Philadelphia. As a Birds fan, I’m nervous, but confident. As a football fan, I am strapped in and ready for this matchup.

Minnesota is coming off an impressive week 1, 23-7 victory against their archrival, the Green Bay Packers. The most impressive offensive performance in week 1 came from Vikings’ rising star wide receiver Justin Jefferson. Jefferson had 9 receptions for 184 yards and 2 touchdowns in the Vikings’ victory over the Packers. Like most of the league, the Green Bay secondary had no answer for the third-year receiver. Philadelphia’s defense, specifically the secondary, poses a much bigger threat to Jefferson. Cornerback Darius Slay will have his hands full Monday night. If Jefferson has another night like he did in week 1, Minnesota will be rolling to 2-0.

Perhaps the bigger positive for Minnesota is the fact that Philadelphia allowed 180+ rushing yards to the Lions last week. Running back Dalvin Cook is licking his chops for Week 2 MNF and with good reason. Philadelphia needs to clean up their run defense or else the Minnesota offense is going to make them pay.

The Minnesota defense comes into this game riding high after allowing only 7 points to Aaron Rogers and the Packer offense. They must be psyched going into this huge matchup against the Philadelphia offense. Philadelphia will give the Vikings’ defense a much different look due to the mobility of quarterback Jalen Hurts. Rogers doesn’t have the legs that Hurts does and this will be a lot to handle for the Minnesota defense. If defensive coordinator Ed Donatell doesn’t make some adjustments to combat that mobility, they’ll be in for a long night.

Philadelphia came into this season with the highest expectations they’ve had in the last decade. The offense didn’t disappoint in their week 1, 38-35 victory over the Detroit Lions.

The biggest performance for Philadelphia came from newly acquired wide receiver AJ Brown. The former Titan had 10 receptions for 155 yards in his Eagles’ debut. His connection with his best friend and quarterback Jalen Hurts was on full display. The duo will certainly need to duplicate this production Monday night in South Philly. One concerning stat from week 1 is not only the fact that receiver Devonta Smith had 0 receptions, but the ball was never thrown to him. It’s understandable that Brown is getting the lion’s share of targets. However, if Philadelphia wants to beat teams like the Vikings, then Smith need a more active role in the offense. Expect Philadelphia to remedy this and get Smith the ball early and often Monday night.

Arguably the biggest disappointment of week 1 was the highly touted Philadelphia defense allowing 35 points to the Detroit Lions. On top of that, they allowed 181 rushing yards. The bright spot of the afternoon was the pick 6 from the former Giant and newly acquired cornerback James Bradberry. General Manager Howie Roseman made significant additions to this defense in the offseason through both the NFL Draft and free agency. Minnesota comes into Monday with the best receiver in football, the most underrated quarterback, and a healthy Dalvin Cook.

All this adds up to be a recipe for disaster unless the Philadelphia defense makes serious adjustments from week 1. Expect this game to come down to the Justin Jefferson vs Darius Slay matchup. Whoever bests the other on Week 2 MNF will deliver a victory to their respective team.

The obvious answer is to start Justin Jefferson as WR1 every week regardless of the matchup. Philadelphia’s defense is going to be so fixated on stopping Jefferson that their run defense will take a hit, again. Expect Dalvin Cook to have a huge week and should be in your RB1 this week.

Devonta Smith. Coming off the worst game of his career statistically, expect Smith to not only get the ball early and often, but to show up in a big way. Like Jefferson, AJ Brown will be getting most of the the Minnesota defense’s attention. The Vikings secondary will not have the speed or talent to stick with Smith as WR2. Smith will be a great flex option this week.

The Philadelphia Eagles will win this one in a shootout. The Vikings are very good, but this game being in South Philly will make the difference. Home opener. Week 2 Monday Night Football. High expectations. Jalen Reagor returning to Philly only to be booed relentlessly. Lincoln Financial Field is going to be going nuts. The Eagles aren’t losing this game. Minnesota is 5-10 in their last 15 Monday night football games. Expect this streak to continue.