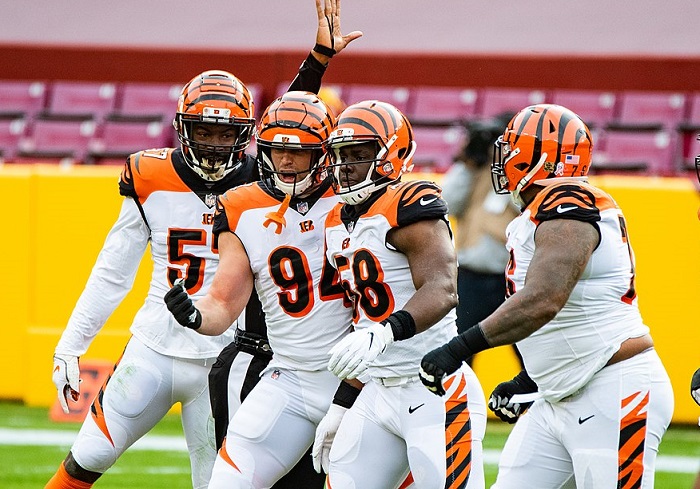 The NFL has finally gifted us with a monumental primetime game between the Bills and the Bengals. Monday night’s matchup carries massive playoff implications for both teams. The #1 seed in the AFC is still up for grabs for both teams, and Monday night could prove to be the ultimate decider. The Bills will clinch the #1 seed if they win out. However, if the Bengals win, then things start to get interesting for week 18. Check out my week 17 MNF picks and full game preview.

Buffalo enters Cincinnati on a 6-game win streak following their loss to Minnesota. The Bills are just two wins away from having the AFC playoffs run through Highmark Stadium. Buffalo has lost in Kansas City the past two postseasons and have an opportunity to ensure that a 3rd such matchup would take place in Buffalo. The star quarterback, Josh Allen, will need to bounce back from a rather uncharacteristic outing against Chicago in the team’s 35-13 victory. In that matchup, Allen threw for just 172 yards and two interceptions.

In that game, the run game was the X factor. Devin Singletary ran for 106 yards while James Cook added another 99 yards. Allen has made it clear he needs to get Wide receiver Stefon Diggs more involved Monday night. Diggs has just 10 catches for 123 yards and no touchdowns in the past 3 games. Diggs currently ranks 4th in receptions (101) and 3rd in receiving yards (1,325). This dynamic Bills’ offense will need to be on full display Monday night.

The Buffalo defense will have their hands full Monday night facing Joe Burrow and company. Buffalo is allowed 213 passings yards per game, good for 15th in the NFL and are set to face the number five passing attack in the league. Buffalo comes into this game having allowed 250 or more passing yards just five times this year. Burrow and company have achieved this feat 9 times this season. The key matchup will be how the Bills’ secondary handles the electric wide receivers of Cincinnati. Tre’Davious White will have his hands full covering Ja’Marr Chase. Buffalo is even on the turnover differential and stealing a couple of possessions for Allen and the offense will be crucial.

The Bengals are hot. They have not lost a game since October 31st against their division rival, the Cleveland Browns. They won a 22-18 nailbiter against New England last week on Christmas Eve. Cincinnati currently sits in 1st place in the AFC North with an 11-4 record, just 1 game ahead of the Ravens. There is still a chance they even get the #1 seed in the AFC with a win in their last 2 games and some help from Kansas City. After starting off the season 0-2, the Bengals caught fire midway through the year and have just been rolling ever since. A lot of the credit has to go towards quarterback Joe Burrow. He is quickly proving that the Super Bowl run was no fluke and he is here to stay. Burrow is 2nd in the NFL for passing yards (4,260 yards), just behind Patrick Mahomes. Burrow also ranks 2nd behind Patrick Mahomes for touchdown passes with 34. Burrow is coming off a stellar game against the Patriots that saw him throw for 375 yards and 3 touchdowns in the teams’ victory. Get used to this Allen vs. Burrow matchup because it is here to stay.

Cincinnati’s pass defense will be put to the test Monday night. They enter this game allowing just over 225 passing yards per game, good for 21st in the NFL. They will need to be much sharper if they are going to walk out with a win against that powerhouse Buffalo offense. The Bengals’ defense is a bit banged up. Defensive end Sam Hubbard was back at practice this week after suffering a calf injury in the week 15 win against Tampa. While his status is still uncertain for Monday night, Bengals’ fans should be optimistic to see him practicing already. Hubbard has 6.5 sacks on the year. Cincy is also happy to have had defensive end Trey Hendrickson return to the lineup last week from his fractured wrist. His level of participation this week has still been limited, but he will be ready to go Monday night. The key matchup for Cincy will be how well they can stick Stefon Diggs. Diggs hasn’t been at his best the past few weeks and the Bengals will need to continue that trend.

Stefon Diggs has been quiet the past few weeks. Unfortunately for the Bengals, this will end Monday night. Expect Diggs to return to his normal self and have himself a huge night. The Bills finally have an opportunity to have the AFC playoffs run through Buffalo and they are not going to miss out this year.