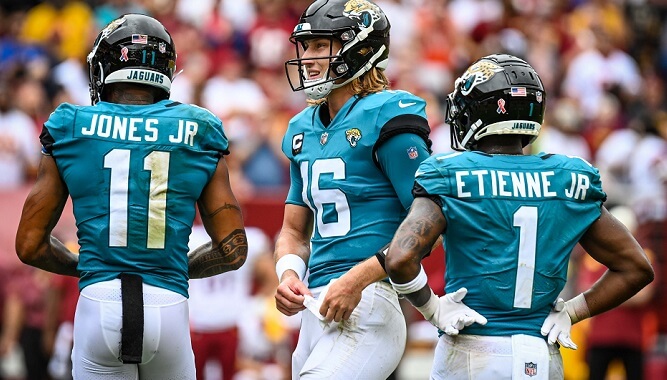 In Week 16, the (6-8) Jacksonville Jaguars visit the (7-7) New York Jets. The Jaguars have looked impressive in their last two wins, and are coming off a week 15 upset of the Cowboys in overtime. New York on the other hand, isn’t looking quite as hot. The Jets lost a close game that came down to the final minutes against the Lions last week and have now lost three straight games. On the bright side, they’ve been competitive in all of those matches. Will New York be able to get back into the win column and spoil the Jaguars win streak? Let’s dive into the Week 16 TNF picks and game preview.

Jacksonville enters this game with a slew of players on their injury report, which will affect them on both sides of the ball. Quarterback Trevor Lawrence has made his way onto the injury report due to a hurt toe, but he is still expected to suit up. The Jaguars have the better momentum going right now and a win would prove just how good they are.

If the Jaguars are going to move the ball, they’ll need to establish the run game first. If there’s an area where the Jets defense is weak, it’s on the ground. New York is one of the top ranked teams against the pass, and the last thing Jacksonville wants is to have Lawrence airing it out. Luckily for the Jags, this plays right into their strengths. They’re ranked 210th in rushing yards per game so you will see a lot of 1st down runs. Running back Travis Etienne Jr. has almost eclipsed the 1,000 yard mark in the season. This week he comes fresh off a 127 total yard game against a top five defense.

Jacksonville has looked great at times and flat-out bad at others, but they’ve won three out of their last four games. Lawrence has taken a huge step in his second year, leading an offense who is ranked 6th in total yards per game and 12th in scoring.

I’ll be the first to admit, the Jets defense really stepped it up against one of the best offenses last week. However, their offense was a different story. Quarterback Zach Wilson is clearly the inferior passer when comparing him to Mike White. Hell, the Jets coaches even tried to play Joe Flacco before giving the ball back to Wilson. Additionally, it’s bad news for the offense that they’re playing a much better defense this week. The good news is that the defense isn’t facing a foe that’s been as high powered as the Lions.

The Zach Wilson issue isn’t a talent issue as Mike White did just fine with the same weapons. They’ve had a few different guys start at the running back position because of injury, but they’ve all had a good success. As of right now, Zonovan Knight is the lead back and he has done a solid job. Through the air, wide receiver Garret Wilson has had a very respectable rookie campaign after a slow initial start. So what’s the deal? Wilson has trouble with turning the ball over, even though he didn’t have too much trouble moving the ball against the Lions. However, that is a low bar as they’re the worst defense in the league, but 317 passing yards is still solid.

The Jets defense will keep them in this game as they’re ranked 4th in points and 3rd in total yards. However, the question remains: will Wilson be able to take care of the ball? Unfortunately, his track record has proven that he will not.

The Jaguars have been playing too consistently for me to bet against them. In the last four weeks they have defeated the Ravens, Titans and Cowboys. They’ve cleaned up the turnovers, penalties, and are still in competition for the AFC South this year. There’s no doubt this will be a close game considering how stingy New York’s defense has been.

From a betting angle, the point total set at 37 is quite low. Even considering the Jets stout defense, we’re going with the over in this one. The other Wicked Wager that I’m on for Thursday Night Football is the Jags moneyline as they will win this one outright.