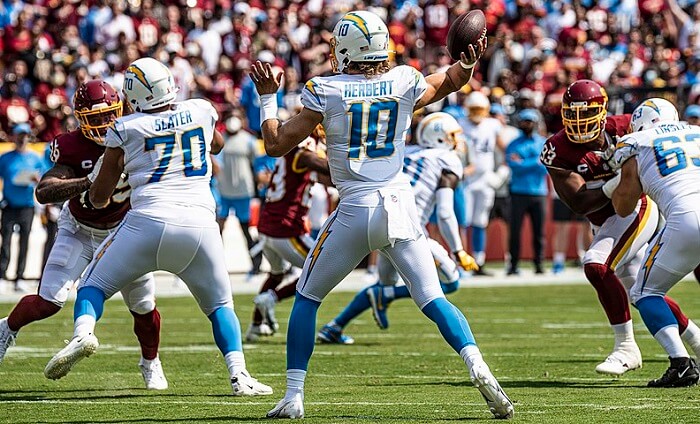 The Chargers enter Indianapolis Monday night on a two-game win streak. Los Angeles has taken down two current playoff teams in Miami and Tennessee over as many weeks. On the other side, it’s been a rough year for the preseason AFC South Division favorites. In a year that seemed promising, they now sit at 4-9-1 completely out of playoff contention. Let’s dive into our Week 16 MNF Picks and game preview.

Over the past two weeks, quarterback Justin Herbert has thrown for over 300 yards to bring his total passing yards up to 4,019 on the season. Herbert is doing everything he can for this team to maintain a wildcard spot as Kansas City has already secured the AFC West title. Herbert was missing his #1 target in Keenan Allen for half the season and has still managed to have a stellar year throwing the ball. He will need some more consistency from his WR2 in Mike Williams as the Chargers try to make a deep run into January.

The Chargers’ defense has struggled against the run all year, allowing 144.6 rushing yards per game. Following Jonathan Taylor getting sidelined for the remainder of the year, they will face a combination of Deon Jackson and Zack Moss. This two headed monster has combined for just over 300 yards on the ground this season. No one should ever be taken lightly in the NFL, but the Chargers’ run defense should be able to get themselves on track Monday night.

Unfortunately, defensive end Joey Bosa has still not been cleared off the IR. However, Chargers’ fans did receive good news on Thursday when it was announced that Safety Derwin James returned to practice. He is trending in the right direction for Monday night which is an enormous lift to this defense. If they can get Bosa back in the coming weeks, watch out for the Chargers.

The Colts are coming in off the worst defeat in NFL history after blowing a 33-0 lead against the Minnesota Vikings. They are also without the 2021 rushing leader, Jonathan Taylor. In this 2022 season, he has struggled to stay healthy after an incredible performance last year.

From a quarterback perspective, Indy has demoted Matt Ryan to the third spot. Now, Enter Nick Foles. The Super Bowl 52 MVP is set to make his first start of the 2022 season Monday night. He has proved time and time again that he can come in late in the year and win ball games. He proved that multiple times during his tenure in Philadelphia. Specifically, when he took the starting job in late December 2017 and helped the Eagles win their first Super Bowl in franchise history. Monday night and for the remainder of the season, Foles and the Colts will look to play spoiler to everyone trying to make the playoffs.

Indianapolis desperately needs to bounce back after conceding a 33-point lead last Saturday against Minnesota. They have also allowed 93 points in their past two games. They desperately need to stop the bleeding on Monday night. Their 10th ranked pass defense will need to be on full display as they face one of the best passers in the NFL. Indy has allowed 205.6 passing yards per game, good for 10th in the league.

However, they have been much worse against the run, allowing just over 123 yards per game. Their hands will be full Monday night with a loaded Chargers’ offense. Chargers’ running back Austin Ekeler has had just one game in which he rushed over 100 yards this season, but he is always a danger to catch the ball out of the backfield. This is something the Colts’ defense will need to prepare for or else it will be a long night in Indianapolis.

The spread for this game is 3.5 in favor of the Chargers and the Chargers will cover this with ease. Even Nick Foles won’t be able to come in and salvage one for the Colts’. The Chargers who are riding high from their past two victories and will continue their success Monday night as they inch closer to clinching a playoff spot.