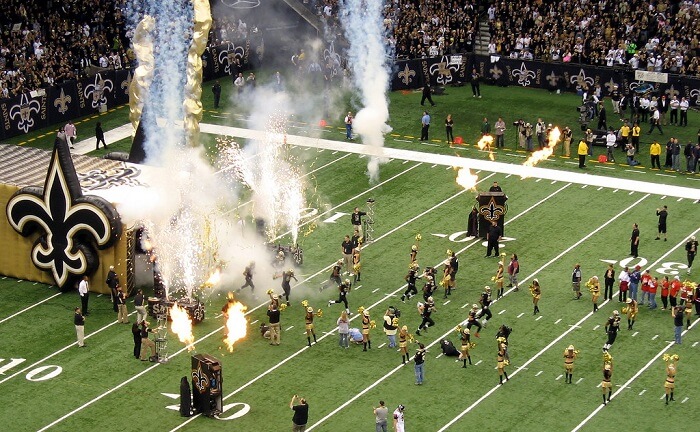 The 5-6 Tampa Bay Buccaneers host the 4-8 New Orleans Saints on Monday night football. It’s crazy to think that these are the first and last place teams in the division, yet they are only separated by one win. Check out our Week 13 MNF preview of this impending toilet bowl and where there is betting value.

The New Orleans Saints will look to avenge their 20-10-week 2 loss in New Orleans to Tom Brady and company. New Orleans’ offense is statistically as average as you can get coming ranked 15th in the league. They stumble into this Monday Night matchup after being shut out at the hands of the 49ers.

The biggest bright spot for this Saints’ offense has been wide receiver Chris Olave’s impressive rookie season. He currently leads all rookies in receptions (56) and receiving yards (822). He also leads the Saints in both receptions and receiving yards. In the absence of starting quarterback Jameis Winston, Olave’s connection with Andy Dalton has been solid. The duo has connected for 701 yards in the 9 games they’ve played together. These two will need to find a way to exploit any holes the 6th ranked Tampa Bay pass defense if they are going to walk out of Tampa with a win.

The New Orleans’ defense should feel good after only allowing 13 points to San Francisco last week. However, the secondary is still not 100% healthy as safety PJ Williams left last week with a knee injury. Additionally, they are still missing cornerback Marshon Lattimore, who hasn’t played in seven straight games. The Saints will rely heavily on their defensive line. Defensive end Cameron Jordan will look to clinch his 8th straight season with 10 tackles for loss. He enters Monday Night with 9. They will need to get after Tom brady early and often if they want to win this game. Brady was sacked just once in the earlier meeting, and the Saints success will ride with their defensive unit.

Tom Brady finds himself in unfamiliar territory and a record below .500. However, somehow they’re in first place still. Why wouldn’t a 5-6 Tom Brady be in first place? Tampa Bay has struggled to score points this year averaging just over 18 points per game, good for 27th in the NFL. However, this offense should never be counted out as they have the weapons to go off any given week.

Even though Brady is currently 4th in the NFL in passing yards (3,051), they have severely struggled to score points especially in the red zone. The Bucs have only scored on 50% of their trips to the red zone, which is good for 25th in the league and they face a stingy New Orleans’ pass defense. They will need to be much better if they’re going to put some separation in the NFC South.

Tampa Bay’s defense had their way against the Saints’ offense in their week 2 matchup. They recorded 6 sacks, 3 interceptions and 2 recovered fumbles in the 20-10 victory. Linebacker Devin White led the efforts with 11 tackles, a sack and a forced fumble. White and company will face a less mobile quarterback Monday night in Andy Dalton. Allowing just over 18 points a game, Tampa’s Bay defensive unit has kept them in games all year. They rank 7th in points allowed per game. The key for Monday Night will be repeating what they did in week 2 and continue to give the offense opportunities.

Brady is not happy being below .500. The Bucs also lost a heartbreaker to Cleveland last week and are in need of a big win. The defense will get after quarterback Andy Dalton all night. Tampa Bay will move to 6-6 after a Monday Night win at Raymond James Stadium.