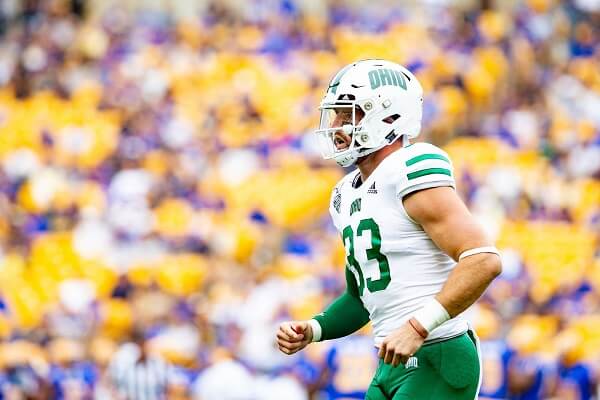 So close to a dominant week! The MAC daddy was foiled by a second-half Buffalo Bulls collapse, who were up 24-3 at the half and lost. Eastern Michigan failed to cover by two points, meaning another .500 week for the most prominent MAC handicapper around. There have been some serious flukes, but there are no excuses to be made! Back to the drawing board with a great slate of mid-week games. Here are the week 12 MAC predictions and picks.

Is Ohio the best team in the MAC this season? At the beginning of the season, there was virtually nobody who thought this. However, the Bobcats have the chance to finish at the top of the Mid-American Conference Eastern Division. They will need to win their next two games and get a loss from Toledo. The Bobcats beat Miami of Ohio last week in impressive fashion winning 37-21 in a game where they were always in the driver’s seat. Ball State almost beat Toledo last week, but were unable to hold on, losing 28-21. Ohio rides a five-game win streak into Ball State in a game where both teams are playing for something.

Ohio’s quarterback Kurtis Rourke has been arguably the best player in the MAC this season. While Ball State is carried by a great running game anchored by Carson Steele, they simply don’t have the balance that Ohio has on offense. That is mostly because of Rourke’s elite quarterback play. Even though Ball State has the motivation to play a competitive game with bowl eligibility on their minds, they will not be able to keep up with the Bobcats, who can break-off 30-yard chunk plays in a moment’s notice. Ball State must also be wary of ball security as Ohio has 13 takeaways in 6 conference games this season.

The Golden Flashes gave us the biggest blowout in the MAC this year when they defeated Bowling Green 40-6. Kent’s explosive offense was on display in its purest form, as their running backs combined for 200 yards. Adding to that total through the air was quarterback Colin Schlee who threw for 214 yards with three touchdowns. Kent kept its bowl hopes alive and will look to keep their momentum as Eastern Michigan comes to town.

The Eagles have been an enigma this season, looking like either the best or the worst team in the MAC on any given week. They showed both of their faces last week, as they got out to a big lead against Akron last week. However, they almost let them come back in the fourth quarter, barley holding onto a 34-28 victory.

The MAC Daddy has been burned too many times this year by this unreliable 2022 Eagles football team. Rather than try to tackle the touchdown-plus spread, let’s look to the total. Point totals set above 60 in college football usually have a motive behind them, and this game is no exception. Eastern Michigan has major holes in their defense. This was made apparent last week when they let Akron back into a game they had no business being in. Kent State is averaging over 30 points per game of their own in their last four contests, which should make for an exciting point-scoring affair between these two teams.

The RedHawks were drubbed 37-21 by in-state rivals, the Ohio Bobcats, last week. Miami showed flashes but were ultimately unable to stop the air raid offense of Ohio. Miami is now 4-6 and must win out if they have any hope to make a bowl game. Northern Illinois won a nailbiter against Western Michigan, winning 24-21 on a last-minute touchdown. The Huskies used a run-heavy game plan, carrying the ball 45 times in last week’s contest.

Miami’s defense has an affinity for stopping the run this season. On average, they’re holding opponents to 116 rush yards per game, making them a top 25-unit in the country in rush defense.

The line here makes no sense. Miami will be preparing to stop the run, and they’ve certainly shown in the past that they can do that. Northern Illinois has not had consistent quarterback play this season. They have relied on a solid run game to keep their offensive motor going. The Redhawks have Brett Gabbert back at quarterback, which has been a saving grace for their offense. He will have plenty of opportunities to showcase why he is a former MAC All-Conference player on Wednesday night. Give me Miami of Ohio in a bounce back spot to win by 10-14 points

The Chips looked down and out going into halftime last week, trailing Buffalo by three scores. Freshman quarterback Bert Emanuel brought them back in the game single-handedly. He rushed for 3 touchdowns and 297 yards in an unbelievable performance as Central Michigan rallied to beat a tough Bulls team 31-27. CMU showed that while they don’t have the most impressive performances this season, they have the capacity to hang in every game. They will be looking to string another win together at home versus Western Michigan. WMU has been one of the bigger underachievers in the MAC this year. The Broncos lost a close home game last week against Northern Illinois, bringing their record to 3-7 on the year.

Both of these teams will rely on the running game on Wednesday. The Broncos have thrown for just 183 passing yards per game this season, ranking 116th in the FBS. On the other side of the field, the Chips have a balanced offensive attack. Though they found a new weapon last week in dual-threat quarterback Bert Emanuel, who appears to be a magician with his legs.

Western Michigan has been an ‘Under’ machine this year, due to their solid defense, as well as their lackluster offense. They just put up 20 points for the first time in a month, and have no momentum going as the regular season is winding down. The MAC Daddy predicts a lot of long, clock-draining drives, which should contribute to a low total at the end of the game.