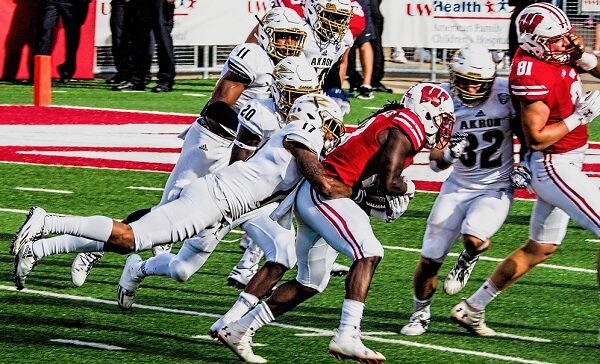 There was never a doubt that Ohio and Buffalo would engage in a shootout last week. Also, that Western Michigan and Bowling Green would engage in the opposite. Last week we knocked the point totals out of the park. However, the MAC continues to remind bettors week in and week out why it is such a tough conference to bet on against the spread. Both Ball State and Central Michigan won outright as significant road underdogs last week, much to the dismay of the MAC Daddy. Midweek MACtion is now in full swing, meaning that there will now be a bigger spotlight on these exciting teams as they get to play in primetime TV windows. Let’s turn the page to the week 11 Maction and MAC Daddy’s best bets.

The Eagles of Eastern Michigan put up a tough fight last week, but ultimately fell to Toledo 27-24. The Eagles were held to just 215 yards of total offense, well under their average this season. Something to note is that unders have gone 4-1 in the Eagles last 5 games. This can be attributed both to the improving defensive unit, as well as the increasing ineptitude of the Eagles’ offense.

Akron lost last week against Miami Ohio, bringing their 2022 season record to 1-8. Akron currently ranks 120th in the FBS in points per game with 18.6. On the defensive side, they rank 126th in the FBS with opponents scoring an average of 37 points per game. To put it simply: this team stinks. Out loud.

This will be the first meeting of these two teams since 2019, where the Eagles won 42-14. Eastern Michigan has a 5-4 record going into week 11, meaning that they can still clinch bowl eligibility before the end of the year. Going into a matchup against a team of this skill level, you can expect the Eagles will be hungry. They’ll be looking to take another step towards a bowl game, which is the end goal for these players.

While the MAC Daddy also likes the under here, he will be taking Eastern Michigan to win by double digits against the Zips. Akron have embraced this newfound tradition of losing, and losing badly at that. Fun stat: The Akron Zips have lost 40 of their last 44 games dating back to the 2018 season.

Ohio puts up points, plain and simple. In their last four games, the Bobcats are posting a ludicrous average of 39.3 points per game. They have also gone 4-0 ATS in this same stretch. They sent a shockwave through the Mid-American Conference last week when they beat up on Buffalo 45-24. Quarterback Kurtis Rourke threw for an impressive five touchdown passes, and the defense kept the Bulls at bay. They did enough to keep themselves in the MAC title conversation with just a few weeks to go.

Miami Ohio is coming off a dominant road win over lowly Akron the week prior, winning by a 27-9 score. The Redhawks need to win two of their final three games to secure bowl eligibility. Brett Gabbert, who has missed a good chunk of the season, should be looking to return to the pass game as he gets back into form.

Ohio play-caller Kurtis Rourke is a walking 300-yard game, he already has five this year in just nine games. Their elite passing attack should be overwhelming to a Miami team that’s still trying to find their offensive identity. Even though they are at home, the RedHawks won’t suddenly have everything click for them all at once. Every time the Bobcats touch the ball, they will be a threat to score, meaning that the RedHawks cannot afford many slip ups on Tuesday.

Ball State had an impressive road win last week, beating a more talented Kent State team. The loss crushed Kent State’s MAC title hopes as the Cardinals won 27-20. Carson Steele ran for 192 yards and had a touchdown to boot, anchoring a balanced Ball State attack that took the final lead with just a few minutes left on the clock.

Toledo did not play last week, but has a one-game lead in the MAC West. They will be looking to put a stranglehold on the West division with a win over the second-place Cardinals on Tuesday.

It is very hard to find a weak spot on this year’s Toledo Rockets team. They are currently the 25th-highest scoring offense in the nation, scoring approximately 36 points per game on average. Toledo has just one loss in-conference this season, losing to Buffalo. Buffalo, in the MAC Daddy’s esteemed opinion is among the best schools in the conference. In their four MAC wins, there is only one game in which they did not win by more than 20 points (vs Eastern Michigan). This Rockets team is tough. While this game is the biggest of the season for Toledo, it is equally important for Ball State. This is a Ball State squad that has looked good in recent weeks and is playing for their own livelihood in the MAC title race.

Ball State isn’t winning here, but they should at least be able to keep the score respectable. John Paddock’s arm is good enough to keep opposing teams at distance. This opens them up for a strong run and play-action game led by sophomore stud Carson Steele. Ball State kept the MAC Daddy humble as a capper, and we are choosing to ride with the Cardinals this time as double-digit dogs. If the MAC has shown us anything this year, it’s that the complete teams are ones who compete.

Buffalo opened as slight underdogs after their disappointing loss in Athens, Ohio in week 10. They scored at the similar clip as they have been all season. However, they couldn’t do anything to stop Kurtis Rourke and the high-powered Bobcats offense as they lost 45-24. The loss snapped their five-game winning streak.

Central Michigan played arguably their best game of the season last week, beating NIU 35-22 on the road. CMU used three quarterbacks but were able to muster enough production to keep the ball moving all game. On the defensive side, the Chips were able to contain one of the most potent rushing offenses in the MAC. They were able to hold the Huskies to just 158 total rushing yards.

This matchup screams “bounce back spot” for the Buffalo Bulls. After last week’s loss, the Bulls are in a three-way tie for the top spot in the MAC East. They will need to win out if they wish to have any chance of winning the conference. Looking ahead, Buffalo has Akron and Kent State after this week and both teams they are capable of beating. They will need to make a statement this week against a Chips team that has been allowing almost 30 points a game to get their momentum going.

The MAC Daddy predicts Cole Snyder to have a big game with his arm, and the Bulls winning by a 10-14 margin on the road. The Chips have won just one game they’ve played as underdogs this season. Don’t expect this trend getting any better for Central Michigan this week.