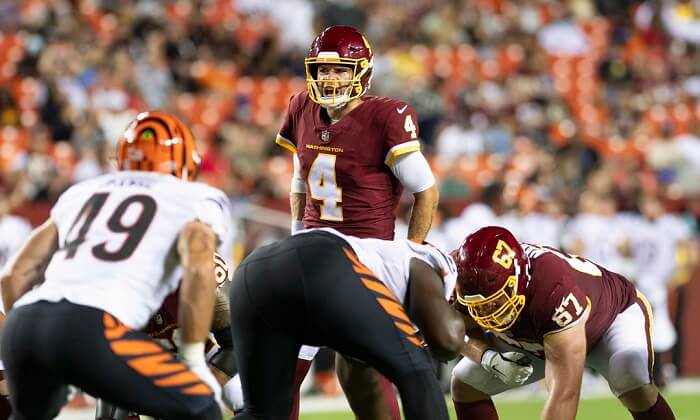 The Birds come into this week 10 Monday football matchup 8-0 and have shown no signs of slowing down. They are coming off a “mini-bye” with their last game being a Thursday night matchup with the Houston Texans. With the World Series buzz over in Philadelphia, the Eagles’ faithful are ready to put their full attention into football. This doesn’t bode well for Washington or anyone coming into Lincoln Financial Field.

Washington is not a terrible football team sitting at 4-5. Unfortunately for them, they are in the best division in the NFC. Who would’ve thought we would be saying that about the NFC East at the season’s midway point. Washington will be coming into Philly without their starting quarterback and former Eagle, Carson Wentz.

Taylor Heinicke will try and pull an enormous upset against the Commanders’ undefeated division rival. Washington had a late 4th quarter lead against the Minnesota Vikings last Sunday but couldn’t seal the deal. Heinicke threw for 149 yards and 2 touchdowns in the 20-17 defeat. However, he faces a much taller task this week going up against arguably the best defense in the NFL. He is going to have to find a way to get wide receiver Terry McLaurin involved early and often. McLaurin could be in for a long night matching up against both Darius Slay and James Bradberry. He will look to be the first wide receiver to figure these two out this season.

The Washington defensive unit has their hands full once again this week going up against a stacked receiving core. This secondary just went up against a tough unit consisting of Justin Jefferson, Adam Thielen and newly acquired T.J. Hockenson. Hockenson and Jefferson had their way with this secondary going for 16 receptions and over 200 yards, with Jefferson adding a touchdown. Monday night will be no different as they face A.J. Brown, Devonta Smith and Dallas Goedert. This group to this point in the season have looked un-guardable. A positive note is that this defense still held the 2nd seed in the NFC to just 20 points which should give them some confidence as they head to Philadelphia.

It’s been quite a month in the city of Philadelphia. The Phillies were two wins away from winning a World Series and the Eagles are 8-0. This will be the first game in Philadelphia since baseball ended which is bad news for the Commanders. Lincoln Financial Field is going to be an absolute madhouse Monday night as Eagles’ fans welcome back their undefeated football team.

The Eagles’ offense enters Monday averaging just under 400 yards per game and this all starts with MVP front runner Jalen Hurts. Hurts has had arguably the biggest leap ever from year 1 as a starter to year 2. He has thrown for 2,042 yards and 12 touchdowns. Hurts has added to these passing numbers with an additional 326 yards and 6 touchdowns on the ground. He has greatly benefitted from the acquisition of his close friend and superstar wide receiver A.J. Brown. Brown currently has 43 receptions for 718 yards. Also, his six touchdown receptions are good for 4th in the NFL. The chemistry between these two is impeccable and they are getting better every week.

Philadelphia’s defense has been incredible this season. They have allowed the 2nd least number of yards this season (1,421). This defense was completely bolstered and restructured this past offseason. General Manager Howie Roseman deserves all the accolades for the moves and draft picks he made. One of his best moves was to acquire free safety CJ Gardner-Johnson, the current leader in interceptions (5). The Eagles’ secondary has quickly become a no-fly zone with the duo of newly acquired James Bradberry and team captain Darius Slay. These two have been impenetrable through the first eight games of the season. They face a solid wide receiver corps in Terry McLaurin and Curtis Samuel on week 10 Monday football. Luckily for them, the defensive line should have their way with Washington and will have Taylor Heinicke making many unwanted throws.

Philadelphia is coming off their bye and then a “mini-bye” since their Thursday night matchup November 3rd. Divisional matchups can always go either way, but this Eagles team is far superior to Washington. The home field advantage in Philadelphia is supreme and will add that extra jolt. This game will be close for a while, but the big guns will eventually take over and the Eagles will remain undefeated heading into their week 11 matchup with Indianapolis.