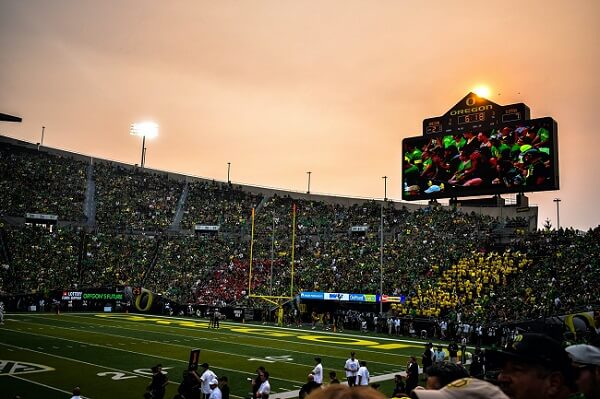 Let’s break down and give our predictions on the three biggest non-conference games for Saturday’s slate. We’ll include betting odds and rank our favorite games from third to first. There’s a lot on the line every week in college football, and Saturday will be no different.

The Pac 12 is back! At least that’s what the preseason AP Top 25 suggests. The conference will have three teams in the top fifteen of the Top 25 to begin the year. Utah is the highest ranked of the three at #7, and they will be tested to begin the year. Florida is coming off a disappointing 6-7 season and have been a shell of what they were in the Tim Tebow glory days. This will still be a great week 1 non-conference college football matchup. Florida will have a terrific opportunity on Saturday to show how they can stack up vs a top ten team.

They are set to face three teams ranked in the top ten of the preseason AP poll this season.

Unlike Florida, Utah’s schedule doesn’t feature much competition, making this game even more critical for the Utes. Vegas doesn’t see Utah as a huge favorite vs the Gators. You can take Utah to cover the 2.5 point spread for -115 odds on Fanduel.

Cameron Rising will be returning as Utah’s quarterback this year. Rising was efficient last year, beating teams through the air and on the ground. Rising has +8000 odds to win the Heisman Trophy this season. He could be a dark horse in this race, especially if Utah overperforms.

Anthony Richardson is set to be Florida’s starting quarterback this season. Richardson starred in a couple Florida wins early in the season last year, running for a few long touchdowns. The dual threat quarterback wasn’t the starter for the team last year, playing behind Emory Jones. Despite his lack of experience, Richardson actually has better Heisman odds than Rising, at +6000.

Each of these guys will need a week one win if they want to be taken seriously in the Heisman race.

Look for Utah to come out firing in this one. Cameron Rising and the Utah offense are going to have something to prove in Gainesville. The Pac 12 will desperately need this win as well. The conference currently doesn’t have much respect in the college football landscape. Going up against a beatable, big brand school in the SEC is the perfect opportunity for Utah to help shift the way the conference is viewed.

There’s a lot of hype behind Anthony Richardson, but he showed inconsistency throwing the football last year. Richardson had a 59.4% completion percentage, to go with six touchdowns and five picks. The Utah defense, led by Van Fillinger, is going to be tough on him.

Expect Utah to be in control in this one. A two-possession victory on the road isn’t too farfetched for the top ranked team in the Pac 12 going up against an average SEC team.

This game is set to feature the defending champs and a west coast powerhouse. As far as non-conference college football matchups in week 1, this one is just barely edged out as the best. Georgia will be looking to continue their reign, while Oregon will be trying to shock the college football world. Following their National Championship season, Georgia lost fifteen guys to the draft. One exciting spot to watch is who will fill the holes on this roster.

Head coach Kirby Smart is focused on making sure his team returns to title contention. He’ll still have his championship winning quarterback in Stetson Bennett. Bennett was solid last year after taking the job full time. He’ll likely need to be even better this year, after the team lost so many of its starters. Tight end Brock Bowers will be a key target of his, this season. He was Georgia’s leading receiver last year, and NFL scouts are already drooling over the 2024 draft prospect.

Nolan Smith is expected to step up in a big way for the Bulldogs defense. Smith will be a huge part of what this team is trying to do in the pass rush. Whoever ends up starting behind center for Oregon on Saturday will have to look out for #4 all afternoon. Robert Beal will also make a lot of noise on this defense. Beal led the title winning team with 6.5 sacks last season, ahead of 2022 first overall pick, Travon Walker. Last year’s Georgia defense led the nation, giving up only 10.2 points per game. This defense won’t live up to the previous one, but they will create problems for the Oregon offense on Saturday.

First year Oregon head coach Dan Lanning will be facing the team he was the defensive coordinator for the last three seasons. Lanning has yet to name a starting quarterback for this matchup. It’s likely already been decided inside his head, he’s just not announcing it yet. Lanning said it gave his team no advantage if he told the media now. The battle for this position is between transfer quarterback Bo Nix and Ty Thompson. Most people seem to think it will be Nix. Nix is a transfer from Auburn, where he was the starting quarterback for three years. Upon his transfer, it was expected that he would be the starter in Eugene for the coming season.

The Ducks will be losing some serious talent on both sides of the ball this year. Defensive end Kayvon Thibodeaux declared for the draft after his junior year and was taken with the fifth pick. Worst of all, the team lost running back Travis Dye in the transfer portal to their rivals down south. Dye will be taking over as USC’s running back this season.

Oregon is still a big-name team, which means they won’t have much of an issue putting a roster together. They’ll be returning star linebacker Noah Sewell to their defense. Sewell is expected to be taken in the first round of the 2023 draft. They’ll also have sophomore running back Byron Cardwell in the backfield this year. Cardwell averaged 6.8 yards on 61 carries last season. He’s proven that he’s a guy that can take on a bigger role. We’ll see what he does with his opportunity on Saturday.

Oregon is going to make this game closer than people think. Fanduel has them as 16.5-point dogs on Saturday, and that number is low compared to Draftkings at +17 (-110). If Bo Nix does end up starting, Oregon will have a guy that has plenty of experience in big games. Oregon is used to surprising people in these situations. Last year, they went into the Horseshoe and took down Ohio State. In 2019, they went up big on Auburn in Dallas, only to blow the lead late.

Georgia’s talent is going to be a little too much for Oregon in this one. They’ll be playing in a packed house in their first game since winning the National Championship. It won’t be a home game for them, but it will feel like one. It will only be an hour and a half drive to the team’s home in Athens. This one will be back and forth for three quarters, but Georgia will be the team that pulls away late.

Expect a shootout in Atlanta on Saturday, but the local guys will get the last laugh.

The biggest matchup of this thrilling week one comes from the Horseshoe, where Ohio State will take on Notre Dame. This one takes home the honors of best non-conference college football matchup for week 1.

The two storied programs haven’t faced each other since the 2016 Fiesta Bowl. Ohio State won this contest 44-28. This Ohio State team will feature an electric offense. CJ Stroud is the Heisman favorite, with +200 odds. His top wideout, Jaxon Smith-Njigba, is another popular bet to take home College Football’s most prestigious award. Smith-Njigba’s odds sit at +5000, making him the top wide receiver in the odds table.

Ohio State running back TreVeyon Henderson isn’t someone opponents are going to want to take lightly either. In his freshman season last year, Henderson had 1,248 yards, averaging 6.8 yards per carry. He was also able to tack on nineteen touchdowns for the year.

Henderson’s Heisman odds put him in a tie for seventh, at +4000.

How will Notre Dame’s defense be able to stop any of these guys? It may be one of those situations where you don’t. You just hope to contain them.

Notre Dame will be led by first year head coach Marcus Freeman. Freeman will have a tough task getting his team ready for their week one matchup in Columbus. He made the decision a recently to turn to Tyler Buchner to be the team’s starting quarterback this season. Buchner didn’t get much action in his freshman season with the Irish last year. He’s a 6’1 dual threat quarterback who will take off if given space.

The good thing for the Irish is they will be returning much of their defensive core. Isaiah Foskey had 10 sacks and 9.5 tackles for loss last year. If Foskey can put pressure on Stroud on Saturday that will be huge for Notre Dame’s hopes to hang around in this one. Foskey might not be around very long when it comes time for draft day in April. A big performance on Saturday will only help his draft stock. Defensive tackle Jayson Ademilola is another guy that can bring pressure. Last year Ademilola had 4 sacks and 8.5 tackles for loss. He’ll be returning for his fifth year on this Irish defense.

This defense will also be getting assistance in the secondary from Northwestern transfer, Brandon Joseph. Joseph had 3 interceptions last year, and 6 in 2020. He begins the year on the Thorpe award watch list, which goes to the best defensive back in the country.

The Ohio State offense vs Notre Dame defense is going to be a great matchup. Both sides will feature a lot of star power in this non conference college football matchup. However, expect the matchup between these two teams to be rather one-sided. Ohio State’s offense is going to put up points, regardless of who’s defending them. It’s hard to picture them suffering the same early season home defeat they did last year vs Oregon.

Notre Dame is a team that has a lot of question marks on their offense. We’re not sure what to expect from Tyler Buchner, and the pieces around him are inexperienced. We are used to seeing Notre Dame let downs (College Football Playoff) when matched up against teams that are more talented than them.

If Notre Dame’s not careful, this one could get out of hand as well.