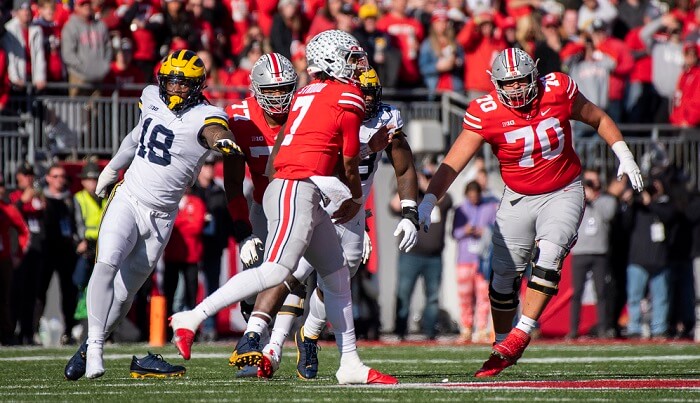 The Heisman Trophy finalists have been decided. However, we must wait for Saturday to determine who will win college football’s most coveted award. The four finalists are USC quarterback Caleb Williams, TCU quarterback Max Duggan, Georgia quarterback Stetson Bennett, and Ohio State quarterback CJ Stroud. The decision to include these four tells you all you need to know when it comes to positions that are valued in the sport. Here are the updated Heisman Trophy odds and best bet ahead of Saturday’s ceremony.

Despite there being four candidates, there is one name that’s miles ahead of the rest of the field.

Caleb Williams has established himself as the clear favorite coming into the Heisman Trophy ceremony this Saturday. Williams did nearly enough to lead his team to the College Football Playoff, but a second loss to Utah did his team in. Even with the late season disappointment, the USC quarterback shined all year. After transferring from Oklahoma, Williams threw for 4,075 yards to go along with 37 TDs and only 4 interceptions.

Known for his passion on the football field as well, Williams gave his all to the team. It was easy to tell how much the game meant to him when he delivered his passionate sideline rants and there’s no doubt that Williams will garner plenty of NFL attention when he becomes eligible following next season.

Caleb Williams consolation for losing the Pac 12 championship will be Tulane in the Cotton Bowl. The game won’t impact Williams’ Heisman chances but it will provide fans with one last show to see before USC turns the page on the 2022-2023 season. You can guarantee Williams will be one of the favorites for the Heisman Trophy coming into next season.

The Rest of the Field

Max Duggan has the second best chance of winning the Heisman Trophy. Another guy known because of his passion for the game. However, unlike Williams, Duggan still has his eyes set on a bigger prize. TCU will be one of the teams competing in the College Football Playoff. The Horned Frogs got in as the 3 seed, despite their loss in the Big 12 title game.

Duggan might be the biggest surprise of the college football season. The quarterback had never played outstanding football coming into this season but a 30 touchdown/4 interception season helped earn him a spot in New York. Following the Heisman Trophy ceremony, Duggan will turn his attention to December 31, when TCU takes on Michigan for a spot in the National Championship game.

Stetson Bennett is another guy that will be headed to New York. Bennett was tasked with leading a team to back to back National Championships after the team lost much of their defense to the draft. Georgia ended up being one of two unbeatens in college football this season and locked up the one seed heading into the playoff.

Instead of being just a part of the supporting cast, Bennett was the leader of this team. The Georgia quarterback didn’t light up the stat sheet quite like other guys heading to New York, but he did have an efficient year. He threw for 20 touchdowns and 6 interceptions along with running for another seven scores. Bennett likely won’t hear his name called on Saturday, but the quarterback sure has delivered during his time in college football.

Ohio State quarterback CJ Stroud has the worst odds among finalists to win the Heisman Trophy. Stroud was a favorite coming into the season along with Alabama quarterback Bryce Young. He’s put up fantastic numbers but has also looked sloppy at times. His two interceptions against Michigan may have cost his team their lone loss of the season. Oddly enough he is a Heisman Trophy finalist that has underperformed this year.

Stroud has still done enough to earn his team a spot in the playoff. Ohio State will be taking on Georgia on December 31st, a game where Ohio State will desperately need Stroud to come through.

To start you off with a lesson on the Heisman Trophy, when heading into ceremony weekend the only person worth betting on is the favorite. The voting is done by 870 media members. Media drives hype and 870 is a lot, meaning we are likely to get a result that aligns with what is expected. In recent memory, the betting favorite has always won when we get to this stage.

In this case, the favorite is Caleb Williams. You’ll have to go beyond completely emptying the pockets if you want to get something in return that’s worth celebrating, but it’s easy money nonetheless. Williams has had a great season, leading USC to a near spot in the college football playoff. It’s been an underwhelming Heisman season, but Williams is an exciting young talent. The quarterback will be a top draft prospect in the near future, but before then he’ll be trying to reimagine the glory days of USC football.