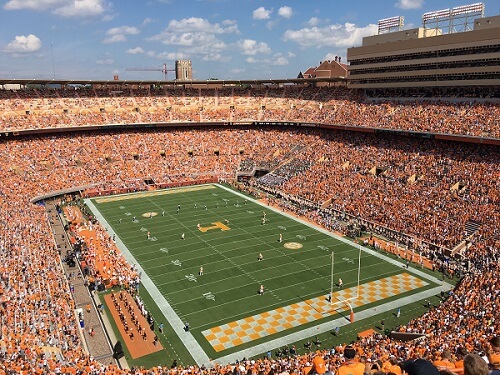 Welcome to Twelve in the Box. Here, you will see twelve teams making the biggest impact on college football. Is this a CFB ranking? Not really—you won’t find any numbers by the team names. Is this a CFB power ranking?  Sort of, kind of. The Judge, here, will use his arbitrary sliding scale of indiscriminate factors to present the twelve college football teams (and three alternates) Your Honor thinks you need to be paying attention to.

In a week that could probably be more concisely described in emojis than written word, college football fans were left confused as Week 2 brought nothing but chaos. Is there actual parody in this sport? We learned that our CFB Week 1 overreactions may have been unjustified, so now let’s overreact about CFB Week 2.

Twelve in the Box Odds Powered by Fanduel.

Who else could win on the road in Texas and drop in the polls? While the Crimson Tide did not perform to their standard, they ate haymakers from the Longhorns and came out victorious. Did the Tide not play up to their standard, or is the standard too high for this team? The Judge believes it is the former.

The talent and potential of this team was evident on the field. However, Alabama does not have the speed and game-breaking ability at the receiver position like they have had in years past.

Next Game: vs. UL Monroe

This is the second week in a row the Mountaineers have been on the mind of college football fans. After losing a shootout against North Carolina, App State rebounded with a road win against Texas A&M. The Judge takes notice that this win did not have the same gravity as the win at Michigan in 2007. Why? We have come to expect this of App State. Also, there wasn’t a wild blocked field goal at the end to spam on Sportscenter.

Appalachian State will be in headlines for a third week straight as College Gameday is visiting Boone on Saturday.

Next Game: vs. Troy

Don’t look now but there is something brewing in Provo. The Cougars took down a top-10 Baylor team and will travel to play Oregon this week. If BYU wins on the road in Week 3, they’ll be looking at a very manageable rest of the schedule. The only remaining ranked opponent they will face is Arkansas, who BYU will get at home.

The Cougars should pause on popping any champagne too early. However, they have a legitimate opportunity to run the table and submit an undeniable resume to the playoff committee.

Next Game: at Oregon

Trying to take too much away from this game is a fool’s errand. No, Georgia did not look as crisp against Samford as they did against Oregon. Still, the Dawgs defense pitched a shutout, keeping the season tally of points allowed at 3.

Georgia likely won’t be tested until late October against Florida. I use “tested” liberally. Until then, Kirby Smart will need to use every trick to keep his team focused and improving.

Next Game: at South Carolina

Kentucky is not just a basketball school. Few teams have been as consistent in the top half of the SEC East as Kentucky has been lately. For a school who recently failed to beat Florida for four decades, an unsurprising win against the Gators in the Swamp firmly illustrates how far Mark Stoops has brought this program. The cherry on top this week was that Stoops passed Paul “Bear” Bryant as the winningest coach in Wildcat history. How about that for good company?

Next Game: vs. Youngstown State

Like Georgia, Michigan will not face a true challenge until October. Dissimilar to Georgia, we don’t have a sense of how great this Michigan team can be. Can the Wolverines make it to then without slipping up.

Jim Harbaugh seems to have harnessed the momentum from 2021 while still not playing all his cards. What cards does he have, though? We will be forced to wait to find out.

Next Game: vs. UConn

Scott Frost has officially been relieved of his head coaching duties for the Nebraska Cornhuskers after a 45-42 loss to Georgia Southern. Frost was in his fifth season as head coach with a record of 16-31. The firing was not surprising. What did raise an eyebrow was that Nebraska didn’t wait until October, when Frost’s buyout would’ve been reduced by half.  Maybe it was to try to salvage the season. Maybe it was to be first in line on the coaching carousel. Maybe it was a sign of goodwill toward a former Cornhusker star.

As the storm around Frost ends, so likely does Nebraska’s time on Twelve in the Box.

Next Game: vs Oklahoma

Notre Dame followed an admirable performance at Ohio State with a disgraceful showing in Week 2 against Marshall. The hope for a special season has evaporated in South Bend and Marcus Freeman has yet to win a game as head coach.

Next Game: vs. Cal

Ohio State’s biggest challenge right now is the training room. If the Buckeyes can get fully healthy, they can be a true contender to win it all. The offense took a step in the right direction against Arkansas State and will keep improving as players return. The Buckeyes will get one more chance to shore it up before starting conference play against Wisconsin. However, they cannot overlook Toledo and quarterback Dequan Finn, who could cause some angst in Columbus.

Next Game: vs. Toledo

This is just a fun team to watch. Tennessee pulled out a road win in overtime against Pittsburgh is Week 2. While the defense may not be on par with what Tennessee fans would like, the offense makes up for it. The Vols are a threat to score at any moment if they have the ball.

They will have another tune-up in Week 3 before getting to host Florida. Go ahead and mark your calendar for that one.

Next Game: vs. Akron

Is Texas back? That is the question everyone is asking after almost knocking off #1 Alabama. The question Longhorn fans need to be asking is “When will Quinn Ewers be back?” Ewers led Texas to two scoring drives before being knocked out with a shoulder injury.

The takeaways from the loss were positive, as the Longhorns have a franchise quarterback and a salty defense to boot. Texas will need to put the game behind them as a solid UTSA team will not be looking to lie down in Week 3.

Next Game: vs. UTSA

Lincoln Riley’s offense was cooking against Stanford in Week 2. Caleb Williams threw for 341 yards and four touchdowns to put the game out of reach early. The Trojans would rather you not ask them about their defense. The unit relied on turnovers to keep points off the board but gave up 441 yards of total offense. Unfortunately, that is what will keep this USC team from truly contending for a national championship.

The good news for Lincoln Riley is he can transfer in a brand-new defense next year.

Next Game: vs. Fresno State