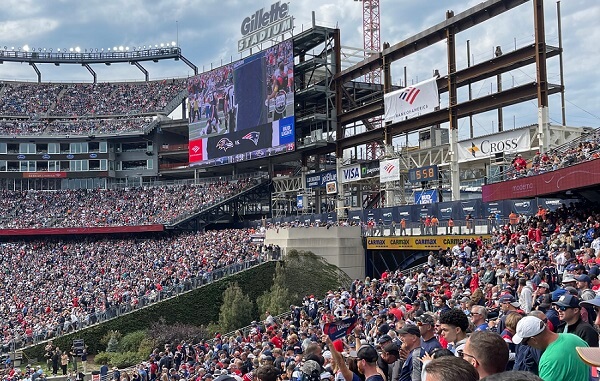 On Thanksgiving Eve, the 8-2 Minnesota Vikings will host the 6-4 New England Patriots in a highly anticipated matchup. The Vikings are coming off a brutal 40-3 defeat at the hands of the Dallas Cowboys. On the other side, the Patriots are riding high after a thrilling win over the New York Jets. This will be the Patriots first appearance on Thanksgiving since the famous butt fumble game in 2012. Let’s take a deeper dive into the Patriots at Vikings preview and an exciting turkey day matchup.

Patriots at Vikings Preview and Notes

Whatever could have gone wrong for the Vikings did in their 40-3 defeat at the hand of the Dallas Cowboys. The Minnesota offensive line was no match for the vaunted Dallas front, recording an absurd 7 sacks. Unfortunately for them, it won’t get much easier on Thanksgiving when they face the NFL sack leader Matthew Judon and company.

The aforementioned matchup is the one to watch this week as the New England secondary will have their hands full with Justin Jefferson. However, if Judon and the front seven can get to Kirk early, then it could throw off his game once again.

The game went exactly as expected. A defensive battle where neither quarterback was asked to do much. Mac Jones was efficient, going 23/27 for 246, and most importantly, he did not turn the ball over. The Patriots came away with the victory on a punt return touchdown by Marcus Jones on one of the game’s final plays. It wasn’t pretty, but a win is a win.

Fun fact: this was the first punt return for a touchdown so far this season. The league has more or less eradicated them in recent years with better punting and coverage techniques.

The game on Sunday will be televised nationally on NBC, with kickoff set for 8:20 pm ET. Mike Tirico, Cris Collinsworth, and sideline reporter Melissa Stark will be on the call. You can listen to the game locally on 98.5, The Sports Hub in Boston.

Patriots Defense: The Patriots defense is licking their chops after seeing what Dallas’s front did to the Minnesota offensive line. With a short week, this matchup against the Vikings seems even more appealing. Give them the start in your league.

Rhamonde Stevenson: Although he didn’t set the world on fire against the Jets, Stevenson is still a must-start against the Vikings on Thursday night. If the Patriots are going to win, it will be because they use their two-headed monster out of the backfield. Again, expect a high volume of touches for the second-year running back out of Oklahoma.

Kirk Cousins: A short week against a tough Bill Belichick-led defense is not a great matchup for Cousins. This fact, combined with Kirk Cousins’s dreadful record in primetime games, leads me to find other options for my fantasy team.

Adam Thielen: With the addition of tight end T.J. Hockenson, we should continue to see Thielen lose out on some targets. If you add in the tough matchup against the New England secondary, it leads me to find other options for week 12.

I like this matchup for New England. They should be able to rush the passer on defense and run the ball on offense. Those are the two ingredients the Patriots need to win, and they will do just that on Thursday. From a betting perspective, the point total is set just right for where this game could end. However, given New England’s recent defensive triumphs, it’s more likely it ends under.

The best value in this game is the moneyline because the Patriots can win this one on the road. Additionally, you’ll get the odds at plus money to add a little juice to your bet.