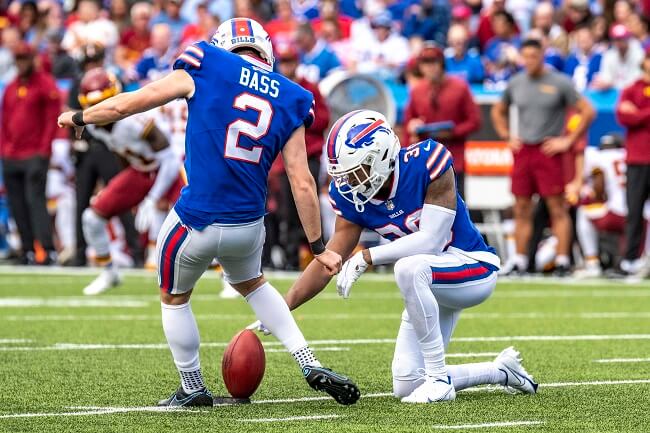 The first NFL football game of 2022 is finally upon us and we’re in for a treat. The defending Superbowl champion takes on this year’s Superbowl favorite (+600).

The season starts with the defending Superbowl Champions hosting the Buffalo Bills at SoFi Stadium. In a surprise to some, the Rams are the slight underdogs at home. It’s sure to be a close, competitive game for all 4 quarters.

The roster on the field for the Rams is nearly the same as when they won the Superbowl. The most notable departures being receiver Odell Beckham Jr and linebacker Von Miller. The latter will now face them tonight from across the line of scrimmage. The Rams signed Allen Robinson in the offseason, which will fill the shoes of OBJ.

Aaron Donald anchors their defense, so Josh Allen will be under duress for the better part of the evening. Behind him, linebacker Bobby Wagner, who they added via free agency improves their defense in the middle of the field. Josh Allen is known to make plays with his feet so the linebackers will need to be stout tonight.

The Bills lost to the Chiefs in heartbreaking fashion last postseason and come into 2022 with a chip on their shoulder. The Bills got better during the offseason via the free agent market, focusing on the defensive side of the ball. The front office went out and signed Von Miller to fill their biggest hole in an already solid defensive unit.

On the offensive side, they didn’t change much and quite frankly, didn’t need to. Josh Allen will get better with experience, and he will be in MVP talks throughout the year. BetRivers has the Bills as the SuperBowl favorites (+600). There’s no doubt, they’ll be at the top of the AFC along with the Kansas City Chiefs and Cincinnati Bengals.

What would a Rams Bills Game Preview be without fantasy football info. Both teams will have players to watch for in Fantasy Football. Kupp is probably the most notable for the Rams, after having an historic season in 2021. Kupp has been going in the first-round of 2022 fantasy drafts regularly and his expectations tonight will be high. Other notable players for the Rams include RB Cam Akers, WR Allen Robinson, and K Matt Gay.

On the Bills side of the ball, you’ll want to look out for Stefon Diggs. Diggs was the 7th ranked receiver in fantasy football last year and is expected to finish at 9th in 2022. QB Josh Allen, the Bills Defense, and TE Dawson Knox are other players to watch for fantasy purposes.

This will be a tough, defensive battle that’ll come down to the final quarter.

I have the Bills taking this one on the road with Von Miller hungry and their upgraded defense ready to feast. Josh Allen is the better of the two quarterbacks and he’ll shine on prime-time television.