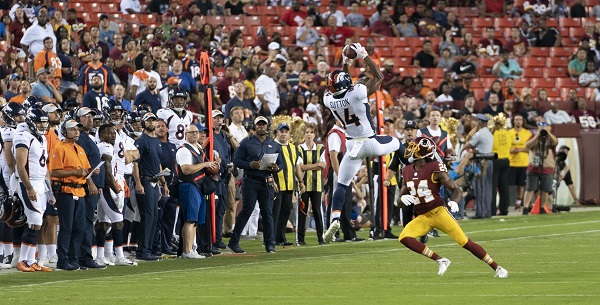 This week we’re taking quality over quantity when evaluating this Sunday’s Props for Thought. We’re going to take advantage of some injuries and maximize the hot hand. Without further ado, let’s dive into the best Week 4 NFL Player Props.

Jalen Hurts has been on fire to start the season. All he’s done is produce huge stat lines and lead his team to a 3-0 start. He’s racked up 4 passing touchdowns, 3 rushing touchdowns, and he’s thrown for over 900 yards. Tack onto that 167 rushing yards on the season so far to boot. Hurts is an obvious must start in fantasy football, and this week he’s a must bet for this prop.

This line being given out by Fanduel is very conservative. Especially considering that Hurts has crushed this number in each of the first three games. In two of them he just threw for over 300 yards. Hurts is home this weekend, and the only reason to not play the over is if Hurricane Ian brings some weather concerns. Philly has generated big plays in the passing game each week, and that will continue Sunday.

The Jags are 2-1, but they haven’t faced an offense like this yet, so their defensive numbers don’t mean anything. They have yet to face off against a true #1 receiver, and Philly arguably has two. The Eagles are going to ride another big game from Hurts to 4-0 this week.

Expect Hurts to have 288 yards through the air and 45 yards on the ground, easily surpassing 298.5 combined. This is my #1 Wicked Player Prop this week.

I know a good thing when I see it, and Nick Chubb is just that. I’ve been on his props all season, given the situation at quarterback and their coach’s desire to run the football. Leading the two headed monster that is the Browns backfield, Chubb has amassed 341 yards through 3 weeks. He’s also scored 4 times and eclipsed 100 yards in two games.

The Falcons haven’t been great against the run this season, giving up 88 yards per game to running backs. That’s without having played a team with a running game as good as Cleveland’s, or any back of Chubb’s caliber. Expect Cleveland to take control of this game early and control the pace, which is what Chubb is best at. Chubb is the 5th highest priced running back in Daily Fantasy Football, with a price of $7,900. Its worth using that number to see what his projected floor is, if you double his price its 15.8 points. For a guy who doesn’t catch the ball out of the backfield at a high rate, they are projecting him to score at least 1 TD, and get to 90 yards, just like I am.

BetRivers has this priced at -117 which is the best price out there and good enough for a standalone. However, at -182 to score a touchdown, that’s not a good enough price on a stand alone bet. Keep reading to find out how to also get value out of that.

Is Russ falling off? Are the Raiders terrible? I’m not sure the answer to either of those. However, it’s more likely that the Raiders are terrible, and that Russ takes advantage of a team in disarray.

Before last night, Sutton was 3rd in receiving yards this season, and after last night he is 7th. Jeudy is a different story and is far more the home-run hitter in that offense. Sutton is the possession receiver and has had a stellar year so far. He has yet to have less than 72 yards in a game and has seen double digit targets in each of his last two games. This is a productive receiver with a capable quarterback, and he’s absolutely going to get at least 70 yards for the 4th straight game.

Jeudy is a little bit different, and this play on his over is about his upside, and the relatively low number. Jerry is the type of player that could hit this over with one catch, because he’s explosive on the outside. Additionally, with Melvin Gordon questionable, his absence would give both guys an extra target. The Raiders are an absolute mess, and their defense has played badly. They are giving up a ton of yards per game, with 273 of those being through the air. The Broncos need to get their offense clicking, and there’s no better place than Las Vegas for that this weekend. Both players go over, you can book it.

Cooper Kupp – The number hasn’t been released yet for their Monday night matchup at San Fran, but seriously, does it matter? This guy is a machine, and the Rams best offensive player. His anytime touchdown scorer number will be somewhere around -170. If it’s -200 or better, parlaying that with a Nick Chubb anytime TD s how to get value on two guys that I feel very confident will find the endzone.

If “Death, Taxes and Celtics 2Q” wasn’t already taken, I’d use it here for Kupp, because it’s as close to sure thing as there is.

Justin Jefferson (+110) – Jefferson hasn’t scored since week 1, and honestly, he’s looked like crap. He’s been locked down by two good cornerbacks the last two weeks. However, he bounces back this week for a score across the pond.

Dawson Knox (+250) – Knox is due, and this game between Baltimore and Buffalo is going to be a shootout. Look for Knox to get in the endzone for the first time this year

Stefon Diggs (-110) – Add this one to your Kupp/Chubb parlay if you want or bet it alone. Diggs in the endzone is going to happen again.

Mark Andrews (+117) – Lamar will find Andrews at least once in the endzone this week. Buffalo’s D is banged up and Andrews is Jacksons safety blanket.