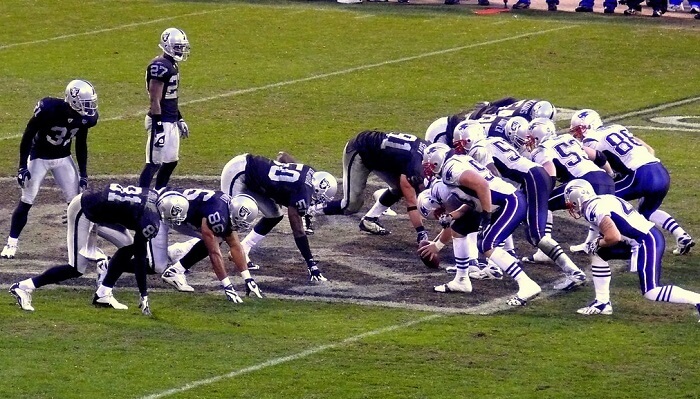 This week 15 matchup between the New England Patriots (7-6) and Las Vegas Raiders (5-8) is sure to be intriguing. There are several key storylines surrounding this game including that it’s against ex-Patriots Offensive Coordinator Josh McDaniel’s. McDaniel’s left New England in the offseason to become the Raiders head coach this season. Let’s dive into this Patriots at Raiders preview and betting picks.

A loss eliminates the Raiders from playoff contention, while a loss for New England puts them on the outside looking in going into week 16. With only a few weeks left in the regular season, every game is magnified from here on out.

The Las Vegas Raiders are coming off a tough Thursday Night loss against the Los Angeles Rams in week 14. After leading 16-3 in the fourth quarter, Las Vegas seemed to be on the brink of securing their 6th victory. But newly acquired Baker Mayfield led a game-winning drive to make it 17-16, which might have sealed their fate in terms of making the playoffs. It was a heartbreaking loss for the Raiders, who would have found themselves in the thick of things in the AFC Wild Card race.

Mac Jones and the Patriots came out on top 27-13 in their Monday Night matchup against the Arizona Cardinals. Star quarterback Kyler Murray left the game after just a few plays due to a non-contact leg injury. With Colt McCoy under center the rest of the evening, they couldn’t stop the Patriots vaunted pass rush with three sacks from Josh Uche. Overall, it wasn’t a perfect performance by New England, but it was a step in the right direction.

The game on Sunday will be broadcast on FOX, with game time set for 4:05 pm ET. Kenny Albert, Jonathan Vilma, and sideline reporter Shannon Spake will be on the call. You can listen to the game locally on 98.5, The Sports Hub in Boston.

Mac Jones: The Raiders are near the very bottom of the league in terms of passing yards allowed per game. We’ll see Matt Patricia dial up more downfield passes to try and exploit Las Vegas’s weakness in the secondary.

Josh Jacobs: Even though Jacobs has a tough matchup against the Patriots, he’s still a RB1 and will play like it. He should still get a high volume of carries and still be the focal point of the Las Vegas offense going into Sunday.

Foster Moreau: The Patriots have done a tremendous job all season in limiting tight end production from their opponents. With DeVante Adams on the outside and Jacobs running the ball his opportunities will be limited.

Derek Carr: The New England defense has held their opponents to zero passing TDs over the past five games. The Patriots also run a lot of man coverage, which Derek Carr tends to struggle against.

The Patriots and Mac Jones will have a nice day offensively, while the Raiders will make just enough mistakes to hand the Patriots a 27-21 victory. From a betting angle, this line has shifted a lot this week. Initially, the Patriots were favored by 1 and some sharp money must have come in on the Raiders to flip it the other way. I still like the Pats to win this one outright and that’s where the value is this week at plus money.