On the Docket: The Judge’s Week 8 CFB Picks 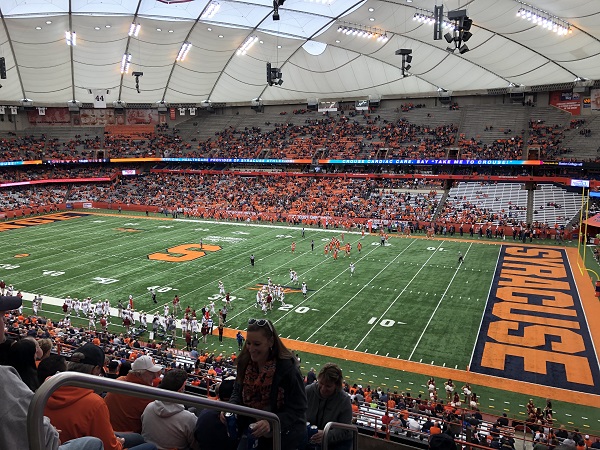 I hope you have recovered from the mayhem that was Week 7 because we are back for more in Week 8. This week we get five matchups between ranked teams and several critical conference tilts. We’ll see some teams fade into 2022 oblivion and we will see some teams rally to put their stamp on the 2022 season. Get prepared for another wild week of what is the 2022 college football season with this week 8 college football preview.

Here are your CFB Week 8 Picks. Court is once again in session.

Week 8 gives us an early matchup against two undefeated teams in the ACC, Clemson, and Syracuse. Syracuse had a moment last week, knocking off a ranked NC State team at home before the Orange faithful flooded the field. On the other side, Clemson has turned a corner and have wins over Wake Forest, NC State, and Florida State.

Syracuse is flying way too close to the sun.

This matchup features two teams hoping to gain some positive traction and finish the season on a strong note. Kansas raced off to a 5-0 start and garnered national attention for their surprising turnaround. Unfortunately for the Jayhawks, they have dropped the last two and look to be trending down. Baylor sits at 3-3 but has failed to beat any team of note just yet.

This pick is not a vote of confidence in Baylor, but a buy-in on Kansas’s downward trend. If quarterback Jalon Daniels is still out on Saturday, go ahead and count on a tough day for the Jayhawks. Baylor is coming off a strong offensive performance against West Virginia and will be able to score plenty. Especially against a team who has failed to keep anyone not named Iowa State under 35 points.

Oregon hosts UCLA in what might be the game of the week. Both teams are coming off a bye and will be fully prepared for this showdown between ranked Pac-12 teams. College Gameday will be in Eugene on Saturday and the atmosphere will be electric for this one.

This one is simple, folks. The Ducks have a stiff rush defense and will limit the UCLA offense who likes to run more than throw. The Oregon offense, led by quarterback Bo Nix, will be comfortable at home and score plenty of points. Did I mention this game is at Autzen Stadium? Everything is lined up for the Ducks to roll in this one.

These are two teams sitting at the top of the SEC West standings. Currently Ole Miss is in sole possession of the lead after Tennessee toppled Alabama in Week 7. LSU comes off a double-digit win in the Swamp. We might have another great one on our hands.

Lately, the Ole Miss defense has left much to be desired, giving up 28 points to a horrid Vanderbilt team and 34 points to offensively challenged Auburn. Nobody has been able to keep up with the Ole Miss offense. Count on LSU to keep the Rebel offense off the field and put up enough points to win in Death Valley.

Oklahoma State and Texas get us started in Week 8. This is a game between two teams trying to stay in the race for the Big 12 title. Texas comes off a puzzling 24-21 win over Iowa State while Oklahoma State lost in double-overtime last week to TCU. There are many ways to overthink this, but generally the simplest explanation is the best.

That explanation is that Oklahoma State is getting 6 points at home. You can move on to the next one if you want. Further, even though Texas has had some great moments this season, they really have not beaten anybody of note. The Cowboys have won 12 straight at home and 7 straight after a loss. Need I go on?

Alabama has been on the wrong side of highlight reels all week long. This is because they lost on a last-second field goal to Tennessee in Week 7. Mississippi State sits at 5-2 with some quality wins, but a few stinkers as well. Both teams are trying to bounce back and put another tally in the win column.

The message you are probably hearing is Alabama is going to rebound after the loss. Well, the Bulldogs are coming off a loss, too. Add in that this Alabama team seems to have some fatal flaws uncharacteristic of Nick Saban teams. This all points to Mississippi State being able to score enough points to hang with the Crimson Tide. Take the points here.

Both teams here are coming off Week 7 losses and look to bounce back in Week 8. Most notably, Penn State’s loss came as a 41-17 shellacking at Michigan. Minnesota has lost two in a row to Purdue and Illinois.

How about some American for your Saturday night? UCF has won four straight since a Week 2 loss to Louisville. On the other side, East Carolina erased a 17-point deficit to beat Memphis in four overtimes in Week 7. Can the Pirates slow down the high-powered UCF offense?

The short answer is no. The Judge previewed this season with a warning that Gus Malzahn with a dual-threat quarterback is extremely dangerous. That’s what the Knights have with John Rhys Plumlee. On the other side of the ball, the Knights have yet to give up more than 20 points to an opponent. That’s a winning recipe for UCF. If you aren’t already riding the Knights, hop on right now.