On the Docket: CFB Week 1 Picks and Odds 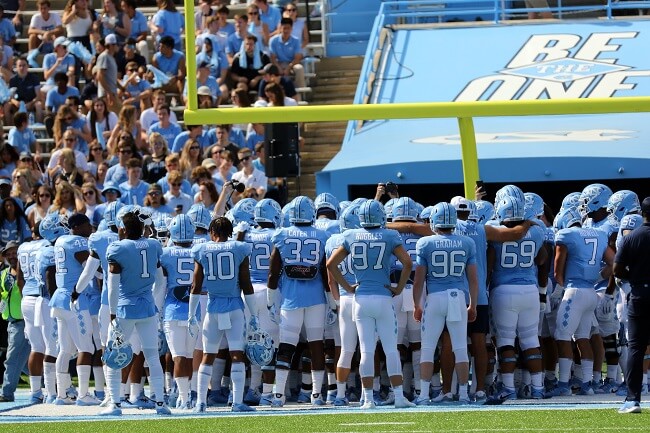 We got about what we expected out of Week 0. Scott Frost breathed a sigh of relief that his return ticket was still valid, and Vanderbilt made the most of their trip to Hawaii. Most importantly, we got that dopamine we’ve been longing for since January.

College football Week 1. We have had countless departures, returns, transfers, hirings, and firings since January. Unfortunately, we do not have the luxury of combing through data and references at this point of the season. Talking heads have told us what to think about each team, albeit before these teams have taken a single snap. The college football world will never again know less about each team than it does now.

That means we are afforded an opportunity to get ahead of trends, refuse faulty logic, and take advantage of some generous betting lines.

Here are your CFB Week 1 picks that will take you through the long Labor Day weekend. Court is now officially in session.

North Carolina travels to Boone as an underdog in the first game of the Week 1 Docket. The 2019 iteration of this game saw App State pull out a 34-31 win in Chapel Hill. What can we take away from that game? Offense. The Tar Heels got their offense cooking against FAMU in Week 0 with Drake Maye throwing for 5 touchdowns. We have not yet had the opportunity to see the Mountaineers with the ball. However, they will be led by Chase Brice, who has spent plenty of time in the ACC.

What better way can you start off the day than cheering for the scoreboard?

The last time these two teams met was during the Jimmy Carter administration. While Georgia and Oregon have not played in 45 years, they are familiar with each other. The Dawgs have faced Ducks quarterback Bo Nix three times. Oregon head coach Dan Lanning spent his last four years in Athens as a position coach and defensive coordinator. Despite the knowledge Lanning took with him to Eugene, Oregon will struggle against the talent Kirby Smart has amassed at Georgia. The Ducks aren’t to be discounted, however, as Mario Cristobal left enough talent to compete in games like this.

Expect the Ducks to keep it respectable and score late to cover.

This is one of those cases where you aren’t betting on a particular team, but instead betting against the other. Arkansas was one of the exciting teams of 2021. Sam Pittman took Fayetteville by storm and has brought a lot of excitement to the program. The hype is carrying into 2022, but Your Honor finds the hype unwarranted. When playing against the spread, public perception can be misleading. Don’t be misled by the noise in Arkansas.

Vanderbilt looked surprisingly competent in Week 0 at Hawaii. Elon unknown in the world of college football, but the Commodore performance last week should warrant a bigger spread than 18. That’s it. We’re riding the Vandy wave.

This is the CFB Week 1 headliner, so we must bet it, right? You don’t need any encouragement to watch this one. It’s a top-5 matchup against two of the most storied programs in this sport. You would think a top-5 matchup would warrant a smaller spread. NOT SO FAST ($1 to Coach Corso). This spread shows that while both teams are ranked in the top 5, the Buckeyes are in a different class. The national title contender class.

Ohio State is going to score heaps of points and Notre Dame will be left in the dust.

You will never see a replay of last year’s matchup between these two in a masterclass for refereeing. If you were lucky enough to see that game, you know that each of these teams has dynamic playmakers on the offensive side of the ball.

Sam Henigan leads Memphis as the 2021 leader of all FBS true freshman quarterbacks in completions, yards, and touchdowns. Will Rogers takes the helm for Mike Leach’s offense. It was one of the most dangerous units in the country last year.

What do we get with these two teams?  A heaping of points.

Just for a moment, put aside all jokes about Brian Kelly and his ridiculous new accent.  He’s one of the winningest active coaches in college football and has an arsenal of talent in Baton Rouge.  He has what might be an elite defense and weapons at key positions on offense.  Florida State, however, already has a tune-up game under its belt.  The kicker?  This is a “neutral site” game played in New Orleans.  Laissez les bons temps rouler.

We’ve discussed betting against a particular team. That is the case again here with Georgia Tech, one of the worst Power 5 teams this season. Also, we are picking an underestimated Clemson team coming off a “down” year with everything to prove. Together, you can confidently lay the points as Clemson will cover the 23 plus some, and easily.

Go ahead and imagine yourself on Monday evening, feet propped up, counting the winnings from Saturday and Sunday. Now watching the Tigers roll in Atlanta.