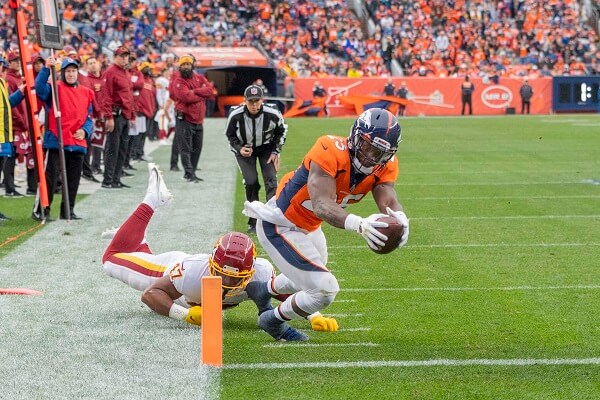 NFL Week 4 is in the books. Before we jump into this NFL week 5 Thursday night matchup, let’s have a little look back. What a wild ride week 4 was with 14 out of 16 games being decided by one score.

The game between the Vikings and Saints in London came down to a failed 61-yard double doink from Will Lutz. The kick would have won the game for the Saints, and it was just a little off. Buffalo came back from a 20-3 deficit to beat Baltimore, while Seattle and Detroit were involved in a college-like shootout. The game ended with Seattle coming out on top 48-45. It’s hard to comprehend, but Geno Smith has played better than Russell Wilson so far this season. The Jets defense earned them a victory over the Steelers, and Zach Wilson had a very good 4th quarter.

Both teams kicking off week 5 Thursday night had high hopes prior to the season. However, neither have had the start they envisioned to begin the 2022 season. The Denver Broncos acquired Russell Wilson from the Seahawks. Then they signed him to a massive extension that pays him $245 million over 5 years. This was in hopes of boosting their offense to compete with all the firepower in the AFC West. But Wilson hasn’t met expectations and Denver has an offense ranked in the bottom half of the league.

The Broncos’ saving grace has been their defense, currently ranked top 5 in both yards and points per game. Indianapolis decided to move on from Carson Wentz and signed Matt Ryan. Last year, they had a great offensive line and run game, and Wentz wasn’t amazing, but he limited turnovers. This season, Indianapolis is ranked last in scoring, their offensive line is atrocious, and Jonathan Taylor has only scored once. The Colts are 1-2-1, and the Broncos are 2-2, will this be the week one of these teams turns their season around? Let’s dive in.

On Sunday, Indianapolis faced off against the Tennessee Titans. In that game, Matt Ryan did throw for a season high 356 yards, but his play was mostly disappointing. Ryan was brought in to win the AFC South and compete for a Championship but all he’s done is turn the football over.

Everything can change fast in the NFL, and the Colts offensive line went from top tier to hot garbage overnight. Their new quarterback is 37 years old and needs a stout offensive line to be effective. Not to mention, their run game has essentially gone missing. Even worse news is Jonathan Taylor being ruled out yesterday due to an ankle injury. Backup Nyheim Hines will get the start, but there’s very few in the NFL that can replace Taylor.

This is going to be an uphill battle for the Colts in their week 5 Thursday night matchup. They haven’t been great on defense so far in 2022. This is even after acquiring Pro Bowl linebacker Shaquille Leonard, something the team was truly excited about. However, he broke his nose and suffered a concussion last week and has been ruled out for this game.

The Broncos don’t have a high-powered offense that the Colts must worry about. However, Indianapolis cannot afford to go down early like they did against the Titans. The offense needs to make use of their tight ends, something they did with great success in week 4. Expect Matt Ryan to take some hits in this one. He will have to limit the turnovers to give his team a chance to win their second game of the year.

Sunday’s game against the Las Vegas Raiders was an ugly one, with the score ending 32-23 in favor of Vegas. It was the first time this season that the Broncos defense had given up more than 17 points. The Raiders offense hasn’t been great this year, but they moved the ball with ease on the ground. Vegas running back Josh Jacobs had a career day with 144 rushing yards, a few catches and 2 touchdowns. Derek Carr didn’t have to do too much, throwing for a measly 188 yards and no touchdowns.

On offense, Russell Wilson had his best game of the season, finishing 17/25 with 237 yards and 3 total touchdowns. The game was close until the momentum changed in the 2nd quarter, when running back Melvin Gordon fumbled the ball. A member of the Raiders secondary team scooped the loose ball up and took it back for a touchdown. Gordon has fumbled the ball 4 times in 4 games and is now expected to get the starting role since Javonte Williams is out for the season.

If Denver wants to move to 3-2 on the season, the first issue they’ll have to address is their turnovers. Russell Wilson hasn’t yet played like a quarterback who can come back from multiple scores. They cannot give the opposing team extra possessions in this one. The second issue is their run defense. If Indianapolis gets the run game going and opens passing options for Ryan, it’ll be a long night for Denver.

Another key player lost on Sunday was Randy Gregory. He was placed on the Injured Reserve and will miss at least 4 games recovering from meniscus surgery. On Tuesday, Denver signed running back Latavius Murray to replace the injured Javonte Williams who tore his ACL and LCL. Murray more than likely won’t be playing in this NFL week 5 Thursday night matchup. Expect Melvin Gordon and Mike Boone getting the bulk of the carries.

With Jonathan Taylor missing Thursday night’s game, you should fire up Nyheim Hines as a Flex option. You can’t replace Taylor, and Hines certainly won’t put up close to the same numbers. However, he’s bound to put up points in Taylors absence. One thing going for Hines if you’re in a PPR league would be how involved he is in the passing game. Expect him to catch at least 3-4 passes tonight.

Like the Colts, the fantasy options for the Broncos are quite limited. You should play Russell Wilson; his performance last week is a sign of him getting back on track. Another great option for Denver would be to start their defense/special teams. Their performance was disappointing last week, but besides that they’ve been great.

Courtland Sutton is another must start, especially in PPR leagues because he’s averaging 6 receptions and 86 yards per game.

Russel Wilson will keep it rolling after a solid outing last week. The Broncos have the better quarterback and better defense. Without their Pro Bowl running back and behind their Swiss cheese offensive line, Denver’s defense will feast on Matt Ryan.