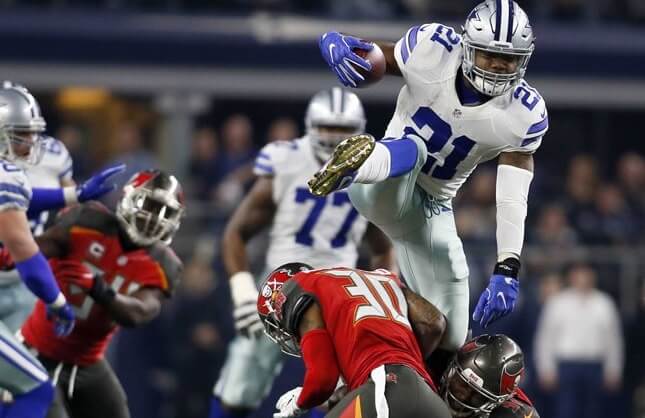 The (11-4) Dallas Cowboys travel to Nashville to take on the (7-8) Tennessee Titans to kick off Week 17. Dallas has already clinched a playoff berth, while Tennessee finds themselves in a battle for 1st in the AFC South Division. The Titans will be without quarterback Ryan Tannehill and running back Derrick Henry, so it’s not surprising that Tennessee opens as a whopping 12.5-point underdog. Let’s dive into this NFL Week 17 TNF picks and game preview and decide if they can cover the spread.

Last week against the Eagles, the Cowboys offense was firing on all cylinders. Quarterback Dak Prescott had his best game of the season against a top 3 defense in the NFL. They’ve now won five out of their last six games, and Dallas looks to stay strong heading into the playoffs.

On offense, look for Prescott and his wide receivers to have huge games. Tennessee has one of the worst defensive secondary’s in the league, ranking 31st in passing yards allowed per game. After throwing for 347 yards and three touchdowns last week, expect another stat line like that one. Dallas has established the run game well this year, but the Titans are impressive against the run. The Cowboys will come out and give a few touches to Zeke and Tony Pollard. However, if it’s not working for them, expect Dak to air the ball out early and often.

The Titans will be without their two best offensive options, so Dallas won’t have too much trouble with containing the Titans offense. Dallas’ weak spot on the defensive side of the ball is against the run, but they’ll be able to stack the box. Opposing quarterback Malik Willis has yet to total 100 pass yards in a game. The Dallas defense will focus on the run game and if that is contained, it’ll be an ugly one for Tennessee.

This week is a little odd for Tennessee. Win or lose, their fate will still be decided in week 18 against the Jaguars. Many critics have wondered if the Titans will decide to rest some key starters to get everyone as healthy as possible. If you take one look at the injury report, it looks quite clear that the coaching staff has opted to rest most of the starters. There are seven players who have already been ruled out. Additionally, three are designated as doubtful, including star running back Derrick Henry.

Tennessee has had a very predictable game plan this year. Give the ball to King Henry and let him do this thing. However, with him doubtful for this game, they will need to come up with a fresher plan in this one. Rookie quarterback Malik Willis hasn’t shown a glimpse of being able to carry an offense, or even be serviceable at all. Additionally, Hassan Haskins will be the featured back for the first time in his career and there’s no telling how the former Michigan standout will perform. However, what is clear is that he has his work cut out for him.

Defensively, the Titans are in a world of trouble. They are great against the run, but they’re just about the worst team against the pass. Dallas has been a balanced team, so if the run game stalls then Tennessee will then have to worry about stopping them through the air. The Cowboys have a slew of offensive weapons including a pretty good tight end in Dalton Schultz.

The Titans have nothing to play for in Week 17. In addition, they are without their most dangerous offensive weapon. The Titans will be lucky to lose by less than two touchdowns. On the defensive side of the ball, the Cowboys will feast on the rookie quarterback. On offense, they’ll be able to do whatever they want through the air.