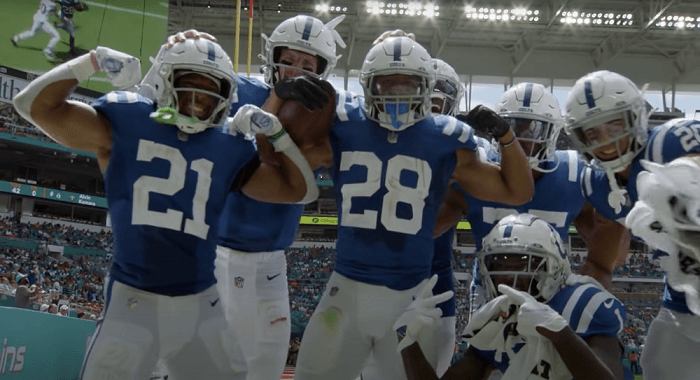 Monday Night Football Week 12 features two teams that are at the bottom of the barrel in their respective divisions. However, there are still several interesting storylines in this one, even if you aren’t a fan of either team. The rookie quarterback for the Steelers, the rookie head coach for the Colts – there is plenty to look at in this one. Plus, we can’t forget our betting angles for this post Thanksgiving edition of NFL Week 12 MNF.

Pittsburgh enters this Monday night matchup having lost three of their last four games. At 3-7 they will take on the spoiler role for the remainder of the season as they’ve been officially eliminated from the playoff hunt.

A bright spot for this offense has been the recently rejuvenated run game. The Steelers averaged just over 87 rushing yards per game through the first seven games, but have averaged 154 the last three weeks. Credit this to Najee Harris finding his groove. Harris is not having the sophomore season he would have hoped for to this point. However, there is still optimism in Pittsburgh as he’s averaging 154 yards on the ground the past two games. Pro Bowl wide receiver Diontae Johnson is also not following up a strong 2021 season as he would have liked. Johnson has yet to eclipse the 100-yard mark nor has he found the end zone this season. Regardless of their place in the standings, Pittsburgh needs to get these two going for the rest of the season.

Monday night in Indianapolis is a winnable football game for this team and they are going to need their stars to show out.

The Pittsburgh defensive unit is not giving their offense much of a fighting chance this season. They rank 27th in the league in yards allowed per game (387) and 26th in points allowed (24.4). They will face a struggling Colts offense that ranks 31st in the league in points per game (15.7). If there was ever a game to get a team back on track, it’s this one. As abysmal as this defensive unit has been, they’ve been successful against the run allowing 103 yards per game, good for 7th in the NFL. For a team that ranked last in the NFL against the run in 2021, they put in the work this offseason.

They face a tall task in trying to stop last year’s rushing champ, Jonathan Taylor. Taylor has not been himself this season, but he is still dangerous every time he touches the ball. 2021 Defensive Player of the Year, TJ Watt, has made it clear that Pittsburgh takes a lot pride in their improved run defense and will look to carry this into the pass game.

Monday night is a must win for Indy if they want to keep their slim playoff hopes alive. The Colts have struggled to put the ball in the end zone this season. They are averaging 15.7 points per game which is the 31st worst in the NFL. This can be attributed to multiple factors, but the most obvious is the underwhelming year Jonathan Taylor is having compared to his 2021 campaign. It’s important to note Taylor has also missed a few games due to injury this season. However, he has played in and looked good in the past two games. He scored a touchdown in both of these games and averaged 115 yards per game on the ground. Taylor has to maintain this success the rest of the season if the Colts have any chance of making the postseason.

Wide receiver Michael Pittman is just barely on pace to eclipse the 1,000 yards mark for the second straight season. Additionally, he is facing a defense on Monday that struggles tremendously in the passing game. Matt Ryan will be looking for Pittman early and often Monday night.

The Indianapolis defense is 3rd best in the NFL in yards allowed per game (323.4). They are coming off a brutal 4th quarter collapse to Philadelphia. In that one, they allowed the game winning touchdown in the final 90 seconds. Still, holding that Philadelphia offense to 17 points is no small feat and Indy should be optimistic in their defensive unit this week.

Losing Linebacker Shaquille Leonard for the season is a setback, but this defense can still get it done. They face a young, inexperienced quarterback in Pittsburgh’s Kenny Pickett. Pickett will need to be sharp in this one as the Colts’ defense is only allowing 194 passing yards per game. The run defense will need to be on their game, as Najee Harris is beginning to heat up these past couple of weeks. The key to this game will be shutting down the run game of the Steelers.

Jonathan Taylor and Najee Harris are both starting to pick up their game, and at the same time. Wide receiver Michael Pittman Jr. is due for a big game and a touchdown. The Steelers defense has not been good. All signs point to Indianapolis winning this one. Expect Pittman and Taylor to both have big games on NFL Week 12 MNF, and the Colts will get a victory at home.