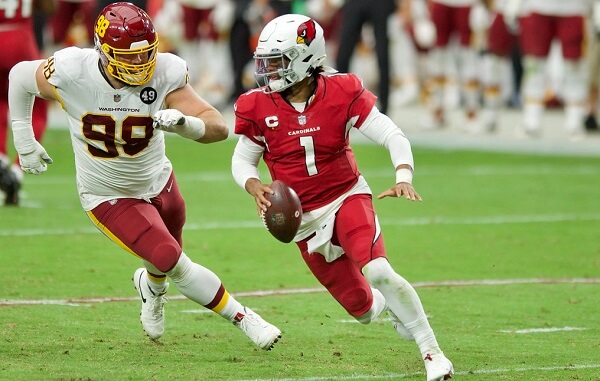 The 5-4 San Francisco 49ers “visit” the 4-6 Arizona Cardinals for NFL Week 11 MNF. This game will be played south of the border in Mexico City but is considered a home game for Arizona. This will be an excellent divisional battle as both teams have been playing solid football the last several weeks.

Deebo Samuel. George Kittle. Christian McCaffrey. Those three names could be this whole 49ers preview. San Francisco struggled at the beginning of the year, mostly due to quarterback issues. However, they’ve played well since turning the reigns back over to Jimmy G.

The Niners are a healthy team and are stacked on both sides of the football. This game will come down to how well the Niners can score. Frankly, it should be quite easy seeing how Arizona has given up 30+ points in three of the last four games. San Francisco will be ready to rock on offense.

The key in this one will be to get McCaffrey going because the Cards don’t have the linebacking core to keep up with him. Running up the gut will be difficult with JJ Watt and a pretty good Cardinals defensive line. Due to that, look for short screens or dump outs to the flat where Christian can use his legs and make people miss.

The Arizona Cardinals are more banged up than the Niners, especially offensively. They’ve played close games the last four weeks but couldn’t close it out in the 4th quarter until last week. They are riding high off a win and wide receiver DeAndre Hopkins has been lighting it up since returning from suspension.

The major matchup for Arizona will be which of their receivers play, against a tough Niners secondary. The Cardinals have four excellent wide receivers, and either Kyler Murray or Colt McCoy will utilize them to put up points. A key matchup to watch in this one will be with DeAndre Hopkins. If he plays, he’ll likely draw Charvarius Ward who has been having a good season – plus some double teams. We’ll be keeping an eye on how that opens up opportunities for Rondale Moore, and Hollywood Brown.

This game will be a high scoring affair, but also a tight game throughout. Neither defense will be able to contain the opposing high-octane offense. However, at the end the Niners will kick a field goal to seal a victory and challenge Seattle for the top divisional spot.

From a betting perspective, take the Cardinals +8 whether Murray ends up playing or not. When Murray is ruled in/out, expect this line to move so grab it now because either way it’s a number the Cards can cover. Arizona would have covered or pushed on this number in 70% of their games this season. Plus, they’ve only gotten better since Hopkins got back.

San Francisco is the better team but Arizona will keep up.