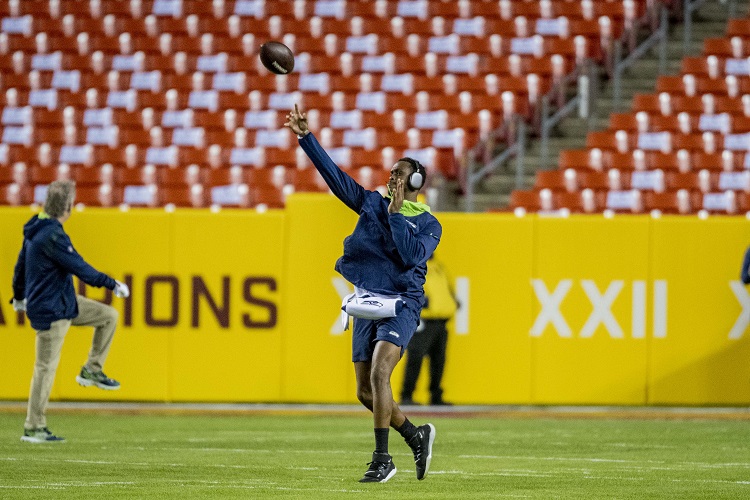 We’re now just two weeks away from the NFL regular season officially kicking off. It’s the time of year where every head coach’s ‘what to figure out’ list includes who’s starting and who isn’t. This is the time of year in the NFL that is defined by positional battles.

Panthers head coach Matt Rhule just made a big decision on one of his own positional battles. Rhule named Baker Mayfield the starting quarterback for week one, officially ending the biggest quarterback competition of this pre-season.

There are still plenty more NFL positional battles that need to be figured out. Let’s break down a few of them here and give our prediction of who the winners will be.

The departure of Russell Wilson from Seattle has led to a QB battle on a team that had stability at the position for years. Drew Lock was included in the haul Denver had to send to Seattle in the trade for Wilson. Lock had shown flashes in Denver, but mainly inconsistency. Geno Smith is the other guy fighting for this job. Smith is now a nine-year NFL veteran that has established himself as a fringe starter/backup. Smith may feel like the more dependable option, but he’s got limited upside.

This job was completely up in the air at the beginning of training camp. There wasn’t much of a buzz about who had the inside track at landing the job. In these situations, preseason play is a main indicator of who will eventually get the starting nod. In the Seahawks first game, both quarterbacks played well, but Drew Lock stole the show, going 11-15 with 102 yards and two touchdowns. The big twist came right before the team’s second preseason game when Drew Lock tested positive for Covid. Many thought this was Smith’s chance to gain control in this race. Smith didn’t have that great of a game, and the Seahawks ended up losing by sixteen. This game likely helped Lock’s chances, even though he was watching from his couch.

The Seahawks will have one more preseason game to figure out who the team’s starting quarterback will be. Lock, who returned to Seahawks practice, will likely be ready to go for the preseason finale. Expect Drew Lock to get the nod as he’s shown to be the better option with a higher potential ceiling. He’ll have to find a way to limit the turnovers, which usually comes with experience. Lock’s the more exciting one to watch, and he’s the guy the fanbase wants in there too.

If Lock does end up getting the job, he won’t have to wait long to face the team that got rid of him. Denver comes to town Monday night of week one and Lock will be revved and ready to show off.

If you’re a 22-year-old Steelers fan you wouldn’t even be able to remember the Steelers having a quarterback battle. It feels like Ben Roethlisberger has held this position forever. Father time arrived for the Steelers all-time great, forcing Big Ben to hang up his cleats. What the Steelers did next created a 3-way NFL positional battle.

The Steelers decided to sign free agent quarterback Mitch Trubisky to a two-year deal back in March. The big question was what the team would decide to do with their first-round pick in the draft. After careful consideration, the Steelers decided to take the Pitt star quarterback Kenny Pickett. These two moves were suggestive that the team was leaning away from going the conservative route with veteran Mason Rudolph.

Trubisky seemed to have the head start in this battle from the start of camp. As is typically the case, Pittsburgh wants the young quarterback to develop before throwing him into the fire. There were reports early in training camp that Pickett was having difficulties, so he was originally listed at third on the depth chart. Through two preseason contests, the rookie has made a major positive impression. Each quarterback has played in each game, and they’ve all looked decent, but Pickett has looked the best. The first-round pick has been composed in the pocket, and even threw a game winning touchdown in his first game.

Despite the way Pickett’s impressed, it still feels like It’s Trubisky’s job to lose. The quarterback will have the opportunity to lead Pittsburgh into the post-Roethlisberger era. As a result of Pickett’s play during preseason action, he took over the backup quarterback spot for this team. Rudolph also played well in preseason, but the team has seen enough of him in regular season action. This might mean that the team decides to deal Rudolph in a trade before the season starts. Each of these guys will have one more audition this Sunday against the Lions, before it all starts to count.

The loss of Devante Adams via trade and Marquez Valdes-Scantling via free agency has shaken up this wide receiver group. This may be one of the top NFL positional battles this year. Allen Lazard is set to be the top returning receiver to this Packers offense. The team also decided to sign wide receiver Sammy Watkins over the off-season.

This receiving core has had the spotlight on them after quarterback Aaron Rodgers recently called them out to the media. Rodgers was upset about drops and bad route running in practice. Rodgers will have to adjust to a whole different receiving core this year. Lazard and Watkins will be fighting to fill the shoes of Devante Adams as the team’s top wide receiver. Neither of these guys have gotten any action through the first two preseason games. In the team’s preseason finale on Thursday, the tone stayed the same as zero offensive starters saw the field.

Lazard has been a solid threat in the passing game for the Packers over the last three seasons. Last year Lazard had forty receptions for 513 yards and eight touchdowns. They were career highs for the receiver in each category. Watkins spent the 2021 season in Baltimore where he had career lows in receptions, reception yards, and touchdowns. Watkins, 29, is clearly passed his prime. He’ll have time to develop chemistry with Rodgers, which would be his best hope to get ahead in this race.

Further down the depth chart lies guys like Randall Cobb and rookie Christian Watson. Cobb has spent his entire twelve-year career with Rodgers in Green Bay, except for a year off in 2021 playing for the Texans. He was a guy that used to have the capability of exceeding 1,000 receiving yards in a season. Cobb can still make plays but will likely find himself as the third wide receiver. Packers second round pick, Christian Watson, was a guy that could have competed for the top receiver spot. He would’ve had tough odds as a rookie, now it seems impossible as he recovers from a right knee injury. Watson hasn’t played in either preseason game but could find himself back at practice soon.

Lazard seems to be the most fit to win this battle. He won’t put up the kind of numbers that Adams put up, but he’ll get a lot of targets. Lazard will have a talented quarterback throwing to him. Now’s his time to shine.

There are surely other NFL positional battles happening around the league but these are the top 3 to watch for.