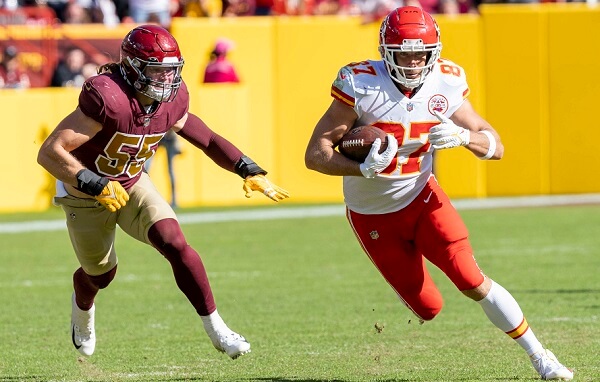 Thanksgiving may be over, but the real feast comes on Sunday. The remaining NFL Week 12 schedule be played, and we’ve found the best player props for week 12. Here are our Best Week 12 Player Prop for the main course, and a few anytime touchdown scorers for dessert.

The Jags are on the wrong end of a trend right now, losing four of their last five games. They are getting another tough test this weekend as the Baltimore Ravens come to town. The Ravens have been excellent against the run this year, giving up just 86.4 YPG on the ground to opponents.

Etienne had been one of the hottest backs in the league heading into the team’s bye week. He rattled off three straight games of over 100 yards before falling back to earth against the Chiefs. It was a game script that forced the Jaguars to throw the ball a lot. You can expect a combination of stout run defense and playing from behind to limit Etienne’s carries and keep him under 70.5 rushing yards on Sunday.

Tyreek Hill is exciting to watch, and one of the best at bailing his quarterback out when under duress. He’s one of the best wide receivers in all of football and gets a juicy matchup against the Houston Texans this week at home. In ten games played this season, Hill has gone over Sunday’s number of 97.5 a total of five times. That number could have easily been seven if he had converted more catches in some games with monster target share.

The Texans are terrible, and you can expect most of the projected 47 game points to come from Miami. Houston hasn’t been good defensively this year, and will be without Derrick Stingley Jr. This leaves the Texans very vulnerable, especially to the deep ball. The Dolphins are going to blow the Texans out on Sunday, and Hill will easily get to 100 yards. Expect a monster game from him, as the Texans give up over 250 YPG through the air. Hill should feast.

It’s easy to get distracted by this talk about a broken thumb and think that’s going to slow Aaron Rodgers down. He’s already been playing with it. Also, despite his team losing and him not putting up impressive numbers, he has been throwing touchdowns. In eleven games played, he has failed to throw at least two touchdowns in only three games. The former MVP will be without his rookie wide receiver Romeo Doubs. However, the Packers are going to be forced to throw the ball Sunday night in Philadelphia.

The Eagles should be able to build a lead with their explosive offense at home, forcing the Packers to play catch up. Even in a close game we expect him to throw for two touchdowns. The Green Bay running backs can catch the ball, and Rodgers has always been a wizard in the red zone. This prop is too juicy at plus money not to play.

Travis Kelce is the #1 receiver on the league’s best offensive team. There is no reason to think that will change this week against the struggling Rams. It’s unlikely that the Rams will deploy Jalen Ramsey to cover Kelce, as that’s not what he does. Without that change, the Rams are going to really struggle to cover Kelce. Especially since the Chiefs do everything they can to get Kelce the ball.

This number is low, and a number that Kelce has gone over 70% of the time this year. Kelce should see double digit targets on Sunday. The absence of Kadarius Toney even gives Kelce a chance for an extra target or two. You can lock this Wicked Wager in, and cash that late window ticket.

Latavius Murray (+125) – The Broncos new starting running back gets into the endzone in a game that should feature the running game.

Cordarrelle Patterson (+150) – The Falcons don’t really have anyone else on offense, and Patterson has been reliable this year.

Davante Adams (-115) – Surprised this number is juiced more, so taking advantage of a likely outcome in a game with sneaky shootout potential.

Jack Stoll (+550) – Eagles tight ends haven’t been finding the endzone a ton this year. However, with Stoll taking the feature role in that position, the Eagles can take advantage of Green Bay and get this guy a score.