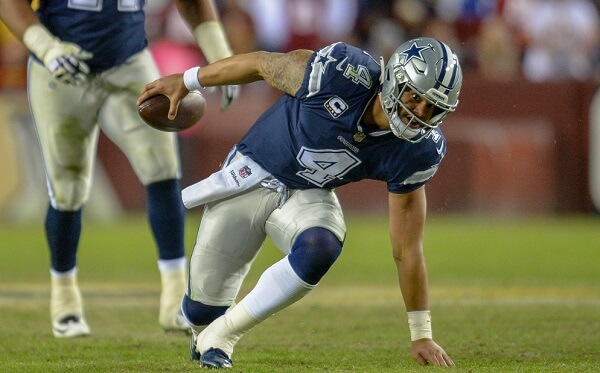 Everyone loves player props, because it’s a fun way to bet on the NFL without having to sweat the outcome of the actual game. We can dive into the games to find great value. Plus, we can bet outside of who wins, who covers and hitting point total overs or unders. It’s also an excellent idea to use information from season long Fantasy Football leagues to find the best prop plays. We’ve been cashing tickets all season long on player props, and that won’t stop Sunday. Let’s dive into the best week 11 player props.

In case you didn’t know, Lamar Jackson is the best running back on the Ravens again this year. He has already put-up great numbers on the season. His rushing prop this weekend is set at a number with a lot of value. Currently at 60.5, Jackson has gone over this total five times this season.

He is facing off against a Panthers team this Sunday that gives up 139.2 yards per game to their opponent on the ground. The Panthers have been able to hold mobile quarterbacks in check, but that was against the likes of Marcus Mariota and Daniel Jones. Jackson is a different beast, and he will have plenty of opportunities to run the ball this Sunday. Keep an eye on him, as he’s been dealing with an illness this week, but if he’s active he’s going to eclipse 60.5 rushing yards.

The Vikings are good despite their secondary not being great. That unit is giving up 281.9 yards per game to their opponents through the air. Expect Dak Prescott to take advantage of that this week. This is a number that he has only gone over once this season, and that was last week in their game at Green Bay. The Packers have a good secondary, and Dak was able to pile up 265 passing yards. This game has the 4th highest total of the Sunday slate at 48.5, which means we will see points.

The Cowboys, and specifically Dak, need a big win after their head coach completely blew the game last week. Dak has all of his weapons healthy, and he will be throwing it all over the field. The ascension of Tony Pollard means that Dak has a few more passing plays in store for him. Minnesota will put up points on their home field, meaning Dak will have to throw the ball to keep up. Prescott is getting back into the swing of things, including consecutive games where he’s surpassed his previous weeks yardage total. Look for Dallas to lose this game, but for Dak to get over 252.5 yards.

Coming off of their first loss of the season, the Eagles have a great opportunity to bounce back in a big way against the Colts this weekend. The game is in Indy, which means weather will not be a factor in this matchup. The line at 59.5 is disrespectful to a guy that’s rushed for 70+ in all but three games this season. Nick Siriani is going to get back to basics this week, which means he’s going to run the football. You can expect a heavy dose of the run, and Sanders is going to pile up yards. The Colts aren’t very good defensively and give up 110.7 yards per game on the ground to their opponents.

You can expect Philly to jump out to a lead through explosive plays in the first half. They will then switch to a grind it approach in the second half. It’s what they have done all season and will do again on Sunday. Sanders will be the beneficiary easily getting over the 59.5 and cashing our tickets.

Justin Fields (+100) – Name a hotter player right now than Justin Fields – you can’t. This guy is on a roll running the ball and gets one in this week against a porous Atlanta D.

Tyler Higbee (+310) – No Cooper Kupp means someone else must step up. Higbee is a good redzone target and a good value here.

Zach Pascal (+550) – The Eagles have been using this guy more and more, and without Dallas Goedert there are targets up for grabs. He’s explosive and it’s against his former team. Revenge Game!

Davante Adams (+110) – The Raiders are not good, but Adams is very good. He has scored in two straight games and will extend that to three this weekend.

Joe Mixon (-135) – Another week without Jamar Chase, and a divisional game. That means ground and pound and Mixon in the endzone.

Rhamondre Stevenson – 2+ Touchdowns (+650) – Stevenson is scoring twice this week. It’s a divisional game, it’s going to be cold, and the Pats don’t have receivers. He’s having a big day.