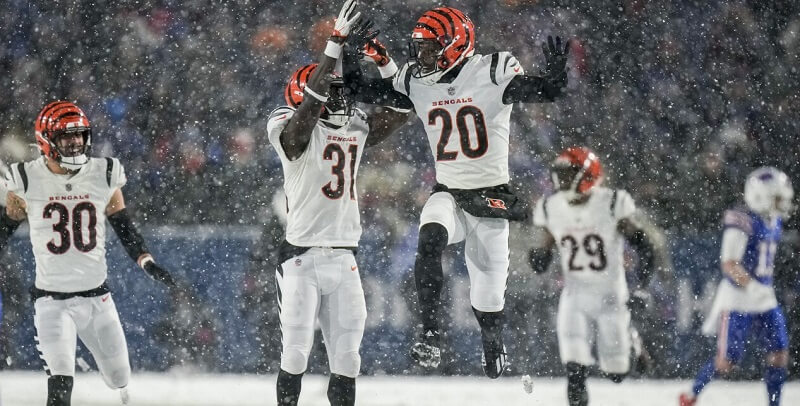 This week on Matt’s Take, an in depth review of the butt-kicking that took place in Buffalo last weekend. Additionally, Matt looks ahead to the coming weekends slate, and gives the best Bengals AFC championship odds. Also, an exclusive interview with Jake Fraley of the Cincinnati Reds.

Bengals Headed to the AFC Championship

In the words of Joe Burrow, all the ticket sites “better send those refunds,” as Cincinnati made a statement on Sunday against Buffalo. Cincinnati put on a near-perfect performance against Buffalo and showed the entire world they deserve more respect. After a 17-point victory for Cincinnati against the Bills and being undefeated against Mahomes, Cincinnati has a good chance of playing in the Super Bowl for the second straight season. This playoff run feels a lot different than last year though, as fans aren’t just content with a playoff win. This year is a true Super Bowl or bust season and for the first time in my life, I truly feel like Cincinnati is the best team in football and that Burrow will be holding the Lombardi Trophy on February 12th.

I can remember the frustration when the poor start to the season occurred, but this team has turned the 0-2 start completely around and they now have a 10-game win streak. Talk about a turn of events, right? This week, I felt as if all I listened to on ESPN was Josh Allen’s greatness, the potential matchup with Allen and Mahomes, and how our offensive line wouldn’t be able to “hold up.” After watching a stellar performance from the offensive line, I think Frank Pollack deserves some huge praise and it is more than time for those to include Joe Burrow in the top quarterback discussions. If Burrow takes down Mahomes for a fourth time, the torch has officially been passed on.

Hold on tight Bengals fans, as it is time to take down Mahomes yet again. 6:30 PM on Sunday evening is when the game will take place, so get your P.T.O. days scheduled for Monday and grab your cigars, as we have an AFC Championship to win. Who Dey!

Cincinnati Reds outfielder, Jake Fraley kindly joined Matt’s Take this week. Jake was a bright spot in the lineup during the end of last season and many looks for Jake to be a leader for this ball club in 2023.  Jake came to Cincinnati along with Justin Dunn, Brandon Williamson, and Connor Phillips in exchange for Eugenio Suarez and Jesse Winker. Since joining, Jake has made a huge impact in Cincinnati, and he looks to continue that during the upcoming season. Jake has even stated on Twitter, “I do feel right at home. I love Cincinnati and I love that this is the city I’ve found my love for the game again with.” I think I can speak for all of Cincinnati when I state that Cincinnati welcomes Jake with open arms and wants him around for a long time. While Jake dealt with an injury last season, after returning he truly “mashed” as the season came to an end. In 199 plate appearances after coming back to the field, Jake averaged .295 along with 18 extra base hits and an 11.1 BB%. I can’t wait to watch the electrifying left hander bring excitement back to Great American Ball Park in 2023.

A: “My goal is to do as much as I can on the mental side. I am focusing on discipline, such as remaining on-task and the daily process. Attacking my daily execution and remaining locked in and focused day to day for 162 games is my goal. I’m focused on one day at a time, 162 times.”

Q: What has been your favorite moment of your time in Cincinnati so far?

A: “On occasions last season, you could see at sporadic times the feeling of Cincinnati baseball. The fans here love baseball and I could feel that during last season.”

Q: What is one piece of your game that you are working to improve this off-season?

A: “I am dialed in with arm strength and I am working to clean up some unneeded movements. I am working on getting out of my comfort zone and embracing fear face-to-face. I am really focusing on the mental side of the game.”

Q: What does this team need to do to contend in the division?

A: “Getting away from social media and opinions of others with negativity towards the roster. We have a solid team up and down the lineup and health plays a big factor. As a team, we need to understand what it takes and remain disciplined throughout the season.”

Q: Who in the clubhouse is the best to turn to when looking for advice?

A: “Last year it was Kyle Farmer, but you can’t go wrong with going to Votto. Hall of Fame career and he didn’t get there by accident.”