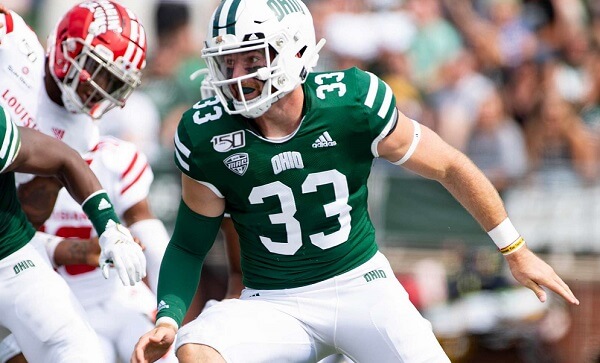 Another winning week for the MAC Daddy in the toughest ATS conference out there! We now have one full slate of MACtion left before the championship game at Ford Field in Detroit. Toledo clinched the MAC West, but there are still questions as to who the Rockets will be squaring off against. Several teams like Buffalo and Miami of Ohio fighting for bowl eligibility in the final week of the season. There is sure to be plenty of fireworks in the Mid-American conference in the final week. Here are your week 13 MAC odds, picks, and game previews.

Despite reports that quarterback Brett Gabbert would return in week 12, the RedHawks went with Aveon Smith against Northern Illinois. They didn’t miss a beat, as Smith threw for two touchdowns and ran for 105 yards in a 29-23 win. On the other side, the Ball State Cardinals were competitive, but ultimately fell to Ohio by a 32-18 score. During the game, Ball State lost star running back Carson Steele, as well as wide receiver Jayshon Jackson. Those mid-game losses made things difficult against an adept Ohio offense.

While Miami doesn’t always put up the most points, they find themselves competitive in every game they play. Regardless of who leads their offense, the RedHawks have displayed an ability to deal with adversity and manipulate their offensive gameplan as needed. Despite all the challenges they have faced this year, they return home for their final game with possible bowl eligibility.

The aspect that will make this game so exciting is that the Cardinals are also fighting for a bowl spot in this one. Expect a hard-fought battle, with not a lot of points scored. Ball State hasn’t eclipsed the 30-point mark in their last six games. Additionally, Miami is averaging just over 20 points per game of their own. The MAC Daddy remains confident in the RedHawks ability to adjust in the face of adversity. They will use this along with home field advantage to beat a team that on paper, they are better than. Expect Aveon Smith will win this game with his legs.

If there’s one thing to say about Ohio, it’s that their offense is dangerous. The Bobcats have had an-almost miracle season, being led to an 8-3 record behind the arm of “The Maple Missile,” Kurtis Rourke. Rourke was playing an awesome first half last week when he was speared in the knee, causing him to be carried off the field. It is not yet known if Rourke will play this week against Bowling Green. The Bobcats are keeping their cards close to their chest with the MAC Championship on the line. There is a good chance that nobody will know Rourke’s status until gametime, which will drastically affect the outcome of the biggest game in the MAC this year. Bowling Green can take Ohio’s place in the MAC Championship with a win here, making this game seismic in magnitude. Bowling Green upset Toledo in shocking fashion last week and have won five of their last seven games.

Whether Rourke is healthy or not, expect Ohio to lean on the running game this week. A unit that’s anchored by Sieh Bangura, who ran for 150 yards and two touchdowns last week against Ball State. Bowling Green on the other hand, will be banking on the pass. Matt McDonald is having a career year and is going up against an abysmal Ohio secondary. Bowling Green and Ohio both have 26 passing touchdowns going into this week, which rank third nationally.

This game should be high-scoring, but the possible absence of Rourke makes the MAC Daddy weary of taking the ‘Over’. Bowling Green will be able to keep this close and may potentially win outright. If the spread goes to BGSU +7.5 or beyond the MAC Daddy will be hammering the Falcons.

Central Michigan opened as underdogs, but quickly became favorites against the Eagles of Eastern Michigan. Central Michigan lost 12-10 in a snow game against Western Michigan last week. The conditions were so awful, it was hard to take anything away from this game besides the fact that nobody could move the ball due to the blizzard.

Eastern Michigan has won three of their last four and have already clinched a trip to a December bowl game. No matter who the Eagles face, there is no doubt that Eastern Michigan will play in a close game. They seem to be the epitome of “playing to the level of your opponent”, and that could spell trouble in their last game of the season.

While the Chippewas haven’t had the season they were hoping for, they’ve still shown that they can compete with anyone. At least anyone in the Mid-American Conference – this is highlighted by a win over Buffalo just two weeks ago. They have a balanced offensive attack and have stopped turning the ball over recently, which had been their Achilles heel. Eastern Michigan has had one of the better seasons in the MAC this year. However, they don’t necessarily have a lot to play for in this spot. Especially since they have already cemented their status as bowl-goers.

The Chips have placed an emphasis on taking care of the football, which means fewer risks. This leads to a more ground-and-pound style football. Expect an ‘Under’ here between two teams that don’t have much to play for at this point in the season.

Bonus: Ypsilanti, Michigan (where EMU is located) is calling for showers this upcoming weekend. Take the under.

Kent State fell to Eastern Michigan by a 31-24 tally last weekend. The Zips led by 10 at half, but couldn’t muster anything in the second half. They now sit at 4-7 on the season. They will travel to Buffalo to face the Bulls, who are seeking bowl eligibility in this season finale. Buffalo had to cancel their game last week versus Akron due to weather. However, they dropped their previous two games to Central Michigan and Ohio. Before their losing streak, the MAC Daddy was convinced that the Bulls were the team to beat in the conference. They still have plenty to play for with a postseason game at the front of their minds.

Buffalo has both the talent and motivation to win this game in a convincing fashion. Whether they can execute will be a different story, but all signs point to a Bulls victory this weekend. The Golden Flashes are an atrocious 1-5 on the road this season. They haven’t been a complete team since much earlier in the season. One interesting trend here is that the favorite has won five of the last six meetings between these two teams. Even with potential weather issues, the MAC Daddy feels confident in playing the Bulls up to a touchdown.