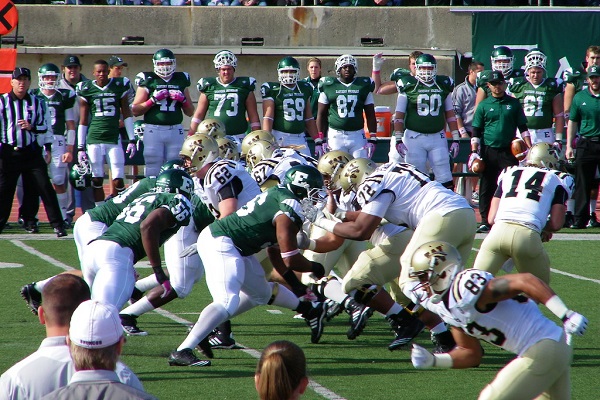 College football week 4 is here, and with it, some excellent matchups in everyone’s favorite division: the MAC. The resident MAC expert, MAC Daddy, is back with his Mac Week 4 picks. These are the top college football games, with the best betting value, around the division. Let’s dive in.

The Eagles of Eastern Michigan are looking for vengeance after losing the last time these two teams played in 2019. Buffalo is about as bad as they have looked in recent memory, losing each of their first 3 games. More importantly, they have lost each of their two road games by an average of 21.5 points. Their other loss came to FCS school Holy Cross at home!

Georgia is running for best team in the land once again this season, outscoring opponents 130-10 through 3 games. Two of these three games were against legitimate opponents in Oregon and South Carolina.

Kent State started the year with a 1-2 record against some tough opponents in Washington and Oklahoma. The Golden Flashes are allowing 420 yards per game on defense, while Georgia is boasting an insane 532 YPG. Georgia’s defense has been dominant against their competition, allowing an average of 3.3 points over their first three games. This discrepancy alone is enough to make me want to hammer the Bulldogs spread at almost any number.

If the Bulldogs can blow fellow SEC opponents out of the water, expect much of the same, and then some, against a less than .500 MAC team.

The Cardinals of Ball State will have their hands full when they travel to Georgia Southern this weekend. Ball State has beaten D-2 Murray State this season while dropping games to Tennessee and fellow MAC member Western Michigan. Georgia Southern comes into this one with a 2-1 record, highlighted by a 45-42 win at Nebraska last week. The Eagles of Georgia Southern are led by senior quarterback Kan Vantrease. He should have relative ease spreading the ball around to his playmakers this weekend.

Georgia Southern is the more impressive team on paper but they may be susceptible to the “hangover” effect. We could see this after they won a huge game for their program last week over a Power 5 team.

Ball State has not done many impressive things yet this year, but they did play a close game against Western Michigan, a strong in-conference opponent. I will take the Cardinals with the points here to at least keep things close. One interesting betting trend is that the total has gone under in 13 of Ball State’s last 19 contests.

San Jose State did not play a game last week but fell to Auburn 24-16 in their previous game. In week 1, San Jose narrowly squeaked out a 21-17-win vs Portland State. SJSU is a dismal 1-4 ATS in their last five non-conference games. Western Michigan is coming off a tough 21 point-loss to Pittsburgh in a game where they kept it close until the start of the 4th quarter. Both teams have had their ups and downs this season already, which should make for a very intriguing matchup.

Western Michigan was only able to muster 180 total yards last week. On the other side, San Jose State is coming off an open week. Therefore, the line has moved significantly in favor of the Spartans since the lines were released. I will be taking Western Michigan with the points. There is a chance that the line continues to move in favor of SJSU.

The Broncos have been largely outmatched in 2 of their 3 games this year, and this is a good get-back spot for them. While it may be hard for Western Michigan to win this MAC week 4 game on the road, it will be a closely contested battle.