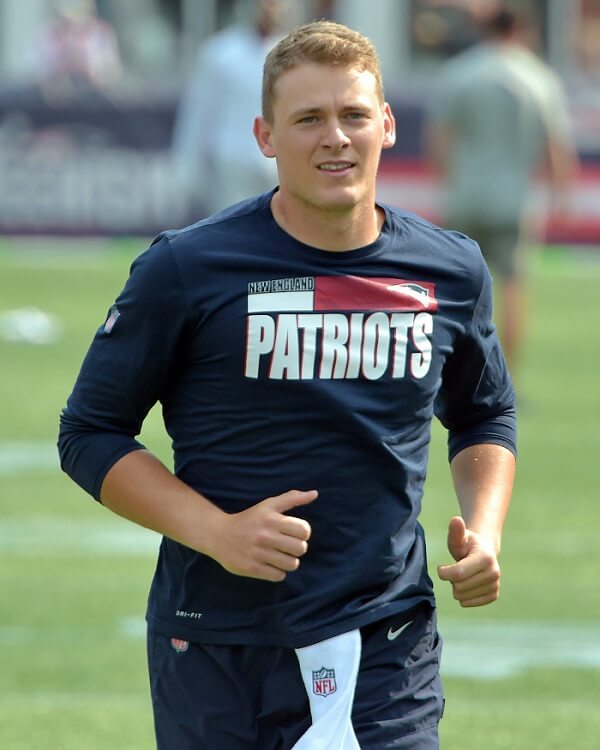 The New England Patriots drafted quarterback Mac Jones in the first round of the 2021 draft to be the true heir apparent to legend and all-time GOAT Tom Brady. In year one, Jones showed a lot of potential, and he looks ready to take on an even bigger role this season. Breaking down what Mac Jones needs to take a leap plus Mac Jones player props for the 2022 season.

Here’s what to expect from Mac Jones in year 2.

How Did Jones Perform in His Rookie Campaign?

Last year, Mac Jones had an impressive rookie season with the New England Patriots. He played in all 17 regular season games after beating Cam Newton for the starting spot in camp. Jones completed 352 of his 521 pass attempts (67.6%) for 3,801 yards and 22 touchdowns. His quarterback rating was 92.5.

Jones showed poise and accuracy in the pocket and made some big throws when the Patriots needed them most. He also displayed good decision-making, avoiding a lot of turnovers which seem to plague many rookie quarterbacks.

While the Patriot’s offense did struggle at times last season, Jones showed some flashes of being a true franchise QB. He should only get better in his second year and be a key piece of the puzzle as the Patriots look to return to the playoffs.

Mac Jones is known for his hard work ethic, and this offseason was no different. The Patriots quarterback slimmed down and put on muscle to improve his conditioning.

This will help Jones be even more prepared for the rigors of the NFL season and will ultimately pay off on the field. Jones has the potential to be the most accurate quarterback in the league. If he can improve his mobility, he can be even better in his sophomore campaign.

The Patriots expect big things from Jones this season, and he looks poised to deliver.

In the offseason, Josh McDaniels departed as offensive coordinator for the Patriots to become the head coach in Vegas. This left a vacancy on the Patriot’s staff, which Matt Patricia has seemed to fill.

Patricia was the defensive coordinator from 2012-2017 and helped the Patriots win two Super Bowls in that span. He will now be responsible for leading the team’s offense.

How will he adjust to making offensive play calls, and what will his relationship be with Jones? That’s a big question heading into 2022, and it will be interesting to see how that dynamic will work.

The Patriots will likely continue to run a balanced offense that relies heavily on short-intermediate passes and power running. The running back talent last year far outweighed the wide receiver talent on the roster. To correct this, the Patriots traded for all-star caliber DeVante Parker in the offseason. They still don’t have the same level of talent at wide receiver as they do at running back. However, they do have several talented pass-catchers, including Jacobi Meyers, Nelson Agholor, Kendrick Bourne, and DeVante Parker.

It’s also worth noting that the Patriots have several young players who could develop into key contributors on offense. A guy to look out for is second-round pick Tyquan Thornton who adds an element of speed to the offense. At the NFL combine, Thornton ran a 4.21 40-yard dash – one of the all-time fastest in the events history.

The Patriots have a stable of running backs that will absolutely help Mac Jones and the offense in 2022. Rhamondre Stevenson, Damien Harris, and Pierre Strong are all hard runners who can run between the tackles and catch passes out of the backfield. This group will be able to keep the chains moving and give Jones some options in the passing game.

The Patriots also have a good offensive line to help open holes for these running backs. Adding first-round pick, Cole Strange will help solidify the line with some young talent up front.

Will Mac Make a Big Leap in Year Two?

The answer to that question depends on what Jones ceiling is, and how much help he has around him.

There’s no doubt that Jones is a very talented young quarterback. He was extremely accurate as a rookie, completing 67.6 percent of his passes for 3,801 yards and 22 touchdowns. He also showed good poise and decision-making, especially for a player who was just drafted 15th overall out of Alabama.

But there are still areas where Jones can improve. His biggest issues as a rookie included his footwork, offensive familiarity, conditioning, and reading NFL defenses. These issues can be fixed with more experience and time with the Patriots coaching staff and teammates. It’s already a good sign that Jones slimmed down to help his conditioning through a long NFL schedule.

If Jones can continue to correct these issues and get more help around him, there’s no reason to think he can’t take another big step forward in his second season.

This season I want to see Mac take more of a leadership role and truly take command of the offense. While this may seem like a tall order for a second-year talent, he has all the abilities to be a guy you want to build around.

I’m not expecting an MVP year or anything, but just notable improvements as we look towards the pivotal year 3. That year 3 always seems to be the make-or-break year for young signal callers. That’s the year where you can tell if they truly are the franchise guy.

Ultimately, I believe Mac will rise to the occasion.