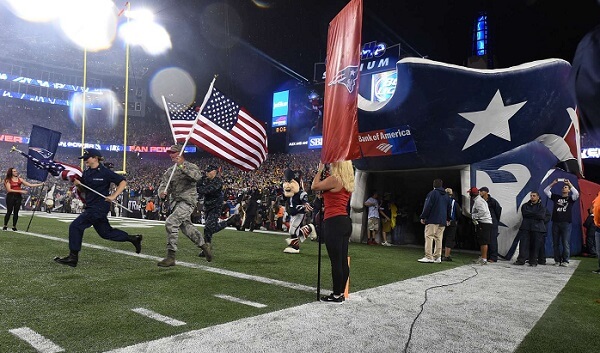 The New England Patriots and New York Jets are coming off their bye week for a crucial divisional game Sunday afternoon in Foxboro. The Jets enter at 6-3 in second place, while New England is at 5-4, currently in last place. However, still in playoff position in the AFC. Here is what you can expect from this game, continue reading for the full Jets at Patriots preview.

The Jets came into their week nine matchup against the Bills as big underdogs. However, their defense proved that it’s one of the best, shutting the potent Bills offense out in the second half. The result was gang green squeaking by with a 20-17 shocking victory at home.

This win was a massive boost for the Jets, who are now firmly in contention to win the division. It was also a big blow to the Bills, who had been the clear frontrunners in the AFC East.

The New England Patriots had a dominating 26-3 win against the Indianapolis Colts in week nine. In fact, it was so dominating that head coach Frank Reich was let go the following morning.

The Colts second-year quarterback Sam Ehlinger suffered the same fate as Zach Wilson the game before. Head Coach Bill Belichick was able to confuse the young signal caller all afternoon.

The game on Sunday will be televised nationally on CBS, with kickoff set for 1:00 pm ET. Kevin Harlan, Trent Green, and sideline reporter Melanie Collins will be on the call. You can listen to the game locally on 98.5, The Sports Hub in Boston.

Patriots’ Defense: The Patriots had Zach Wilson seeing ghosts when they faced off two weeks ago. Expect a similar game plan from New England. They will take away the running game and force Zach Wilson to throw the ball. Matthew Judon will be looking to add to his league-leading 11.5 sacks.

Rhamondre Stevenson: Even against a top defense like the Jets, Stevenson has become a must-start. He undoubtedly will be heavily involved in the Patriots offense and receive a high volume of touches. Also, expect catches out of the backfield, adding to his PPR value.

Quarterbacks: Don’t expect much from either of the second-year quarterbacks on Sunday. Their main goal will be avoiding turnovers and giving the opponent a short field when points will be at a premium.

James Robinson: Bill Belichick will stack the box and force Zach Wilson to throw the ball, exactly what they did two weeks ago. Robinson should receive more of a workload coming off the bye week and being more familiar with the playbook. However, don’t expect any big numbers against the stout Patriots front.

This will be a battle between the two defenses, in an overall low scoring affair. The expectations from the quarterbacks are low but if either one plays above average, it will change the entire complexion of the game.

From a betting perspective, there isn’t much value in taking the Pats moneyline unless you parlay it with another favorite. Laying the points is the best play in this game for the value. Not to mention, Belichik is notorious for having his team ready coming off a bye.