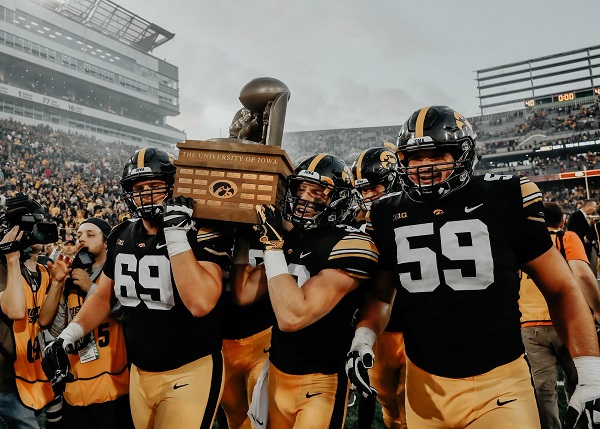 Michigan will travel to Iowa this week in a game that has upset written all over it. Michigan is the #4 ranked college football team in the country, but they still have a lot of people to convince. They don’t look like a team capable of keeping up with the Alabama’s and the Georgia’s of the world. This Saturday they’ll head into a hostile environment down in Iowa City to take on an Iowa Hawkeye team led by Spencer Petras. This is our Week 5 CFB upset warning.

We’re still looking for our first win on the upset of the week articles. We took Nebraska in Week 3, in what turned out to be one of the more embarrassing performances in program history for the Cornhuskers. Last week we took Florida, who played tough until the very end, but ultimately weren’t able to outlast Tennessee.

Let’s dive into Week 5’s upset of the week to see why Iowa can break the trend and take down the mighty Wolverines.

It seems like every year Iowa is involved in one of these. Hawkeye fans will never forget when the team took down a #3 ranked Michigan team at home in 2016. Only moments after Keith Duncan nailed the 33-yard game-winning field goal did the field become a sea of black and gold. Kinnick Stadium can hold 70,000 people, and it’s unlikely Jim Harbaugh’s offense will be able to communicate with each other on the field on Saturday.

JJ McCarthy will be taking snaps under center for Michigan. The sophomore quarterback resembles what many in the football world refer to as a game manager. He’ll take care of the football, but is unlikely to wow you.

Iowa has been stagnant all year on offense but showed encouraging signs in their 27-10 win over Rutgers on Saturday. It was Iowa’s first win in conference play. They will now prepare for a much bigger test in Week 5.

Senior quarterback Spencer Petras has had a rough go of it to begin his 2022 campaign. He will have a chance to redeem himself with a good performance this Saturday. Petras is going to have to find a way to get Arland Bruce IV the ball more. Bruce, a sophomore, is Iowa’s top wideout this year. Tight end Sam Laporta leads the team in catches and receiving yards this year. He’ll have to make a big impact on Saturday as well.

Iowa’s defense has looked phenomenal this year. They’ve been able to stop the run and quarterbacks are having a hard time against them too. They’ve forced 7 turnovers in 4 games, including 3 that have come from Cooper DeJaun Ints. Their pass rush has been impressive. The Iowa defense has sacked the quarterback 12 times this year.

Granted Iowa has yet to play a team as talented as Michigan, but the defensive energy will carry over to this Saturday’s contest. We can expect head coach Jim Harbaugh to go with a balanced attack to begin the game. If Iowa’s defense is able to stop Corum the way they’ve stopped other teams’ running backs, Harbaugh will be forced to put the game in the hands of J.J. McCarthy.

If this game is high scoring Iowa won’t be able to hang around. The Hawkeyes want this thing to be a defensive slugfest, which is what we’re going to get.

The game will begin with each offense struggling to find a rhythm. J.J. McCarthy will be the first one to get things going after connecting with Ronnie Bell for a big gain towards the end of the first quarter. The Michigan offense is forced to settle for a field goal, and that’s where the score will stand as we head to the second quarter.

The Hawkeyes decide to turn to the run game and are finally able to have success. It’s the freshman Kaleb Johnson that finds a big hole to take Iowa into Michigan territory. He follows this up with a 15-yard run to put his team in business. A few plays later Petras finds Sam Laporta wide open in the endzone to give Iowa the lead.

Michigan is forced to punt on the next possession, but an interception from Petras puts the Wolverines on the Iowa doorstep. The Iowa defense is able to stand them up, forcing Michigan to settle for another field goal. Neither offense is able to put much together the rest of the quarter, so we head to the half with Iowa leading Michigan 7-6.

The second half continues as a defensive showdown until Michigan’s offense puts something together midway through the third. Blake Corum finds a rhythm but a holding penalty kills the drive and Michigan is forced to settle for another field goal.

Petras finally answers the call late in the third after Michigan take the lead. He leads his team on a long drive. Iowa gets stopped on the goal line at the beginning of the fourth quarter, leaving head coach Kirk Ferentz with a big decision to make. Ferentz elects to settle for 3, giving his team a 1-point lead.

With 6 minutes remaining in the fourth Corum breaks through for a big run to take his team to midfield. On the very next play Michigan breaks through, as McCarthy hits his guy Roman Wilson in the endzone for a touchdown. The two point conversion attempt is broken up, so the Michigan lead remains at 5 with 5 minutes to go.

The Hawkeyes need Petras to step up on their next possession, and that he does. After converting on a couple big third downs, including one on a 10 yard scramble from Petras, Iowa is now in Michigan territory. Leshon Williams then breaks off his biggest run of the season to bring his team inside the 10, as the clock ticks under two minutes. On third down, Petras dumps it off to Williams who powers through for the score. Iowa isn’t able to convert the 2 point conversion but they lead by 1 with 43 seconds left.

Michigan doesn’t have much time remaining and must force the ball down field. On the second play of the drive McCarthy does just that, and the ball is tipped up in the air and lands in the arms of a Hawkeye defender. The game is sealed. Iowa knocks off the #4 ranked team in the land.

The field is once again a sea of black and gold. Feels like 2016 again.