On The Docket: The Judge’s College Football Week 5 Picks 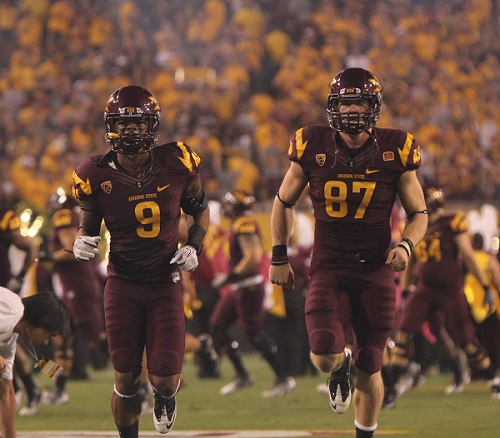 Depending on who you pull for, you may have a few more gray hairs after Week 4. We saw several top-ranked teams just struggling to survive against lesser opponents. Maryland would not go away in the Big House against Michigan. Kansas State went to Norman and knocked off the Sooners. Kent State made its game against Georgia way more interesting than anyone in Athens cared for it to be. We also see the emergence of some teams that have a chance to have a fantastic year. Minnesota put a beatdown on Michigan State and Kansas stands 4-0. Let’s look ahead to some Week 5 College Football Picks.

Along with Week 5 returns some of the games we probably don’t appreciate as much as we should. These are the conference games we have just come to expect every year. These late-September/early-October games are turning points in teams’ respective seasons, leading the way to conference title contention, or possibly leading the way to a coaching search in the offseason. This is prime college football season. Take advantage of it while it’s here and earn some cold, hard cash.

Here are your Week 5 College Football Picks. Court is once again in session.

The way Illinois is playing is eerily reminiscent of what we’ve come to expect from Wisconsin over the years. The reason why is obvious—Bret Bielema. The former Badgers coach brings his Illinois team back to where he made his name, with the intent of making 80,000 fans wish he was still there.

This game is going to be a war of attrition and might set football back a good 50 years. Don’t expect a ton of points from these two. Wisconsin is certainly the better team here, doing what Illinois does but just a little better. However, in a grind of a game, give me the points. Illinois scores enough and runs enough clock to keep the visitors within an arm’s reach in this one.

The SEC will have at least one less undefeated after this Week 5 matchup between Ole Miss and Kentucky. Each team has faced a slew of lesser, with Kentucky playing the lone challenging game, getting a win at Florida. This will be Ole Miss’ first test of the season.

Ole Miss has not exactly been on fire to start the season, having rather uncomfortable wins against Troy and Tulsa. While Kentucky hasn’t exactly bulldozed everyone on its schedule, we know the tangible value of getting a win in Gainesville. Giving that team 7 points is too much.

TCU is coming into this game going 3-0 in their non-conference slate. Oklahoma is coming off a puzzling loss to Kansas State, exposing Brent Venables’ defense for the first time this season. This should concern the Sooners as TCU, under first-year head coach Sonny Dykes, is averaging 46 points per game. The operative word there is concern, not panic.

The good news for the Sooners is that the offense continues to click behind quarterback Dillon Gabriel. The other bit of good news is that Oklahoma has traditionally had success against the Horned Frogs, winning 10 of 11 since 2012. What does that have to do with this game? Well, it means Sonny Dykes likely needs more than 3 games to change the trajectory of the program. The Judge chooses to believe the Sooner defensive performance against Kansas State was a blip, not a bump. Oklahoma cruises in this one.

This is The Judge’s game of the week. Both Wake Forest and Florida State have gotten some well-deserved love lately. Wake has been an example of program-building under Dave Clawson and is a real contender for the ACC. Florida State has shown us that you are still allowed to give a new head coach time to turn things around and captivated us with their win over LSU in Week 2.

There are several factors to weigh here. Wake Forest is coming off an emotional double-overtime loss against Clemson. This could cause a hangover effect or be a point of confidence that the Demon Deacons can play with anyone. The state of Florida is going through hell right now with Hurricane Ian. This could be a source of distraction or a rallying point. The Judge likes to think these types of things come out in the wash.

Texas A&M rolls to Starkville after two top-15 wins looking to make Mississippi State the next victim of its redemption tour. If you look at scores and matchups getting ready for this game, that is what you will see. It’s easy to let your eyes deceive you—on paper Texas A&M looks the favorite to win this game. As Coach Saban would say, don’t eat the rat poison.

This game is about taking value and Texas A&M is incredibly overvalued. We all know about their loss to Appalachian State. That is just where this story begins. The Aggies followed up that loss with a 17-9 win over a bad, and I mean losing to Middle Tennessee by two touchdowns bad, Miami team. Then the Aggies needed an 82-yard fumble return for a touchdown and a missed field goal to beat Arkansas. Could the Aggies be peeking ahead to the Alabama game? All signs point to Mississippi State.

Fires, earthquakes, whistles, clocks, you name it.  Crazy shit happens when these two teams find themselves on the same field. The Judge will be blunt—these teams aren’t very good, and that is an understatement as it pertains to Auburn. What that means for us is the volatility is raised and we can expect to see even wilder shit. This game will be so bad that it’s good.

The Judge cannot predict what exactly to expect out of Auburn. They may pull some rabbits out of the hat being at home for a night game, cause some turnovers and find a way to keep it close. However, Auburn is not going to score much on their own volition. On the other side, the Auburn defense is good enough to keep LSU in check.

Take the under and take in the magic.

USC is coming off a close one in Corvallis in Week 4. However, this game is less about the PAC-12 favorite and more about Arizona State. They’ve become a circus over the last few weeks after the firing of Herm Edwards. After his firing, reports came out accusing assistants of sabotaging Edwards so that he would get fired. Whether that has merit or not has not been brought before this court. However, The Judge can tell you that kind of talk is not good for a locker room.

Don’t plan on the Sun Devils to suddenly get it together. Live a little and lay the points.

This is a good game to bet to round off a solid day of college football. Navy finds it difficult to score and won’t find it any easier against Air Force.

UConn loves to give up points and this Fresno State team would love to take advantage of that. Don’t expect the Bulldogs to take their foot off the gas.