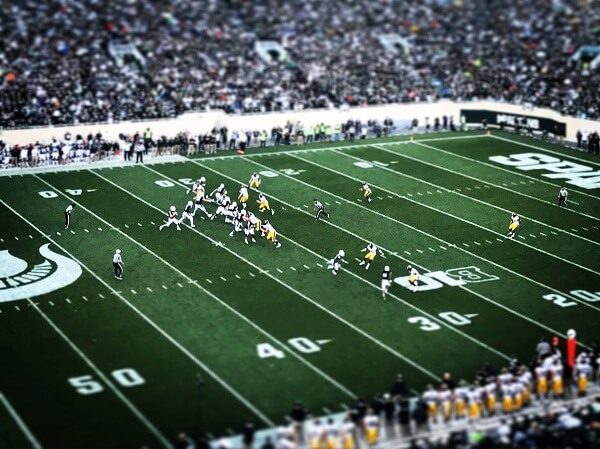 Week 2 was wild, eh? A weak slate brought chaos, as we saw many ranked teams fail to cover against lesser opponents. A few of them even lost outright.

It is not abnormal for many teams to look great in Week 1 and look putrid in Week 2, or vice versa. Just like a bench trial, it is up to this honorable court to make a determination of fact for who is real, who is fake, and where the value is in this Week 3 board.

Don’t get swept into overreactions but trust your eyes. Now that we have a little bit of meat on the bone, let’s dive in.

Here are your College Football Week 3 Picks. Court is once again in session.

This line is a bit puzzling. Already well documented here, Nebraska fired Scott Frost following their 45-42 loss to Georgia Southern. The line suggests that the Cornhuskers will respond positively to the change and be able to score enough points to keep up with Oklahoma. Starting at -17, the spread was driven down by early bettors to -13.5, and now sits at -11. This game comes down to whether Oklahoma’s defense can get stops.

Nebraska, who put up 31, 38, and 42 points in their three games, lost a critical component of their offense with Frost. To boot, the Cornhuskers have not faced a defense as formidable as the Sooners’. Their defense has only given up 16 points on the season.

Count on Oklahoma to win comfortably here, and if you’re feeling froggy, sprinkle a bit on the under of 66.

How much do you believe in this Michigan team? Through two weeks, we’ve seen some top-10 teams look like they don’t even belong in the top-25 (yes, you, Oregon, and Notre Dame). Is Michigan, who has yet to be tested, one of those teams? The answer is a resounding no. That’s important here, as the Wolverines will be shouldering the burden to push us over the point total early.

The Michigan totals in their first two games have gone under, but by a narrow 3 points combined. The Huskies are coming off a 48-14 blowout loss to Syracuse. Michigan will do its part in the points department, but can UConn score enough? 14 of the 17 points the Wolverines have given up have come in the 4th quarter.

Count on the Huskies to get enough late if they are unsuccessful early.

Give me a “B”!  Give me a “-lowout”! What’s that spell?… Blowout, ladies, and gentlemen. Georgia Tech is 1-1 on the season with a 41-10 loss to Clemson and a 35-17 win over Western Carolina. They failed to cover the spread by about 7 points in both contests. The Yellow Jackets are somehow being overvalued, even as one of the worst power 5 teams in college football.

The Ramblin’ Wreck are just that – a wreck, having given up 31 plays of 10 or more yards. I’m don’t need to tell you whether that bodes well against a Lane Kiffin offense averaging 6.6 yards per play. It doesn’t bode well. Lay the points here, folks.

This is an incredibly important game for BYU. Win and they are on a tear towards a 10, 11, or 12-win season. The Cougars are coming off a 26-20 home win over #9 Baylor and will be looking to snatch a road win in Eugene against an Oregon team hanging on to a top-25 ranking by a thread. The Cougars have the team to do it.

We saw what Oregon is in Week 1 against Georgia. While BYU is not Georgia, Oregon is not close to the team pollsters anticipated. BYU will rely on its run game to gash a weak rushing defense from the Ducks. This is a defense that gave up five yards per carry to Georgia. Trust your eyes, fade Oregon, and enjoy the positive odds on this money line play.

If you want to play it safer, take BYU +3.5, but there is tremendous value in the money line.

This line has moved from 10 to 8.5 as the week has progressed. The key to this game will be whether Houston can get enough stops against this Jayhawk offense. Kansas put up 56 and 55 points in their first two games and is the highest scoring offense in the country. The short answer is no.

Expect a competitive game in Houston between these two. In its first two games, Houston has gone to triple and double overtime. Even in Week 3, that kind of effort takes a toll on a team. Add in that this is not the same doormat Kansas team we have seen in years past. 8.5 points is too high. Rock Chalk.

This SEC matchup is one of the more underrated ones if you ask The Judge. You can’t ask for much more than two gritty programs who will duke it out on a Louisiana Saturday night in Week 3.

LSU was the losing party to an all-time classic in New Orleans against Florida State. On the other side, Mississippi State has handled business against two decent opponents in Memphis and Arizona.

This is another game The Judge recommends that you use your eyes. LSU looked entirely unimpressive against Florida State in Week 1, needing scores late to tighten the ballgame. On the other hand, Mississippi State looked comfortable and competent in a revenge win over Memphis and a road win in Tucson.

The spread suggests that Mississippi State would be closer to a touchdown favorite on a neutral field. In games like this, the better team usually wins.

Pitt will be taking an interesting road trip to Kalamazoo, Michigan to take on the Broncos of Western Michigan. Western Michigan sits 1-1 with a 35-13 loss to Michigan State and a 37-30 come-from-behind win against Ball State. Pitt is 1-1 with a win over West Virginia and a loss to Tennessee. Broncos faithful will be excited that a ranked team is rolling in, but Pitt will be too much to handle.

The Panthers will not be taking this one lightly after losing to the Broncos at home last season. This is a very different Western Michigan team, however, as many of those key parts are now gone. Count on Pitt to handle the lesser opposition and score enough points to put this one away. Buy this one down to 10 if you can.

The Huskies are 2-0 behind studly performances by transfer quarterback Michael Penix Jr. The opponents, however, were Kent State and Portland State. Michigan State is also 2-0, winning those by a combined 74 points. Those opponents? Western Michigan and Akron. This will be the first test for both teams as the Spartans travel to Seattle.

The kicker for this Saturday evening match will be the Spartan defense. They return three of its four defensive backs to stymie the Washington air attack led by Penix. Count on Michigan State to control the ball and steal a road win. Take a look at the money line as well.