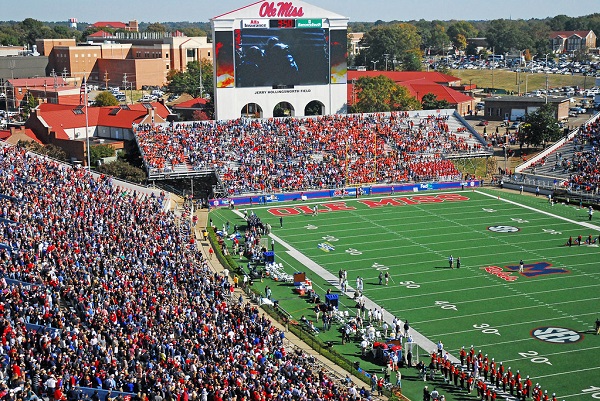 Welcome to Twelve in the Box. Here, you will see twelve teams making the biggest impact on college football. Is this a ranking? Not really—you won’t find any numbers by the team names. Is this a power ranking? Sort of, kind of. The Judge, here, will use his arbitrary sliding scale of indiscriminate factors to present the twelve teams (and three alternates) that Your Honor thinks you need to be paying attention to. Let’s dive into this CFB Week 6 rankings of sorts.

Unlike in recent years, the gap separating the best football teams from the field is small this season. This was on full display as Arkansas stormed against Alabama, and Missouri had Georgia on the ropes. While the favorites went on to win those games, there was a competitiveness that has been missing in past years. If we learned anything from Week 5, it was that land mines can be anywhere on the schedule.

The Crimson Tide’s hopes of a national championship run ride on one man’s shoulders, or shoulder. Quarterback Bryce Young took an awkward fall in the second quarter of Alabama’s contest against Arkansas. The Heisman winner went to the medical tent and Young didn’t return to the game. Nick Saban has said that Young is “day-to-day,” but seeing Young back under center will assure Tide fans that Alabama can still make a run. Although backup Jalen Milroe performed well in his duties, Young is what makes this team go.

Next Game: vs. Texas A&M

Clemson has removed all doubt on who the team to beat in the ACC is this year. They’ve shown their stripes with a Week 4 road win over Wake Forest and Week 5 win against NC State. The Tiger defense redeemed itself against the Wolfpack, even with some key players out of the lineup. The Tigers are showing signs of getting things on track to make yet another playoff run.

While they still have a way to go, Clemson had marked improvement on the defense along with good quarterback play from DJ Uiagalelei’s. However, the Tigers cannot rest on their laurels. They go on the road two consecutive weeks for games at Boston College and Florida State.

Next Game: at Boston College

Ok, maybe there is reason to fret. The Bulldogs were down by two possessions to Missouri in the second half in Week 5. It looked like the home Tigers might be able to pull off the upset. Georgia needed a late touchdown to sneak past now 2-3 Missouri. This is two weeks in a row the Dawgs have failed to live up to their billing as the nation’s best team. Georgia will ultimately be judged on their season’s worth of work. However, they won’t have many more weeks where they can play to this current level. Luckily, the Bulldogs have two upcoming home games against a few of the conference’s worst teams.

Next Game: vs. Auburn

Kansas could not win another game this season and still have exceeded expectations. However, with a 5-0 start comes new expectations. This is reflected by College Gameday coming to Lawrence for the first time ever… for football. The Jayhawks enter the AP poll at 19, its first appearance since 2009. Lance Leipold’s squad is looking for more than just recognition, they want to shake up the Big 12. Kansas will certainly have that opportunity. Games against TCU, Oklahoma, Baylor, and Oklahoma State await Kansas in the next four weeks. Regardless of the outcomes, this team deserves all the hype and excitement for changing the trajectory of the program.

Next Game: vs. TCU

In a world of college football where lofty preseason rankings often prove meritless, Michigan has shown itself to be worthy. The best thing you can say about Michigan right now is that the Wolverines are not frauds. Michigan has taken care of business against some lesser teams and now against some solid teams. The question remains whether this Michigan team is for real, though. We may be a few weeks from finding that out. If Michigan can get through Penn State on October 15th, we’ll look at The Game for conference and playoff implications.

Next Game: at Indiana

Since its Week 1 showdown against Notre Dame, the Buckeyes have won each of its games by 30+ points. That’s good for a 5-0 record and winning each game by double digits. This season of college football has had more disruption at the top than we’ve seen in the past few years. Especially with Alabama and Georgia narrowly escaping games against lesser opponents.

What Ohio State has done and is doing should not be taken lightly. Like Michigan, if Ohio State can make it past Penn State, The Game will have major implications for the Buckeyes.

Next Game: at Michigan State

When you have two teams that deserve a mention but not a full feature and they make up one of the country’s best rivalries that takes place the following weekend, you throw them in together.

The Red River Showdown is on tap for Week 6 and both teams have some questions to answer. Will Texas quarterback Quinn Ewers be healthy for a return to the field? Is Oklahoma quarterback Dillon Gabriel able to play after sustaining a blow to the head in Week 5? After some fast starts, both Oklahoma and Texas have fallen flat the last two weeks. If there is ever a time to get the season back on track, it is right now.

Next Game: Oklahoma vs. Texas

The Cowboys returned from their Week 4 bye to win a statement game over a top-20 Baylor team. Before this game, Oklahoma State had yet to play a quality opponent. However, Mike Gundy’s team showed in week 5 that they are ready to compete for the Big 12. The Pokes recorded a kick return for a touchdown, forced a safety, and largely kept the Baylor offense in check. Oklahoma State certainly could be worse positioned in the Big 12 but will face a tough schedule ahead. They play conference games in nine consecutive weeks due to the early bye. This includes road trips to TCU, Kansas State, Kansas, and Oklahoma.

Next Game: vs. Texas Tech

Who would have guessed that the Ole Miss defense would be the difference-maker in its 22-19 win over Kentucky. They recorded a safety and recovered a forced fumble on Kentucky’s last drive to prevent the Wildcats from sending it to overtime or winning outright. Following the win, Lane Kiffin has the Rebels 5-0 for the first time since 2014, which was a good year. Looking ahead, Ole Miss has a very good opportunity to stretch their success to 7-0. They are going to Vanderbilt in Week 6 and hosting Auburn in Week 7. Kiffin shouldn’t have much of a problem with the number of butts in seats now.

Next Game: at Vanderbilt

The Trojans have officially won more games this season than they did their entire 2021 campaign. This goes to show how quickly a program can turn around with an infusion of a coaching staff and transfers. While the Trojans stand on a 5-0 record, the last few weeks have not exactly come easy. USC had to survive a Week 4 trip to Oregon State and the Week 5 game against lowly Arizona State was precariously close at halftime. USC will have another test coming in Week 6 as Washington State comes to town. The Trojans should not be caught looking ahead to their October 15th trip to Utah.

Next Game: vs. Washington State

Sonny Dykes and his TCU team are not playing around. In Week 5, the Horned Frogs opened conference play with a 55-24 drumming of Oklahoma. The TCU offense put up some video game numbers, racking up 668 yards. Quarterback Max Duggan threw for three touchdowns and ran for two more. While Kansas may be getting most of the attention in-conference, TCU is truly a contender to win the conference. Dykes may have been just the change the Horned Frogs needed to breathe life back into the program. The Frogs will center stage in Week 6 as they travel to play the Jayhawks with College Gameday in town.

Next Game: at Kansas

The Vols are seemingly coming out of their bye week more banged up than before. They will be without cornerback Warren Burrell for the remainder of the season. However, they are hopeful that receiver Cedric Tillman can return from ankle surgery for their Week 6 trip to LSU. Tennessee will need all the healthy bodies they can get. Four of their next five are against ranked opponents, including hosting Alabama and a trip to Athens to face Georgia. If they can get more production from their defense, they’ll have a chance to make a run over this stretch.

Next Game: at LSU