CFB Week 6 Game of the Week: TCU at Kansas 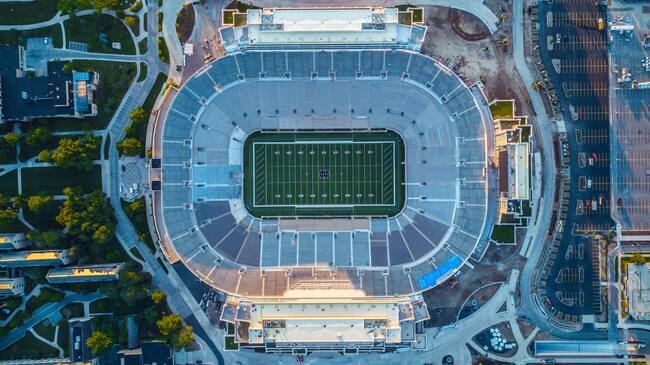 Our game of the week this week for college football would have seemed impossible just a year ago. It features TCU traveling to Lawrence to take on the Kansas Jayhawks led by Jalon Daniels. The Jayhawks have managed to start the season undefeated and they’ll be taking on a TCU team that has done the same. The game will be garnering national attention as College Gameday will be on site. Kansas already has its most wins in a season since 2008, and if they win another they will become bowl eligible for the first time since that same year. Let’s dive into this full TCU at Kansas preview.

Kansas football’s unprecedented start to their 2022 campaign has featured some big wins, but none over ranked opponents. TCU, who are led by Max Duggan at quarterback, will be the first one they face. It hasn’t been all Daniels for the Jayhawks. Their running game has been effective thus far. Kansas is 31st in the nation in rushing yards. The duo of Devin Neal and Daniel Hishaw Jr. have each gotten it done in the backfield.

Despite how effective Kansas’ running backs have been, it’s still Jalon Daniels who has been the star. Through the team’s first 5 games, Daniels has completed 68 percent of his passes, and thrown for 11 touchdowns and only 1 INT. As a dual-threat quarterback, Daniels is also able to get it done in the running game. He’s just 4 yards short of the team lead in rushing yards and is always a threat to break a big one if he doesn’t like what he sees downfield. On Saturday, Daniels will need to have a big game if the Jayhawks are going to keep up. TCU ranks third in the country in points per game, averaging 48.5.

Quarterback Max Duggan has been sensational under center for the Horned Frogs this year. Duggan was not the starter to begin the year, but an injury to Chandler Morris forced him into action late in the team’s season opener. In each of the 3 games Duggan’s started this year he’s thrown for at least 275 yards and 3 touchdowns. On the year, Duggan has 11 touchdowns and has yet to throw a pick.

Kendre Miller has averaged 7.6 yards a carry for TCU this year. He’s been especially big in the team’s last 2 games, going for over 130 yards in each of them. Kansas has yet to allow a rusher over more than 63 yards this year. Miller is going to have his work cut out for him.

Kansas is going to have to find a way to stop TCU’s explosive offense in this one. TCU is ranked 17th, while Kansas is ranked 19th, but the Horned Frogs will still be 6.5-point favorites. Oddsmakers don’t seem to like the Jayhawk’s chances in this one. TCU is coming off a shocking 31-point victory over Oklahoma and will be looking to build on that momentum. The Horned Frogs were able to completely shut down the Oklahoma passing game and were able to gain the college football world’s attention in the process.

Kansas is on a magical run to this point. Their football program had become subject to social media memes prior to this season. Widely regarded as the most non-competitive football school in the power 5, the 2022 Jayhawks are finding a way to change their image. They’ll face their biggest test this Saturday. Another win will make their run even more improbable, and go a long way in giving their program the respect that they desire.

This game is going to be a slugfest from the start. Each of these offenses have proven that they can put up points. Each of the quarterbacks in this matchup is going to bring their A-game on Saturday. Duggan and Daniels will feast in the first half. Each quarterback will throw for 2 touchdowns and will be approaching 200 passing yards for the game. The game will head into halftime with the Horned frogs leading 21-17.

TCU will extend their lead in the third quarter after an opening drive touchdown and a costly Jalon Daniels INT, the Horned Frogs are given a short field. They capitalize after Max Duggan hits Derius Davis in the endzone for a 14-yard touchdown. The Horned Frog’s lead is extended to 35-17.

Daniels and company battle back and are able to cut the lead to 35-31 midway through the 4th quarter.

Duggan’s first INT of the year puts the Jayhawks in business. After taking a sack, Kansas is forced to settle for 3. Duggan takes his team down field on the next drive and a 37 yard touchdown run from Kendre Miller extends his team’s lead to 8 with 2 minutes remaining.

Kansas is able to move the ball into TCU territory, but after using two timeouts early in the half they are forced to rush the offense. It comes down to a 4th and 7 from the TCU 38-yard line with 26 seconds on the clock. Daniels needs to force the ball downfield, which he does, but the pass falls incomplete.

It was a good battle from Kansas, but it ultimately fell short. TCU remain unbeaten and will have a huge home game next Saturday against Oklahoma State.

Considering the score prediction above, our best Wicked Wager is the point total over 69. The prediction calls for TCU to win by 8 points so the value ATS is good as well. Steer clear of the moneyline in this one with little to no value, unless you parlay it with something else.