CFB Week 5 Rankings: The Judge’s Twelve in the Box 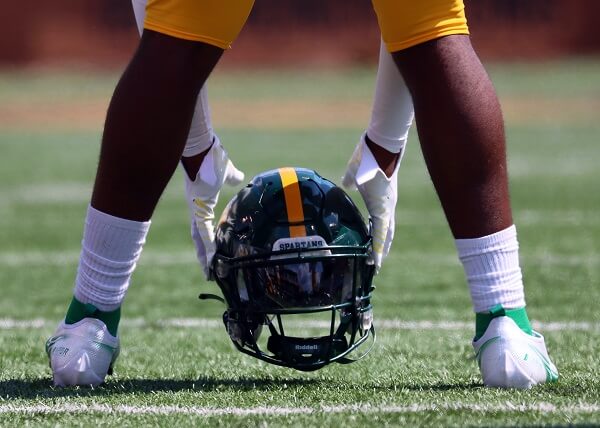 Welcome to Twelve in the Box. Here, you will see twelve teams making the biggest impact on college football. Is this a ranking?  Not really. You won’t find any numbers by the team names. Is this a power ranking? Sort of, kind of.  The Judge, here, will use his arbitrary sliding scale of indiscriminate factors to present the twelve teams (and three alternates) that Your Honor thinks you need to be paying attention to.

Just win, baby. Several top teams took that advice too literally in a week where we saw heavy favorites in some closer-than-expected games. We have officially made it through Cupcake SZN and are excited to see what conference play brings. There are some fresh faces this week, for both good and bad reasons. More newcomers look to join next week as others fall off.

Alabama fans appreciated their 55-3 win over Vanderbilt after watching several top teams struggle with inferior opponents in Week 4. Attention now turns from the first four games to the second four, which is the most challenging segment of Alabama’s 2022 schedule.

The Tide will get three ranked teams in a row, with two of those being on the road. Alabama will get two grudge matches sandwiched in the middle, with a much-anticipated home game against Jimbo Fisher and Texas A&M. They will then travel to play a Tennessee team that has a great deal of momentum.

We’ll find out just how good this Alabama team is in very short order.

Next Game: at Arkansas

Who had “blow a 28-3 lead” on their Appalachian State bingo card? The Mountaineers hanging around in Twelve in the Box is now getting to the point of loitering. App State gets the call for one more week due to another wild result. This one saw App State give up 29 unanswered points in a 32-28 defeat at the hands of James Madison. Everyone in Boone will likely be on blood pressure medication after these first four weeks.

To recap, we have had a 63-61 thriller against North Carolina, a 17-14 road win over 6th-ranked Texas A&M, a Hail Mary to win over Troy with College Gameday in town, and now a blown 25-point lead. It’s not even October yet.

Next Game: vs. The Citadel

Dabo Swinney said, “The only good thing about the game is we gave up six touchdown passes – we didn’t give up seven.”  Those remarks pertained to the Clemson defense after the Tiger’s slid past Wake Forest 51-45 in double overtime. This game goes to show two things. First, Dave Clawson should be celebrated for what he has done with this Wake Forest football program. Second, winning on the road in conference play is tough. Clemson found a way to get it done and has positioned itself well in the Atlantic Division. They will have another tough one next week.

Next Game: vs. NC State

Georgia’s grip on the #1 ranking loosened a bit after their 39-22 win over Kent State. It was a game where Georgia hardly looked like the national championship favorite. The Bulldogs turned it over three times and gave up a first down on a fake punt to the Golden Flashes. Georgia managed to win each quarter, but the game was closer than anyone wearing red and black wanted or expected. There is no reason to fret, though. We’ve seen this before with Alabama “struggling” to beat an inferior opponent and then Nick Saban talks about rat poison or a tin horn. Kirby has the team’s attention.

Next Game: at Missouri

Georgia Tech gets the nod this week for firing both their athletic director Todd Stansbury and head coach Geoff Collins. The move is not a surprise as Tech is currently one of the worst teams in Power 5. Collins finished his tenure with a 10-28 record, going 7-19 in the ACC. For a team positioned squarely in a talent-rich state, that record is simply not acceptable. Collins was given the task of transitioning away from Paul Johnson’s triple option system, admittedly a tough undertaking. Though with a coaching search, hope renews, and Tech is towards the front of the line for the coaching carousel.

Next Game: at Pitt

In a battle between two bluebloods, The Jayhawks bested Duke 35-27. In all seriousness, Lance Leipold and his Kansas team deserve your respect. If you are still conditioned to believe Kansas is a doormat and laughingstock of a program, you need to fix that immediately.

Quarterback Jalon Daniels is playing like a Heisman candidate, throwing for five touchdowns against Duke. This is a Jayhawk offense that is averaging 4.1 points per drive and 7.8 yards per play. Kansas claimed road wins against West Virginia and Houston. Each of those were by double digits. Rank them, cowards!

Next Game: vs. Iowa State

The Hurricanes never led in this game and never got within 14 points after the Blue Raiders took an early 24-3 lead. Regardless of what the Hurricanes do from this point, this game will leave a stench on the entire season. Fun fact: MTSU is now 3-0 all-time against Miami. Another fun fact: Miami is not back.

Michigan got the Week 4 win over a pesky Maryland team that would just not go away. In the Wolverines’ first actual test of the season, they looked a bit more pedestrian. If you like to play “ifs and buts”, Maryland is a mishandled kickoff away from sending that game to overtime. The Judge only deals in hard facts, and Michigan did what it needed to do to win a conference game. However, the gap between Michigan and Ohio State atop the Big Ten appears to be wider than initially perceived.

Big Blue will need to bring a better game on the road next week if they want to keep their loss column unblemished.

Next Game: at Iowa

The Buckeye offense was clicking against Wisconsin on the way to a 52-21 win over the conference foe. CJ Stroud found the endzone five times through the air and two Ohio State running backs eclipsed the century mark. How about that for balance? Since a slow-ish start to the season, it appears that Ryan Day’s team is finding its stride. The good news for Ohio State is that there are only two remaining ranked teams on the schedule. The Buckeyes will have to travel to Happy Valley in October and get Michigan at home to finish the season. 12-0 is very much in reach.

Next Game: vs. Rutgers

After a 17-14 win by USC at Oregon State, everything we thought we knew about the Trojans was flipped entirely. This is supposed to be a team with a juggernaut offense and an opportunistic defense. Instead, USC threw us a curveball in Week 4. We got a salty defense and sputtering offense in Corvallis. The Trojans offense came through when it mattered most, scoring a go-ahead touchdown with just over a minute left.

Does this change expectations for this USC team?  It depends on what your expectations were. Regardless, we won’t know just how good this team is until they travel to play Utah in Week 7.

Next Game: vs. Arizona State

Feels like ’98, baby! Not quite yet, but don’t rain on the Vols parade. The Vols knocked off rival Florida for just the second time since 2004. Tennessee led by 17 points before Florida made it closer than it should have been. The good news for the Vols, besides beating Florida, is they beat Florida with the Gators playing an excellent game. The bad news for the Vols is that defense.

Tennessee allowed Anthony Richardson to have a career day, throwing for 453 yards and two touchdowns while running for another two touchdowns. Luckily, the Vols have their own stud quarterback. Hendon Hooker is playing like a top quarterback in the country. He will need to keep playing to that level to provide the Tennessee defense some cover.

The Big 12 saw its hopes for a playoff team diminish greatly after both Oklahoma and Texas lost this week. For Texas, it appears that they are going to have to wait to be “back” for another year. The Longhorns let a 14-point second half lead vanish in Lubbock as Texas Tech prevailed in overtime 34-31. This was the Red Raiders’ first home win against Texas since 2008, when Michael Crabtree’s last-second touchdown gave the Mike Leach-led team the victory. Texas is still without quarterback Quinn Ewers, who sustained a sprained clavicle against Alabama. Getting Ewers back would go a long way towards righting the ship for this 2022 season.

Next Game: vs. West Virginia